Julia and Tim moving to Daylesford? ... rumours over News closing presses ... The Australian's climate sceptic of the day ...

Julia and Tim on the move? Crikey’s ears pricked up when a caller to 3AW today hinted that Julia Gillard and partner Tim Mathieson had bought a home in the delightful Victorian spa town of Daylesford. The hamlet, 90 minutes’ drive north-west of Melbourne, is famed for its hot springs, natural mineral water and tourist traps. It’s certainly easy to imagine Tim kicking back in the spa then indulging in a boutique beer afterwards.

Tips consulted John Evans, principal of John Evans Real Estate in Daylesford, who says Julia and Tim would be “welcomed with open arms” if the rumour were true. “It wouldn’t surprise me if the Queen tried to buy a property in Daylesford, it’s the most pleasant and beautiful place to live,” Evans declared. “[Gillard] could chill out here, she’d forget all her problems.”

News Corp to shut some presses? It’s certainly lean times for newspapers; a mole reckons this about the reborn News Limited (which is now News Corp Australia):

“News Corp Australia is about to shut down one press in every one of its major print centres to see if print production can still be meet. Senior management are calling it a press audit but in reality it’s seeing if they can maintain production and if so more staff across their sites will go after major redundancies have already taken place across their sites. The audit will happen for one week.”

We’ve looked into it, and there is a press maintenance audit going on, but News reckons it’s about seeing how far the presses are through their lifecycle, not about cutting back production. The company says there are no plans to shut down a press at each centre (some presses have closed recently). The official comment from a company spokesman was that our tip is not true. Let’s wait and see, shall we?

The Australian’s climate credentials. Today’s climate-sceptic-of-the-day in The Australian is Matt Ridley, billed as “a scientist and author” (here’s his piece on how there is nothing exceptional with recent weather events, plus comments on “the global warming scare”). The Oz didn’t have enough room to complete the byline, so allow Tips to do so. Ridley is the former chairman of the UK’s failed bank Northern Rock. He resigned in 2007 when the bank had to beg the government for emergency funding. The UK’s Treasury Select Committee looked into the bank’s near collapse and blamed Ridley for “damaging the good name of British banking”. Ridley’s website rather glosses over this interesting chapter, simply noting: “He was non-excutive [sic] chairman of Northern Rock plc”. 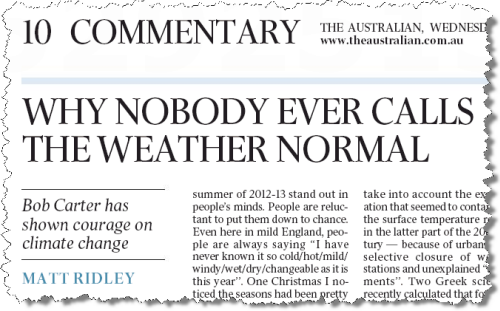 Ridley clearly knows a thing or two about risk, which, after all is what climate change is all about. Who will be the next climate sceptic in the opinion pages of The Australian? On Monday it was the perennial Henry Ergas (“Carbon folly comes at a price”). A week ago it was anti-windfarmer Maurice Newman’s turn (“Climate change science has become an expensive smokescreen”). Email us your guess as to who is next; first in with the correct guess gets a book from the Crikey stash. Tips’ pick: Danish statistician and man-about-town Bjorn Lomborg.

Press secs rotate. Perennial Wayne Swan staffer Adam Collins (he did a stint in the UK lately but couldn’t resist the Swan allure for long) has now headed off to work for Families Minister Jenny Macklin, the Oz tells us today. A tipster commented: “She’ll now have the about the highest number of press secs in the government! Interesting given she doesn’t do much media at all.”

Cater to stay. Don’t believe the rumours buzzing round Holt Street. The Australian’s opinion editor and The Lucky Culture author Nick Cater has not taken redundancy from the paper.

Spunky Turnbull. Tips has been running campaign material from our federal pollies, and we recently aired suspicions that Malcolm Turnbull’s images might be enhanced with the aid of Photoshop as we heard he was looking swell. A reader sent in this hard copy — what do you think? It’s certainly a different level to this photocopy job by Bob Katter’s crew. 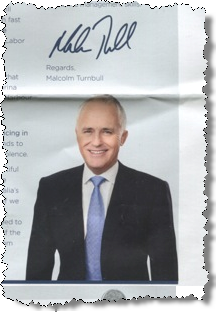 ‘We are burning our trust’: Abbott’s climate denials winning Australia no friends

A tough sell: can these spinners change your mind on climate change?

Re: The Australian’s climate credentials.

One thing for sure – whoever is the Oz’s next climate ‘sceptic’ (read ‘denier’), it is unlikely they (a) will have any actual creditionals, or (b) have actually studied the issue, or (c) have undertaken any original research, but they will almost certainly have a vested interest in either (i) denying there is any global warming, (ii) denying any global warming is a problem, (iii) denying there is anything that can be done about it, (iv) denying any action would be effective, or (v) denying we should be doing anying about it (multiple choice bingo – choose any one or more or all or the above).

That pic of Malcolm looks weird, because his head seems way too big!!! (and I don’t mean metaphorically). Photoshopped for sure around the waistline to make him look slimmer.