Snapshots from an American dystopia

Barack Obama has created an absurdist dystopia in which any sense of the ridiculous is overwhelmed. From drone strikes to force-feeding hunger strikers and spying on its citizens, this is change you can't believe in. 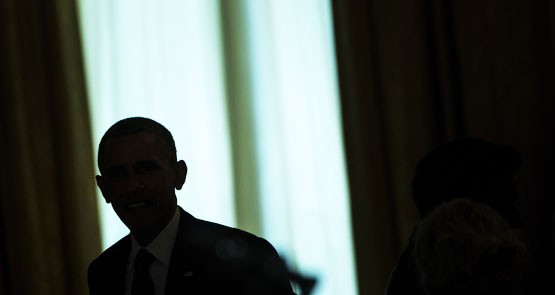 The American dystopia arrived slowly. Like the proverbial boiling frogs, few noticed it. And even if people did, often times they could pretend it didn’t exist, at least not for them. And most of all, everyone became inured to its rampant absurdities, accepting as normal and sensible things that, viewed with a modicum of perspective, were utterly ludicrous.

How to help the real victims of drone operations

In one picture (warning: graphic), the corpses of children lie in a row, a mother screaming in grief over them. In another, a blood-soaked father wails in anguish over a broken body. In others, children’s bodies are shown ripped apart or hideously burnt. They’re some of the more than 120 children confirmed to have been killed by Barack Obama’s drone strikes in Pakistan and Yemen. Many of these killings are not accidental. According to the US marines, Afghan children might be combatants, and so the marines have “widened their aperture“.

The American priority, however, is the health of drone operators. Neither the CIA nor the Defense Department have conducted any study of the civilian victims of their drone killings. But the Pentagon commissioned an extensive study that found drone operators suffer from depression, anxiety and post-traumatic stress as much as people in combat despite being thousands of miles from conflicts and able to see friends and family like any other citizen. The stress is apparently so great it was proposed to create a special combat service medal for drone operators, before the Pentagon abandoned the idea in the face of criticism from veterans who’d actually seen combat.

How to punish killers

Among the children killed by drones was 16-year-old Denver boy Abdulrahman Al-Awlaki, incinerated by a drone strike in 2009 while in Yemen looking for his father, a US citizen who’d been executed without due process in a drone strike two weeks before. Abdulrahman’s death was later dismissed as a result of him being “in the wrong place at the wrong time”. The man responsible for Al-Awlaki’s death, Obama’s counter-terrorism director John Brennan, was not charged with homicide or manslaughter, but promoted by Obama to head the CIA.

How to reward whistleblowers

Thomas Drake, a former National Security Agency official who revealed to the media stunning incompetence and possible corruption within his agency in relation to the Trailblazer Project, for which the NSA paid the company SAIC many hundreds of millions of dollars and never received a working product, was prosecuted in 2010 under the Espionage Act. Drake is one of now eight whistleblowers to be charged under that Act, making the administration of Barack Obama, who promised to make life easier for whistleblowers before being elected President, a bigger user of the Espionage Act than all previous administrations combined.

How to support a free press

The US army long ago blocked access for its personnel to the WikiLeaks website. But recently it also blocked access to The Guardian website, in case defence personnel see revelations about the extent of NSA spying. Nearly all of the revelations, however, were also carried in the Washington Post, which wasn’t blocked. Going further, the Pentagon recently advised all of its staff to report anyone seen reading satirical news site The Onion or news site Salon.com as potential security threats.

How to fight terrorism

The Republican chairman of the House Subcommittee on Counterterrorism, Peter King, has for 30 years been a strong supporter of the IRA and is on the record as refusing to blame it for the murder of civilians. As late as this year, King called for a former IRA member and prison escapee to be given bail. Recently King called for the prosecution of journalist Glenn Greenwald for the Edward Snowden revelations.

How to promote internet freedom

Hillary Clinton, on the internet in 2011:

As she was speaking, the Obama administration was engaged in a vast, secret internet surveillance program of American and foreign citizens, companies and other governments and issuing secret subpoenas to access journalists’ internet and phone records.

How to respect Islamic traditions

Obama, having promised repeatedly to close the Guantanamo Bay facility, now presides over a force-feeding regime for 45 hunger strikers there; more than half of the remaining captives in the prison have been cleared for resettlement but left there by Obama. But his administration has defended its force-feeding, claiming it wasn’t doing it in daylight hours during Ramadan.

How to respect the need for truth in public life

The Director of National Intelligence, James R. Clapper, lied to Congress in March when asked about NSA surveillance of American citizens. Clapper has altered his story several times on what he admits was “clearly erroneous” testimony, and only admitted the lie after the Edward Snowden revelations, despite his questioner, Oregon Senator Ron Wyden, privately giving him the opportunity after the hearing to correct the record. Despite lying to Congress being a criminal offence, Congress is not considering any action against Clapper at this time.

To function effectively in Obama’s dystopia, one needs to deaden one’s sense of the absurd. Either that, or constantly inflate it, so that what was by previous standards ghoulish, or ridiculous, or patently illogical, is now not merely accepted, but may well be official policy.

Only if you can do that will you see change you can believe in.

Deeply depressing BK.
It reads like a Monty Python plot that escaped from the asylum and is stomping on everyone in sight.
All the sadder for being true.

Loop-hole for “Reward for Whistleblowers” :- Obama “promised to make life easier for whistleblowers before being elected President” – there you go, how many of them get elected?

I second the motion of thanx to BK for a great piece.

But please eschew the common mistake of calling the country between Canada and Mexico ‘America’. As Austin Mackell wrote in yesterday’s Crikey about Ecuador, people in Latin America resent the US’ colonisation of the name ‘America’ which of course refers to the whole continent, not just its most powerful country.

At least the Yanks can take comfort knowing they reside in G0d’s own country.