Maybe it's time for the Libs to follow Labor's example and undergo a leadership spill? Plus other political views noted along the way.

It’s never too late. Good to see a variation on the leadership change story this morning. From the op-ed page of The Australian:

Now wouldn’t that make it a truly spectacular election campaign? Malcolm Turnbull replaces Tony Abbott on the day the election is called!

A word of warning to Rudd: remember 1983. It is never too late to change leaders. Go sooner rather than later.

Nearing the half century. All the signs are point to more than 50 political parties contesting this election. The Australian Electoral Commission website lists 47 approved this morning, with another nine on the waiting list for final approval. It will surely make the Senate voting papers things to behold, and the election of the final senator in each state will be a wonderful lottery.

Call me old-fashioned. In all my 50 years covering politics I don’t think I have ever addressed party leaders or ministers in public by anything other than their title, as “sir” or with a “Mr” or “Mrs” in front of their surnames. I was taught that familiarity and pretended friendship did not fit with the need for a journalist to at least make some pretence of neutrality.

Things have certainly changed. On Q&A this week is was Anthony this and Malcolm that as if Tony Jones really believes that he was another insider. And on Darwin’s Mix 104.9 yesterday it was just downright familiarity between host Pete Davies and Prime Minister Kevin Rudd, as noted in the Oz‘s Cut and Paste: 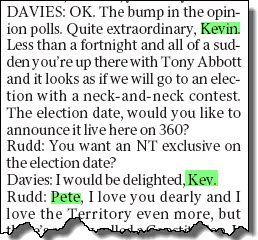 Obama’s judgement in question. Republicans have been gifted a new weapon to use in their battles against Barack Obama. The President has publicly declared that broccoli is his favourite food. 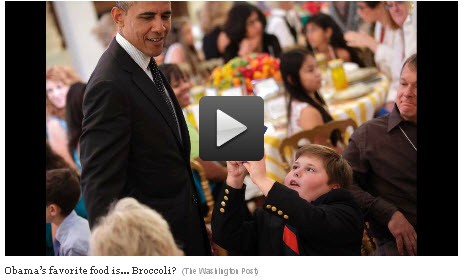 Tony Abbott has always had an abysmal rating as preferred PM. Not many people really like him. It is time for him to now step aside for Malcolm Turnbull if they want a chance to win the next election…why? There has been a change in stewardship of the Labor Party and the polls show there is now a big problem for the Liberals. The real poll is not far away, time is of essence ignore it at peril.

Tony also tells big porkies… after much hype Whyalla did not disappear from the map, nor do Sunday leg of lamb roasts cost close to $100 because of the carbon tax.

Making those predictions scared the elderly into thinking their world would end, Tony should be very ashamed of himself. Has Tony also been down the Peter Slipper trail of travel inconsistencies? Some say yes and the amount is 10 times that of the much maligned Peter Slipper travel matter.

Yes but Turnbull believes in climate change so that does him out of being leader for the Luddites dominating the Coal-ition.