As the British Labour Party struggles with a preselection battle in a Scottish seat, the Left in Britain and Australia tries to reinvent itself ... with or without unions. 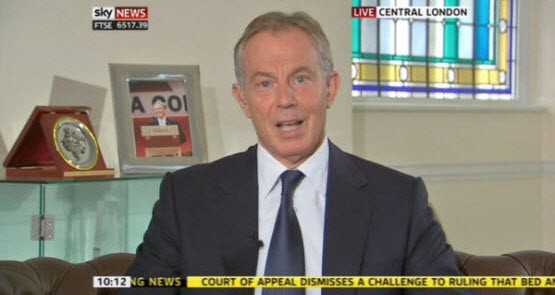 Poor old Tony Blair. Yes, you heard that right. He’s reached that point where he is so loathed that no one will help him, not even TV segment producers on Sky. Thus it was that the Great One himself was featured on a taped news segment, grinning wildly, sitting in front of … a wall-mounted photograph of himself, grinning wildly. It was a damn weird effect, eternal regress, as if he were somehow vanishing up his own fundament. What possible motive could Rupert Murdoch’s network have for thus discombobulating the Great One?

Blair was speaking in praise of Ed Miliband, who, political obscurantists will know, is leader of British Labour. Miliband has been presented with a dilemma/opportunity mirroring that of Chairman Rudd, with the sudden focus over here on preselection for the seat of Falkirk, in the south of Scotland. The seat was safe Labour until recently, held for the last 13 years by Eric Joyce, a piece o’ work — ex-army, a past critic of the armed forces’ “s-xist, racist” character and a strong critic of the Iraq and Afghanistan wars, who has in the last few years twice assaulted Tories in a Commons’ bar, and allegedly had an affair with a 17-year-old schoolgirl workie. Labour withdrew the whip some time ago, although for south Scotland, or indeed anywhere, it was probably tempted to ditch the “Eric Joyce is no longer one of us” line for “Eric Joyce: he’s a bloody legend”, especially with the Scottish National Party coming up the drainpipe.

Labour still believes the seat is safe enough to have a stoush over, and it is locked into a preselection battle with the UK’s super-union UNITE, which covers a vast range of manufacturing and service trades. With 1.5 million of the peak body Trades Union Congress’s 6.2 million members, it is five times larger than any other union (save for the public service outfit UNISON). In the period of the Con-Dem government, the union has moved somewhat to the Left, under new head Len McCluskey, a former docker, supported by the United Left faction, who see it as their mission to stop Miliband, E. doing a leap across to a renewed Blairism.

That has involved some, erm, aggressive, campaigning for preselection, and in Falkirk it appeared to involve a mass sign-up of several hundred new party members, some of whom were unaware of their newfound enthusiasm, since UNITE had paid their membership directly to Labour. As stacks go — the art of it is so undeveloped the Brits do not have the word — it is all pretty lame; when you’ve picked up 200 Iraqi Kurds at Tullamarine and bussed them straight down the Great Ocean Road to get the Services Office of the Amalgamated Snivellers over the line, come back and talk to us. In the Falkirk case it involved getting up the office manager of UNITE ally Tom Watson (better known to Australian readers as the hammer against the Murdochs) Katie X — after an all-woman shortlist was imposed, it being thought that there was less chance the resulting selection would nut Tories and cop off with a schoolgirl, though being Scotland, really no more than 30% less likely.

“Just as the ALP has no desire to play the Central Committee in Chairman Rudd’s ongoing Maoist opera … it also has no choice.”

But the fuss has been sufficient — funnelled through the Murdoch press, eager to nobble Watson and wreck the Labour-union link more generally. Watson has resigned as Labour campaign co-ordinator as a result. The intent to consolidate union power within Labour has gone pretty spectacularly badly since Miliband, E. has now seized the opportunity to redefine Labour’s relationship to the union movement, arguing for two big changes, including that union members will have to make a positive decision to have part of their membership fees passed along to the Labour Party. Miliband is also talking up the possibility of primary-based selection of candidates.

The move initially confused some people, since Miliband had gained his support for the leadership from the block union vote, which allowed him to prevail over brother David’s support in the parliamentary party. Things got even more confusing when McCluskey came out in favour of the move. But it has a double purpose: part of an attempt to clear the decks so Labour can go after secret Tory and LibDem donors as the election nears; and more importantly, preparation for going after a Right group in Labour called Progress, which is run by Lord (David) Sainsbury, former Labour science minister and supermarket heir. Sainsbury has reportedly funnelled nearly half a million quid into Progress, which is organised as an intra-party party. Miliband and McCluskey are eager to bust them down, and the new rules are part of that.

Of course, the move is fraught with risk, for what exactly will the gap between block fees and individual contributions be? And who would fill it, apart from more corporate and industry-sector donations?

Whether Miliband and an in-group wanted to do this at all is another question. Just as the ALP has no desire to play the Central Committee in Chairman Rudd’s ongoing Maoist opera (it’s now 1967 and Rudd has stirred up the Shanghai high school students to besiege the party centre), it also has no choice. What has been happening across the world — from Tunisia to Zuccotti Park to Moscow Airport to Taksim and beyond — has started to impact on Labo(u)r  parties. No matter how congealed and corrupted, such parties are representatives of a social will, and they cannot but respond to it, in some fashion. That can be a weakness, but it is also a strength, because it can act as a focus for renewed energy and a regrouping of progressive social forces. The Right, by contrast, is a thin veneer over capital.

It is stunning to note what a dead weight the Right becomes when things start to go wrong again, and how — in Australia, at least — it has to be pretty much propped up and moved around by capitals’ agents, Weekend At Bernie’s style, or like a dead cow caught on the front of a steam locomotive. It’s a measure of Labour’s reserves that Blair is now popping up like some blogger with a YouTube channel, a picture of himself stuck to the back wall to remind himself who, if anyone, he is, desperate to get back in the fold again.

The only question is how far the process will go, how much the vested interests would allow the process to continue, and whether they could stop it once begun.

Rundle: past and future ghosts at Corbyn’s last stand

Having sold your soul to Murdoch, what have you got left to trade?

Good to hear that Tom Watson’s party duties have been alleviated and he’ll now have more time to hunt down the Dirty (ex) Digger.