Paul Howes the new Right darling. It’s not often you see unionists and, well, anti-unionists on the same page. But at yesterday’s annual HR Nicholls Society conference in Melbourne — that’s the Right-leaning industrial relations gang formed under the shadow of Peter Costello — there was a round of applause for the ACTU’s Paul Howes (in absentia). Earlier this week Howes said corrupt union officials should face the same legal liabilities as corrupt corporate directors.

Howard-era minister and union attack dog Peter Reith went further, saying he thought there should be a royal commission into union corruption. “There’s too many examples of it happening. And frankly, it’s in the interests of the union movement to have it,” he said. Tips wonders whether Howes would agree?

Visa teaser … We’ve heard a great deal lately about possible rorting of 457 visas (mainly from the people who run it). This insider reckons IBM is gaming the system:

“IBM brings over Indian IT workers on 457 visas to train them up to take jobs back to India. That is what is happening to Sensis IT jobs right now for example. This is an abuse of the 457 visa system. IBM took over the Sensis IT jobs from Sensis/Telstra this year. Telstra and IBM collude in this process. Given IBM is actively offshoring local IT workers jobs at the moment none of us at IBM has the guts to speak out as you’ll just put yourself into the firing line.”

We put this to IBM, and a spokesperson said said: “IBM does not comment on rumour or speculation. IBM fully complies with the 457 visa laws in Australia.” Ouch! That is no way to speak to Tips.

… and more concerns about outsourcing. Yesterday we raised concerns that with ANZ back-end work increasingly outsourced to Bangalore, private customer data was being transferred to India. In response, ANZ told us its Indian staff adhered to “the same strict privacy requirements” as here and were “bound by Australian privacy laws”. We asked for your inside information. This tipster thought it was not really a problem:

“I worked on a similar outsourcing of back-room admin processing for a large financial services company, we moved the jobs while keeping the existing business applications using Citrix, which is a bit like Microsoft Remote Desktop, but frankly it is trivial to have all the applications and data remain in Australia with the human anywhere with an internet connection. This isn’t a new issue or even a big one as far as privacy is concerned because the banks generally have very tight security around controlling and auditing who can see and do what to various systems.”

But this tipster is not so sure:

“I did some process analysis work at a Westpac processing centre and found that one process was continually being knocked back by management. It dawned on me that this particular task was to be off-shored to India. They ‘fessed up; they wanted this process designed so if the bank had to speak to the customer, it would not be done by an Indian, but by someone in Sydney. I asked them about data protection and privacy and the middle manager concerned said that the data would always be in Australia. I suggested that what she meant was that the data would hosted in Australia, because as far as I am concerned, if someone is viewing customer data in India, that data is in India. That went through to the keeper. As for ANZ staff in Bangalore being ‘bound by Australian privacy laws’, I would have thought that Indian laws would apply in India, not Australian laws. The task to be off-shored was one the bank charged $12 for and took staff (low-paid temps) one minute.”

So that’s how our big four banks manage to be so splendidly profitable.

Mad as a Katter. There have been some great ads for candidates lately, but this is the current favourite in the Crikey bunker. 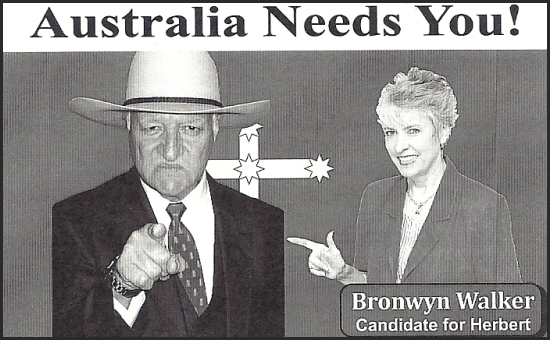 “This flyer was put on windscreens around the Townsville 400 V8 event on the weekend. Despite the fashionable southern belief that everyone north of Noosa is living in the 1950s, this was such a slapdash black-and-white A4 home printing cut-and-paste effort that it was self-defeating. It’s known locally as The Cut Snake Party … unable to work out if Bronwyn Walker was suggesting Bob should be shot, or just saying what a card,” our supplier said.

If you’ve received some advertising from candidates, please funnel it to Tips. Is Malcolm Turnbull putting out glossy material with lots of photos of himself that appear tan-tastic and might be maximised with the assistance of Photoshop?

Tony’s slip-up. Peter Slipper — facing court over allegedly defrauding the Commonwealth for using Cabcharges worth about $1000 to visit wineries, etc — is excited about Margo Kingston’s revelations that Tony Abbott had to repay taxpayers $9400 for using travel expenses to promote his book. Here’s Slipper on Twitter. Does he have a point? 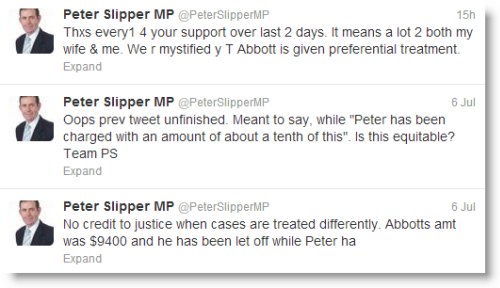