Full of hot air: the <em>Oz</em>‘s case against a non-existent wind turbine

The Australian is warning us about the health impacts of wind farms. But its "research" is entirely discredited, writes energy industry researcher Ketan Joshi.

Graham Lloyd, environment editor at The Australian, is today warning us of the dangers of low-frequency noise from wind turbines. That the turbine referenced does not exist is an afterthought. Lloyd cites a report, A Proposed Metric for Assessing the Potential of Community Annoyance from Wind Turbine Low Frequency Noise Emissions, as an example of the threat wind turbines pose to the human race:

“Our experience with the low-frequency noise emissions from a single, 2-MW MOD-I wind turbine demonstrated that, under the right circumstances, it was possible to cause annoyance within homes in the surrounding community with relatively low levels of LF-range acoustic noise.”

Sounds convincing, right? The MOD-I wind turbine was a downwind NASA prototype, built in 1978 and removed in 1981. The paper itself was published in 1987. From the Wiki page about the MOD-I (emphasis added):

“Low-frequency noise from the heavy truss tower blocking the wind to the downwind rotor caused problems to residences located close by.”

Modern wind turbines are upwind, rather than downwind, and as such, don’t have the same characteristic problem cause by the tower being in front of the rotor. The South Australian Environment Protection Authority recently released a comparative report on low-frequency noise emissions from modern, upwind turbines (unmentioned by Lloyd in his article):

Lloyd does admit that citing a 26-year-old report referring to a prototype, nonexistent wind turbine that was never installed in Australia isn’t quite right:

“Clean Energy Council policy director Russell Marsh said the study was not relevant to modern turbines. ‘This is the equivalent of taking a study about Ataris and applying it to the latest iPads,’ Mr Marsh said.”

However, that admission is not central to his thesis: 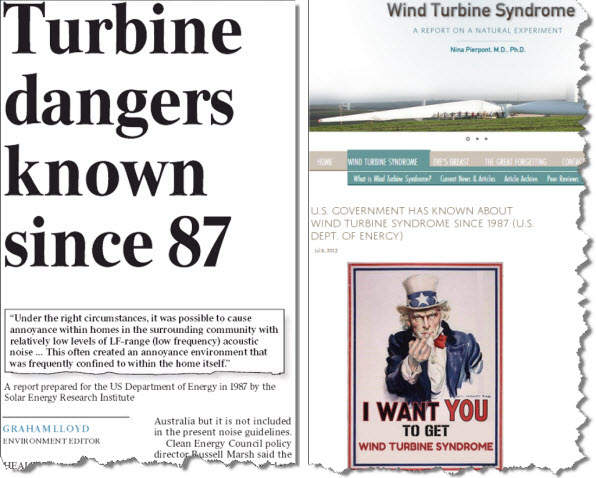 So why report a decades-old piece of research on a prototype wind turbine like it’s breaking news? It’s a technique Lloyd has used before: have a look at these sentences from an article published in April 2012:

“Village resident Neil Daws is concerned his chickens have been laying eggs with no yolks. Ironically called wind eggs, the yolkless eggs can be explained without wind turbines. But together with a spike in sheep deformities, also not necessarily connected to wind, reports of erratic behaviour by farm dogs and an exodus of residents complaining of ill health, Waterloo is a case study of the emotional conflict being wrought by the rollout of industrial wind power.”

By simply presenting two completely irrelevant facts in close proximity, Lloyd lets the reader assume the two are linked. So where did Lloyd get this 26-year-old scoop? That would be windturbinesyndrome.com, attempting to stimulate rageby distributing outdated research on prototype machines. Lloyd claims:

“The research was sent by an American acoustics expert to Australian wind health campaigners and has now been published internationally.”

Well, no, it was already published internationally: see here, here, here, here, here, here, here,here, here … you get the idea. It’s an old piece of research, which has been mindlessly re-hashed by anti-wind groups and picked up by Lloyd with motivated glee. In the absence of evidence of any harm from wind turbines, awkwardly and unashamedly shoe-horning irrelevant, outdated research into contemporary media is, presumably, the last resort of anti-wind turbine activists.

*Ketan Joshi is the research and communications officer at Infigen Energy. This article was first published at his blog Some Air.

Did The Australian misrepresent the ‘hippies of Nimbin’?

I’m sure wind farms will make the curtains fade, too.

Remember the days when The Australian was an ok newspaper?

In its current form, they would decry a cure for HIV as black sorcery if there was any hint that an initiative by the Greens had some sort of input in it.

The Australian has completely forfeited any right to be taken seriously on science/environment reporting. After dredging up a discredited study from years ago to argue that climate change is caused by the sun, Lloyd serves up this effort. Sometimes I wonder if he’s simply having a joke, or if it’s an infantile tantrum in response to the criticism of scientists and Mediawatch.

“Bad science reporting you say? Well what do you think of THIS?”

Excellent stuff KJ
There’s nothing quite so satisfying, as the sound of a well aimed boot, thudding into one of the Oz’s least impressive scribes.
*GOAL*.

Mr Joshi, I understand the Infigen Energy position on whether the noise from currently installed wind driven power generators are an imposition on other people, which Infigen, as a wind farm business model driven operator/provider they would be expected to have, and consider these impositions to be negligible…
Going back to basics: Are there times and circumstances where normally hearing folks can hear the wind driven turbines on their property? If so then that is already an unacceptable imposition and an intrusion on their privacy and space.
Very simple.
I have not read nor do I need to read these reportws, as I only have this very simple question: Are they audible for people who live in the vicinity? If sub-audible but measurable, is the evidence incontravertible that no damage or stress is caused to folks in the vicinity? If not, then they should not have been built there.
I am a big fan of wind power, but as with most things the where, when, how factors relating to other people’s lives are critical and should be the deciding factors..