Could Labor actually win this election? Plus other political snippets noted along the way.

Labor back in the game. I detected a more strident tone to the rhetoric of Coalition MPs yesterday when they discussed the question of how to stop the arrival of unwanted migrants by boat from Indonesia. It suggested to me that they were still a bit rattled about how to campaign now that Labor has a new leader.

They will surely be even more rattled today after Newspoll came out with its 50-all draw figure, and Morgan has Labor now actually leading. The market has adjusted quite sharply. Betfair this morning: 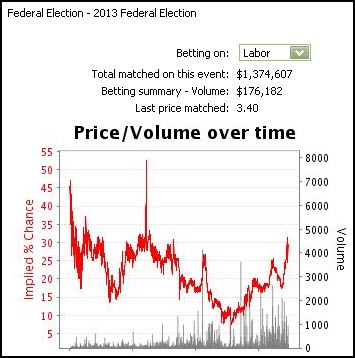 Rudd bravely takes on the union bosses. Kevin Rudd has gone for one of those crash through or crash moments. His plan to change the way the leader of the federal Parliamentary Labor Party is chosen would smash the power of those “faceless” union bosses. The Rudd proposal leaves unions out entirely from the selection process. He wants the parliamentary caucus to provide half the voting power, with rank-and-file members having the other half.

It is an audacious plan to change the way that Labor is governed, and trade union leaders, at least privately, will be furious at the threatened loss of their power. In most Labor forums unions have half the say, and British Labour has gone for a tri-partite voting arrangement to select its leader with equal say for MPs, affiliated unions and ordinary members.

The lobbying between now and when the caucus meets in a fortnight to consider the Rudd proposal will be intense. Not that a success for Rudd there will be the end of the matter.

I am no expert on that arcane area of knowledge that makes up Labor Party rules, but the caucus alone can not conduct a ballot of ordinary party members. It is state branches that have the names, and some rule changes will be needed for them to be polled on the leadership. Just how the Prime Minister plans to get those changes made has not yet been spelled out, but presumably there will need to be ratification of the plan at national and state party conferences.

At the very least changes to deal the unions into the process will be bitterly fought for. Rudd can but hope to contain the fighting from public view until after the election. It seems to me to be another good reason to go to the polls ASAP.

A dash of cheerful gossip. Those interested in the comings and goings of the Murdoch empire will find an update by the media mogul’s biographer Michael Wolff a good read. In “Rupert Murdoch relishes life after Wendi“ , Wolff, clearly delighting in a bit of a get square for an interest Murdoch took in his personal life after the publication of his biography, relays briefings by Murdoch’s circle against estranged wife Wendi Deng.  It is a story “so juicy and so novelistic”, he writes, that even his closest associates and family can’t resist it.

“They can hardly believe it themselves. They all want to be part of it and want you to know they have compelling views about it.

“They feel obliged, too, as insiders, to militantly close ranks around him. In their telling, his wife Wendi is simply “a terrible person” – which, they whisper, everybody but Murdoch always knew: her social life is out of control. The partying has been non-stop. She spends money “as if there were no tomorrow”. All discretion gone.

“In this novelisation, then, she is Anna Karenina.” 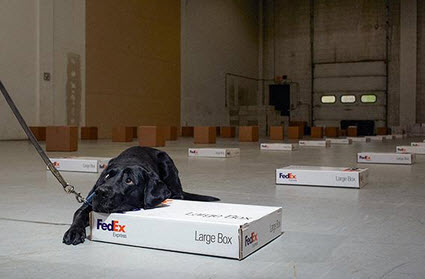 “The only thing that can save the Coalition’s chances now, is the Labor Party!”?