As the world waits to see if Edward Snowden will make it to Ecuador, Austin Mackell, a freelance journalist based in Quito, says it's a banana republic no longer. It is often difficult to reconcile the Ecuador I wake up in every morning with what I read about in online media and hear about on satellite TV news.

Rather than the kooky left-wing authoritarian basket case in an all-out conflict with the United States, I experience a booming vibrant country that’s found a workable combination of solidarity and free enterprise, and a clearly effective and highly popular leadership recently re-elected with a landslide in elections that not even the hysterical right-wing opposition media seriously alleged were rigged.

Oh, it is also full of Americans (or United States-ians, as people in Latin America prefer to call them, considering themselves “Americans”, too). The city of Cuenca in particular, with its perfect weather all year round, has become a retirement hotspot for Americans who want to take advantage of the fact that not only is Ecuador on the US dollar, but its prices are a little closer to what they remember from the good old days. Ecuador was recently named the world’s top retirement destination by International Living Magazine for the fifth year running.

Twenty years ago Quito was one of the cheapest places in the world, because it was one of the poorest places in the world. The fact that prices have not spiralled wildly out of control with newfound industry, as can happen in a Third World city seeing a burst of investment and/or prosperity, is testament to the skillful economic management of President Rafael Correa, a former economics professor who came into government following a decade or so of mass social unrest and political and economic crises.

There is surprisingly strong support for this Leftist leader, even among the English-speaking upper middle class, and support is stronger among those who live in the poorer barrios. The Ecuadorian government’s support for WikiLeaks founder Julian Assange, and now whistleblower Edward Snowden, is among the government’s most popular policies.

But politics isn’t at the front of everyone’s mind; people are just focused on enjoying life. This calm reveals an apparent security and perception that the long-hated US government (which Ecuadorians are very able to distinguish from its citizens) lacks effective pressure points by which to punish its one-time vassal state.

This was demonstrated by the recent withdrawal of Ecuador from a US-Andean trade deal under which Ecuadorian goods receive preferential customs treatment. The deal was up for renewal at around the same time that talk of Snowden receiving asylum from Ecuador was at its peak (a prospect still on the cards if he can reach Ecuadorian soil). US pundits tried — and failed — to use the deal as leverage to convince Ecuador to refuse Snowden asylum.

This growing impotence hasn’t stopped US attempts at meddling (as recently as a 2010 police-led coup attempt), but Correa’s “citizens’ revolution” seems to have some time and room to move. Given his success so far, and the fact that in the last general election his party took control of the legislature, big things are to be expected.

A new set of media ownership laws (when Correa came to power, the banks, which he had a democratic mandate to regulate, owned five out of seven TV channels) are coming, granting a third of all frequencies to community broadcasters (with another third each for private and public broadcasters, including from state and municipal governments).

Water and land reforms are also under way, with the Ministry Of Water (created under the Correa government) now dealing with thousands of disputes that would have in the past been determined by the brutal arbitration of “facts on the ground”.

Among one of the most exciting places to look for new developments is the “solidarity sector” comprised of co-ops, community credit unions and the like. It already contributes around 40% of the country’s GDP and provides as much as 70% of the full-time employment. More people in Ecuador work without a boss than with one.

‘Una papa caliente’: what Ecuador is playing at 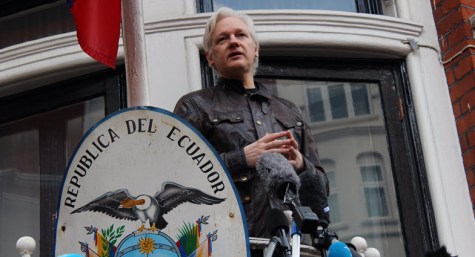 Perhaps they could rename the Ecuadorian embassies “Backpacker’s lodges for US whistle-blowers” Add cafes for those of us that’d like to buy Julian or Edward a coffee, and they could turn a profit (Ecuadorian coffee only, of course)

Ecuador, of course, was one of the original banana republics, vassal states of the empire of the United States, dominated for many years by corporations such as the United Fruit Company.

Alluded to in the article, Scott. What was your point?

I truly admire Ecuador and its leader, Rafael Correa as I do the other Latin American counties with left wing, independent governments like, Bolivia, Venezuela and Nicaragua.

I only wish Australian and the European governments would follow their lead, particularly in breaking free of the egregious, militaristic dominance of the US but also in moving to the left.

It is clear to me that the US is basically running wild and the support of countries like Australia are giving it the confidence to go even more berserk.

I believe that our foreign policy should no longer be a side issue but an important election issue and the two major parties strongly challenged as the Greens and Wikileaks parties plus others are beginning to do.

Ah but for a bit of media coverage on the issue.

My point was to remind people of the history that is bound up in the term banana republic. It has developed a popular meaning that obscures its origins. It is often used in a pejorative sense as if the country itself or its citizens were at fault. Yet the historical reality was colonialism. Countries such as Ecuador have genuine historical reasons to distrust the United States, going back a long time.

When Paul Keating used the term in reference to Australia, I had no knowledge of its origins and meanings. I had a somewhat cartoonish idea of funny South American countries that staged coups and counter coups every week. Since that time I have read a little bit of the history of several of these countries. One revelation was the realisation that many of the actual coups were instigated by outside forces.

For most of my life, Australian media has almost totally ignored South American countries, except, on rare occasions, to spin morality tales of the evils of socialism. It is refreshing to read articles like this one.