As investigators pick over the wreckage of the deadly Asiana 777 plane crash in San Francisco, Australian safety authorities have a lot to learn. Especially about themselves. 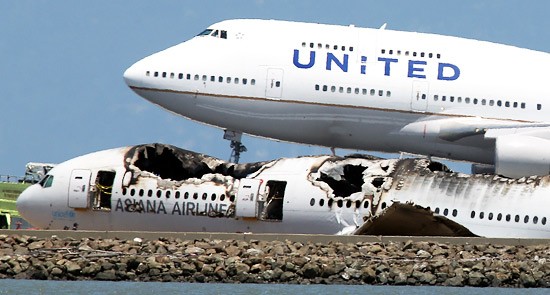 The Asiana 777 crash at San Francisco airport on Sunday was the first air disaster reported instantly on a massive scale by social media.

The world could see passengers hauling their bags away from the burning 777, showing how ineffective cabin safety emergency evacuation rules are, while some of the bay city’s news crews were still scrambling to get on the road to the crash site — which was of course locked down in emergency mode.

The next day, when the flight data recorders were still warm to the touch (metaphorically speaking), the brutal truth about how the Korean airliner was handled by its pilots was being read out by Deborah Hersman, the chairperson of the US transport safety investigator, the National Transportation Safety Board.

It was all too late. But only two out of 307 people on board died, one apparently run over by an emergency response vehicle after being flung onto the runway after the tail broke off.

The immediacy and transparency of the disclosure of the horror — and the factual elements of the jet’s trajectory on approach to impact — has massive implications for the public administration of air safety around the world, including Australia.

Until this week it would have been unimaginable that the Australian Transport Safety Bureau, our safety investigator, would release the factuals as quickly as they could be read off the flight data recorders. And there is no doubt the current ATSB — or its UK, French, German and other counterparts — would resist such instantaneous but neutral, non-judgemental disclosure.

This will change. The common cultural setting in air safety investigators outside the US (which has become much more open in recent years) is to take years to release a final report, which is reviewed and massaged by the various stakeholders and their spin doctors before being released in a form that often requires careful analysis to “release” the truth.

Although it might seem like a very straightforward crash, at this stage, the Asiana prang’s treatment by the NTSB signals an end to cover-ups in crash investigations, and theorising by pundits and reports.

The immediate release of key data even in a complex accident will signpost the areas of concern. Some suggestions as to where such candour would have led in recent Australian accident investigations were made in an article on Crikey blog Plane Talking.

As a matter that can solely be established by recourse to the privileged documents generated by the recent Senate committee inquiry into the conduct of the Civil Aviation Safety Authority and the ATSB into the latter’s investigation of the Pel-Air aerial ambulance ditching near Norfolk Island in 2009, this was a rotten conspiracy by both bodies to cover up maladministration by CASA and entirely blame the incident on the pilot.

It is one of the most disgusting exposes of maladministration in air safety in this country ever, and certainly the most detailed; the Hansard of those proceedings includes a certain admission and apology by the director of aviation safety at CASA John McCormick, while the report by the Senate committee devotes an entire chapter to its loss of confidence in the testimony provided by the chief commissioner of the ATSB, Martin Dolan.

The pressure the NTSB’s conduct of its Asiana investigation will bring on the legacy of secrecy and cover-up in the public administration of air safety in Australia may well bring integrity and transparency to the conduct of CASA and the ATSB. Starting, many hope, with the withdrawal of the deeply flawed ATSB report into the Pel-Air crash, and its replacement with one that is honest and comprehensive.

It is terrifyingly easy to plant a bomb on an airplane

Why are victims of Pel-Air crash not entitled to compensation?

Hardly. Two people died before the evacuation commenced. Everyone else got out safely and rapidly before the fire kicked in (same as AF358).

The fact that the evacuation was a total success even though a few people broke the rules and brought their carry-ons along is a good thing. It shows that the system is robust enough it doesn’t require 100% passenger compliance, which would be more or less impossible to instill or enforce.

That pilot broke so many basic flight rules, it was amazing, in such a high tech aircraft.

Much more investigation needs to take place prior to determining the cause of this crash. It is not appropriate to crucify the pilot in charge at this stage. Wait until all the facts are known before making an assessment of blame.

I agree with johnb78 that their air crew behaved impeccably in clearing the aircraft expeditiously and by doing so, showed their professional skill and in all probability saved numerous lives.

The cabin crew should have been doing the landing or maybe just giving a bit of advice on final.

The unfortunate deaths notwithstanding, it seems to be a pretty ad for the robustness of the 777.

If it ain’t Boeing I ain’t going. And probably not even then – I hates flying. Hates it. Even more now.