Here’s the full story on workplace deaths under Labor

As the pink batts program hits the front pages again, there's plenty of finger-pointing at Labor over workplace deaths. Look at the full picture, however, and it's a very different story.

With claims of the Rudd government’s culpability in the deaths of insulation installers under the Housing Insulation Program once again receiving attention, it’s timely to look at how workplace safety has fared under Labor.

Since 2007-08, according to data from Safe Work Australia, the incidences of compensated workplace fatalities have fallen by one-third, rapidly accelerating a slow downward trend since the turn of the century. 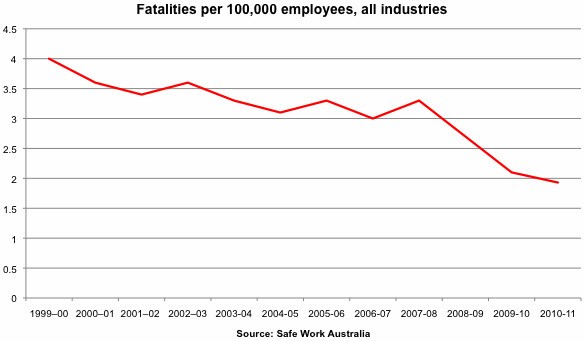 The most recent data suggests the number of deaths per 100,000 workers fell below two in 2010-11, although this figure is likely to be adjusted upwards as more data for that year becomes available. Conservatively, that means 100 fewer people died than otherwise would have.

However, Australia’s least safe industry continues to be agriculture. Agriculture is one of Australia’s smallest major industries in terms of employment, with just over 300,000 workers currently, which means the numbers are more volatile, but agriculture easily accounts for the greatest number of deaths. In 2010-11 there were 60 recorded fatalities in agriculture, compared to 38 in construction. The most common cause of compensated deaths in agriculture (a potentially misleading statistic because compensated fatalities only apply to employees, who are just over half the workforce on farms) are vehicle accidents or being hit by vehicles or other moving objects.

How much have government policies contributed to this significant fall in workplace fatalities? Bill Shorten has emphasised workplace safety since he became Workplace Relations Minister. Anthony Albanese has made road transport safety a priority as Infrastructure Minister, although the Safe Rates Tribunal has only started work this year; the main changes in road transport so far have been a significant expansion in the number of rest areas. The downgrading and then abolition of the Australian Building and Construction Commission, the primary task of which was harassment of unionists in the construction industry, is also likely to see a greater focus on safety; under the former Howard government, workplaces fatalities in the construction industry spiked when the Building Industry Taskforce, the precursor to the ABCC, was established in 2002.

One way or another, Australian workplaces, on the most recent data, are significantly safer than six years ago, except in agriculture, which remains a stain on our workplace safety record.

Tony Abbott and the Mainstream media never let the facts ruin a story.

No mention of reduced economic activity and reduced employment growth as factors in the story either though….

Scott: the data is per worker not per Australian, so employment levels are irrelevant.

I am no fan of Abbott or the LNP. But just focusing on the story, this article looks at the ‘big picture’ not the full picture regards this specific issue.

Did Garrett’s office not email Rudd’s office repeatedly saying there were issues with the program?

Not arguing Rudd or his staff are at fault, but this article doesn’t seem to consider the specifics of the issue.

Facts and figures wont stop the coalition using tragic deaths for political gain. It’s funny how Abbott et al wish to remove regulation and red tape for business yet all that regulation came about due to shonky operators. What do they expect will happen when regulation is relaxed?