Kevin Rudd has a strong lead over Tony Abbott on personal attributes but it's not enough to overcome the Coalition's polling lead.

Labor’s primary vote under Kevin Rudd remains at 38%, according to new polling from Essential Report, but unlike Julia Gillard he has a significant lead over Tony Abbott on almost all personal attributes in the eyes of voters.

With the Coalition still on 46% and the Greens dropping a point to 8%, the two-party preferred result on voting intention remains at 52%-48% — the same outcome as after the leadership switch to Kevin Rudd the week before last.

Rudd has a big lead on personal attributes over his predecessor: for example, 77% regard him as intelligent versus 69% for Gillard; 39% believe he is out of touch with ordinary Australians compared to 57% for Gillard; 58% see him as a capable leader (44% Gillard); 57% say he understands the problems facing Australia (42% Gillard); 42% say he is trusworthy (30% for Gillard). He thus has big leads on Abbott across most attributes … 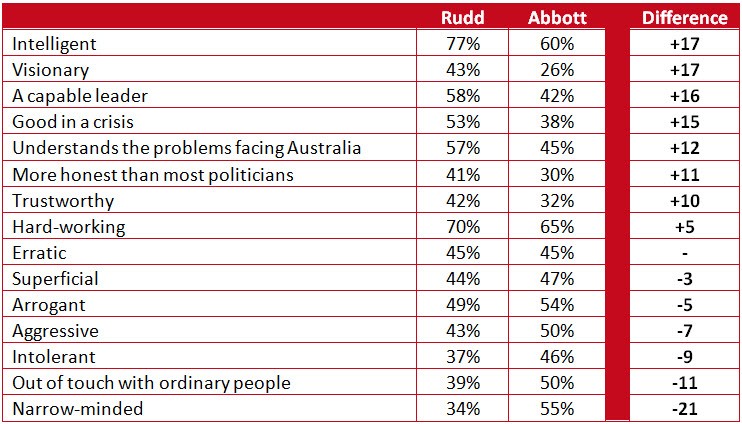 And almost 40% of voters want the election held on the same date as promised by Gillard; 27% want it earlier and only 16% want it later.

OK, So Abbott is sis widely seen by voters as completely untrustworthy and useless compared to Rudd.

But they’re still going to make him prime minister at the next election.

Any insights? Any analysis of why this might be? Hulllooooo??

An Australian psychic by the name of Elizabeth Jensen reported 15 months ago that Rudd will come back into power and will take Labor party into another election win—i recall Laughing at that prediction—I think Crikey should consult that psychic—more reliable than the fickle public—anyway the psychic lives in Adelaide—if her predictions are fulfilled I am heading there to have my past, present and future analysed! If anyone is interested in joining me—just give me a hola lol

Really, has the choice of the two prospective PMs put forward by the major parties ever been so low?
I tend to think that it’s a sad reflection of the reporting standards of much of the mainstream media.

David – it’s even worse than that. We were told a couple of weeks ago that the voters liked Labor’s policies better than they liked Julia Gillard. So they like Labor’s policies, and they prefer Rudd to Abbott.
And yet …

So the logic (if that’s not too strong a word for it) of this poll, is that people can see past the leader. This, however, seems to be a skill they’ve acquired in the last fortnight.

To paraphrase Brecht, “it’s time to abolish the Press Gallery and..errr ..leave it empty” which goes treble for pollstering.