With God on their side: when religion and politics collide

Labor MP Ed Husic was criticised for being sworn in on a Koran -- but the influence of Christianity on Parliament is far greater than Islam. Crikey asks whatever happened to the separation of church and state. “Our Father, which art in Heaven, Hallowed be Thy name. Thy kingdom come. Thy will be done in earth, as it is in Heaven …”

The Christian Lord’s Prayer is recited to both houses of federal Parliament at the start of every sitting day. MPs rise in their places; some join in with gusto, some mumble along with characteristic Anglican reserve, others say nothing. People watching from the public galleries never quite know whether to stand or sit.

Labor MP Ed Husic was criticised by some this week for being sworn into his frontbench role on a Koran. But for those who would like to see a more effective separation of church and state in Australia, the most pressing issue is not Islam.

Religion, particularly Christianity, permeates federal Parliament. The Lord’s Prayer is recited daily; “the blessing of Almighty God” is sought in the first sentence of the constitution; there is a Christian church service to mark the start of each sitting year; MPs are sworn in on religious texts as they recite the official oath “so help me God” (some take a non-religious affirmation instead).

There are influential evangelical parliamentary prayer breakfasts for MPs and weekly Christian fellowship meetings at which alliances are forged (Prime Minister Kevin Rudd used to be a keen attendee). There’s a prayer and meditation room in Parliament House, notorious for amorous trysts. There have been unofficial parliamentary chaplains who have prayed with MPs to help them decide which way to vote on legislation.

All of which may surprise some of the six million Australians who have no religion, or worship a non-Christian God.

In the wake of this week’s short-lived focus on religion and politics sparked by Husic’s Koran moment, president of the Atheist Foundation of Australia Michael Boyd is calling for a more robust separation of church and state.

“I think it’s critical to a civil society,” Boyd told Crikey. “It is incredibly important when you’ve got a society where we have multi versions of religion. It’s extremely important that church and state are completely separated.”

But Boyd is adamant the Lord’s Prayer should be banished from Parliament. Incidentally, the Anglican version of the prayer is read — despite the fact that just 17% of Australians follow the faith. There are more Catholics.

“It’s a bit of an insult,” he said. ” I think it’s quite disrespectful of quite a substantial number of members of the electorate that the Christian prayer is chosen as the one that Parliament opens with … it illustrates how out-of-touch parliamentarians are.”

The Lord’s Prayer is preceded by this prayer, especially written for Parliament:

“Almighty God, we humbly beseech Thee to vouchsafe Thy special blessing upon this Parliament, and that Thou wouldst be pleased to direct and prosper the work of Thy servants to the advancement of Thy glory, and to the true welfare of the people of Australia.”

Then there’s the constitution. Boyd describes as unfortunate and inappropriate this first clause in the preamble (although he notes it would be very difficult to change):

“WHEREAS the people of New South Wales, Victoria, South Australia, Queensland, and Tasmania, humbly relying on the blessing of Almighty God, have agreed to unite in one indissoluble Federal Commonwealth …”

Maddox, an author on religion and politics at Macquarie University, says the religious trappings of Parliament are a concern. “The more that we set our institutions up to look as if they are predominantly about just those of us who are Christian, the harder it is to have a Parliament that is truly representative of everybody,” she said. Maddox says the constitutional God reference was a PR move designed to ensure the federation got up; there was a “huge fight” about it in the 1890s, and it was deliberately written to not specify which God was involved.

So why is it that our pollies pay homage to an Anglican God each day, in a country which has no official religion and is supposed to separate church and state?

The church/state separation is a slippery principle and experts differ on what it means. It’s enshrined in the constitution, section 116:

Maddox says this amounts to a separation of church and state “in some respects”, although the High Court has tended to interpret it to mean less here than it did in the US (read the first amendment here).

Constitutional law expert George Williams says the principle does apply here, but “the separation itself is a relatively weak one in Australia. This isn’t an on-off switch, it’s a spectrum.” It only applies to Commonwealth laws — so the reading of a prayer in Parliament is not affected. Williams says the constitution makes it clear Australia’s federation is based on pluralism, so the reference to “Almighty God” is an inconsistency.

According to Australian Bureau of Statistics data, we are becoming less religious, and those who are religious are less likely to be Christian. Christians have plummeted from 96% of the population in 1911 to 61% today; 22% now say they have no religion. There are just over 1.5 million Australians who adhere to a non-Christian religion; Buddhists make up the largest group.

Supporters of a more secular political process, of course, point more to the influence of religions on policy (euthanasia, abortion, gay marriage, etc), and the spending of billions of taxpayer dollars on religious schools, hospitals, aged-care homes, job search providers and school chaplains.

And it remains to be seen if born-again PM Kevin Rudd will once more hold press conferences outside his church on a Sunday. 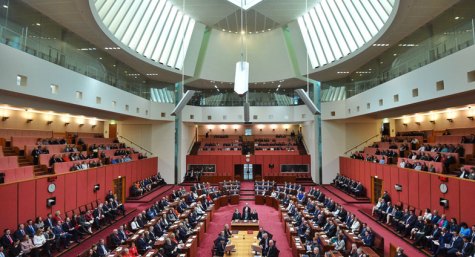 Gillard’s not our first atheist

The ACT Assembly for the best part of two decades has dealt with the issue of prayers in an inclusive manner. Standing Order 30 provides for the Speaker to ask MLAs to “pray or reflect on our responsibilities to the people of the ACT”. It is step in the right direction. However, the issues of politics and religion still permeate this small parliament as illustrated when (Catholic) Speaker Vicki Dunne attempted to run a religious service as part of the opening of the current Assembly.

Good to know that there’s something to keep Boyd busy – even more harmless than the Henry Georgers and Proportional Representation enthusiasts (anyone for the political beauties of Israel’s Knesset?). As, if you can’t read Hebrew and Greek (and I’m told the Greek was pretty low grade) there is nothing better than the KJV and Cranmer’s Book of Common Prayer (no later than the 1662 version) it is up to us all to help preserve these superb literary foundational elements for Anglophone culture (ours whether we like it or not).

All of us, atheist (cultural) Catholics, (cultural) Jews, (cultural) Anglicans or whatever should know that Chesterton had a point and that there is an awful human tendency to believe which is bound to be dangerous when it takes off after some novelty (Jim Jones and Guyana), the Waco Whackos, Jehovah’s Witnesses, varieties of Marxist-Leninist-Trotskyite-Maoist murderous utopians, and now our global warmists amongst others. [Yes, yes, the earth’s atmosphere and perhaps oceans have been warming for about 250 years since the peak of the last Little Ice Age but we don’t know why so we can’t possibly say that the contribution of CO2 is so big and so dangerous that we ought to destroy landscapes with windfarms and spend money on unnecessarily expensive electricity instead of e.g. the money for higher education which Gillard and Swan have taken from universities so they can pretend to fund Gonski.]

They might as well start by saying grace?
“For what you about to receive, to the Lord be truly thankful!”

Or a quote from Dylan? “And my best friend Murdoch don’t even know what it is I got…”?

While we’re at it we should rescind the law prohibiting trading on christian religious holidays: easter, xmas and Anzac day.