Greens throwing it all at Grayndler? It seems the race is on for Sydney’s federal seat of Grayndler, held by acting PM Anthony Albanese (who thought we’d ever say that?). The Greens are in with a shot in the inner-south seat — or they think they are …

“Apparently Greens Grayndler candidate Hall Greenland thinks only 3800 ALP voters from 2010 need to be persuaded to switch his way to unseat Albo later this year. Is that the reason why the immense resources of one erstwhile State Greens MP Sylvia Hale and also the substantial (publicly-funded) electoral resources of Greens Senator Lee Rhiannon are being pooled to inflict a flurry of online and snail-mail traffic on denizens of that ever-improving-SES-demographic Sydney electorate? Grayndlerians are starting to report feeling blinded by the concentrated focusing of green light, and fear that they may be copping more and more as polling day gets closer.”

We’ve put that to Rhiannon’s office and will let you know what she says. The Greens got more votes than the Libs last time around, but it might be tough to unseat King Albo …

Who’s who at gossip king’s drinks … The Australian Financial Review’s resident shit-stirrer and Rear Window editor Joe Aston celebrated his 30th birthday at Sydney’s Ivy Bar on Saturday night. Plenty of luminaries showed up but it’s unclear what the greater appeal was: a night with gossip-hack Aston or the free booze. Ivy boss Justin Hemmes picked up the tab from 8.30 to 11pm. Our spies tell us Coalition MPs Malcolm Turnbull, Steve Ciobo and Paul Fletcher were there; so was Business Council of Australia President Tony Shepherd and Seven Network commercial director Bruce McWilliam. Jess Rudd, still on a high from her dad’s return to the Lodge, swung by, as did spin doctors Sue Cato and John Connolly. The media contingent included former News Limited CEO John Hartigan, Cleo editor Sharri Markson, Australian Women’s Weekly editor Helen McCabe, The Australian editor Clive Mathieson and Fairfax director of business media Brett Clegg. Despite Ivy being named the most violent venue in NSW earlier this year, we hear there were no fisticuffs on the night. Bring back the biff!

… as Crikey pips Aston to the story. Memo to News Limited’s spin doctor Stephen Browning: next time you send an email to The Australian’s managing editor Helen Trinca about Crikey, best not to copy in everyone on the paper’s editorial staff. Browning’s missive came after Crikey’s Matthew Knott got his hands on (and later published) an email from The Australian editor-in-chief Chris Mitchell announcing the paper is shedding 10 more editorial jobs.

“FYI, Crikey has the below and will be writing a piece. Someone actually tipped Matthew Knott off before the announcement went out.

Joe Aston has heard, but doesn’t have the note.

The e-snafu gave staffers at The Oz a bit of light relief in a glum week.

Candidate’s courtly past. A certain candidate for the federal election has a number of matters against his or her name in court. We can’t tell you much more at this stage. A party should always do its due diligence …

Back away from the journalism course. We hear the Herald Sun has frozen its traineeship program. Lean times for journalism grads.

Man of the people. Who says Malcolm Turnbull was born with a silver spoon in his mouth and doesn’t empathise with ordinary folk? 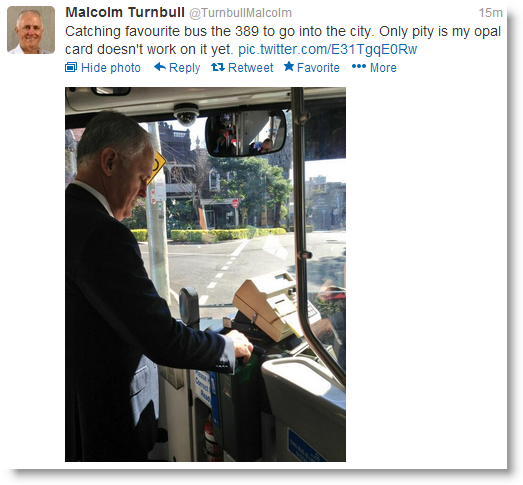 “Back away from the journalism course. We hear the Herald Sun has frozen its traineeship program. Lean times for journalism grads.”

Can’t see the problem. Those looking at the Horrid Sun can join the Young Liberals and get the same ‘training’.

Interesting to see that Malcolm Turnbull MP doesn’t blame the failure of his Opal card on the current Minister for Transport.

Might that have something to do with her being a member of the NSW Liberal/National Coalition government?