Welcome to the post-boom economy … hope you like it

Yesterday was a remarkable day in the Australian economy. Not for any one reason; for multiple reasons, in fact. In a day of rich data and news flow, everything pointed in the same unfamiliar direction: towards an economic future that has been long discussed and thought of as distant but has arrived early. It is post-mining boom. It is post-housing boom. It is post-consumer boom. It is the export volume boom, and you better understand what it means if you wish to maintain your standard of living.

A quick look back helps make the point. For the past decade and a half Australia’s economy has been driven by two successive booms. The first was the housing and consumption craze across the millennium and up to 2003. From there, growth was taken forward by China and the resources boom, first in commodity prices then later in investment in new mines. But all three of those are out of steam. Yesterday’s news flow made the point very clearly.

Regarding house prices, Morgan Stanley cut its forecasts from an already subdued 4-5% to 3-4%, barely covering inflation: 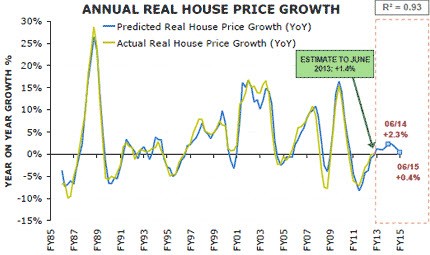 As well, Captain Glenn Stevens of the RBA praised households for making the shift to lower debt growth and underlined the benefits to the economy of higher savings:

“It could also be said that we were fortunate that the sub-prime crisis in the US emerged from early 2007, and not later … It could be added that we were lucky that the change in behaviour of households — slower borrowing, more saving — came when it did. For a start, had households continued as they were, they would have become more financially extended, and it is obvious now that that would have been risky. Moreover, this changed behaviour of households has helped us absorb the resources investment boom.”

That lower willingness to risk high debt levels has had another consequence: lower consumption. Yesterday we got another taste in a long line of samples of the new normal for retail. May sales were flat, and aggregated June quarter sales actually fell half a percentage point:

Both housing and consumption are barely keeping up with inflation and subdued income growth. Household-led growth is so yesterday!

But what of mining investment, our other former engine of growth? Well, the Australian Bureau of Statistics (ABS) also released yesterday its March quarter accounts for national engineering construction, which is often used as a proxy for the mining construction boom’s contribution to growth. Lo and behold, it fell 3%, the first of many such withdrawals from growth in the years ahead as all of those erstwhile mining plans are either completed or cancelled as China slows: 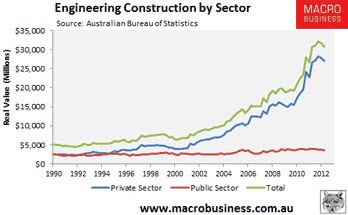 Booming mining projects are so yesterday …

So, if our two former engines of growth have returned to idle, what can we rely upon now? As many have argued for the future, all of those big mining plans have a second round benefit as they begin to produce, raising our export volumes, which contributes directly to GDP. Yesterday it so happens that the ABS also released trade data for May and the balance showed exactly what I’m talking about with record exports to China and a solid trade surplus: 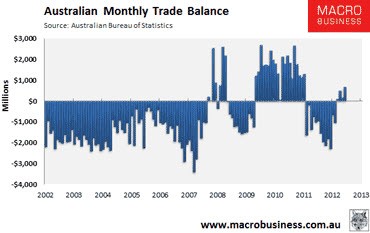 This is the offset to fading resources investment growth. It was the same in the first quarter of this year (our last GDP figure to hand), with net exports contributing a huge slice of our 0.6% growth. If anything, net exports are shaping up as an even more important contributor to June quarter growth, which may ease further still.

And that offers you a clue to the first lesson you should learn about your new economy. Over the past year, you will no doubt have noticed that 2.4% growth is not enough to hold unemployment stable. With net exports leading growth, it is quite possible for the Australian economy to grow happily through the next three years and have unemployment climb throughout. The simple fact is that net export-focused  growth is much less employment intensive than either housing/consumption or mining investment.

That has important implications for your career and investment choices. You’ll be competing with more Australians for every potential job, and I suggest you remain quite cautious on investments in which returns rely upon consumer exuberance and debt accumulation. That applies equally to property and stocks.

It’s not all gloom, however. There are two upsides for the early movers to consider. In this new growth model, where unemployment is an ever-present risk, where debt remains revolting to many and in which growth is driven by demand from other economies not our own, you can look forward to two enduring truths.

Interest rates will remain much lower for much longer than most think (not that that will benefit the old “interest rate-sensitive sectors”, but it helps those paying down debt and frees up disposable income in place of leverage and asset price growth). Secondly, the Australian dollar will continue to fall much further (and perhaps faster) than most expect. If you’re not planning your financial choices around these two realities, then you’re not in the main game.

Welcome to your new economy. I hope you like it.

*This article was originally published at MacroBusiness

Hurrah, bring on more recognition of reality! For extra points put Oz’s flatlining in context of SHRINKING economies across rest of OECD, and for gold star consider significance of declining net energy from ‘unconventional’ oil, browner coal, and climate-hit agriculture. We’re post-peak, people, get used to it.

We’ll all be doomed said Hanrahan, before the year is out.

Only a moron would think housing prices will grow from here on in. Two decades of economic growth, job security, strong wage rises and (reckless) tax cuts from Howard have led house prices to where they are. All four of those conditions are now reversed.