Rudd dream team revealed. Kevin Rudd unveiled his backroom team to the press gallery over drinks last night. The surprise pick was Treasury Deputy Secretary Jim Murphy, who’ll be Rudd’s chief of staff but primarily act, Rudd repeatedly emphasised, in a policy capacity. It’s hard to see Murphy being a long-term appointment for such an intensely political role, but Rudd’s immediate challenge is as much about policy as about politics (for which Bruce Hawker will advise him), and a Treasury hand at the top of the chain will provide some reassurance that any urge to spend their way to victory is restrained.

Joe Hockey tweeted that the Murphy appointment “is wrong on so many fronts” but declined repeated requests from all and sundry to name any of them. Corri McKenzie from Jenny Macklin’s office will be the (altogether more political) deputy CoS, and Rudd stalwart Fiona Sugden returns to be communications manager.

The arrival that set tongues wagging, however, was that of former Australian scribe Matthew Franklin, adorned with a visitor’s pass. Franklin hasn’t been seen in Parliament since he took a redundancy from News Limited but, it was revealed, has joined Rudd’s media team. This is likely to cause considerable cognitive dissonance on Twitter, where Franklin used to be an enthusiastic defender of The Oz’s editorial line and readily tangled with critics attacking his articles. “Just let the professionals do their job,” Franklin once scolded Crikey’s own Possum Comitatus when the latter dared to suggest The Oz was misreporting the schools component of the Rudd stimulus program. A Ruddite replacement for John McTernan, who commendably and frequently used Twitter to let everyone know his views, thus looks assured.

Pollies’ dodgy campaign material (omnibus tip). Tips hugely enjoyed a promotional video by the ALP candidate for the federal Victorian seat of Mallee, Lydia Senior. We wanted to share the amateurish, wacky and overblown effort with you, but sadly Senior seems to have got cold feet, and it’s been taken down. If you see any amusing or terrible campaign material from candidates, be sure to alert Tips. We’ve learnt our lesson from Senior and will find a way to quickly save the best on file …

It’s not just Senior putting out questionable pre-election guff. Remember Tony Abbott saying this to Parliament upon the recent recycling of Kevin Rudd as leader: “Politics is a tough business, but sometimes it is far more brutal than it needs to be”? Abbott also suggested an elevation of standards in politics. So we wonder, Tony, why your mob is putting out this kind of thing? Yes, it’s authorised by the Liberal Party. 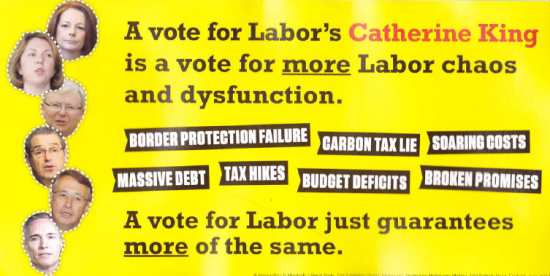 Our recipient, from Victoria, said: “Received a Liberal Party flyer yesterday urging me not to vote Liberal, nor to resist voting Labor, but to vote against my local member Catherine King. Is this a shift from politics to personal?” Another tipster who also sent in the flyer said “I still have no idea who the Liberal candidate may be, but I guess that’s not an issue”.

Over to Foreign Minister Bob Carr, who is being a little creative with the truth on the Liberals and the GST: 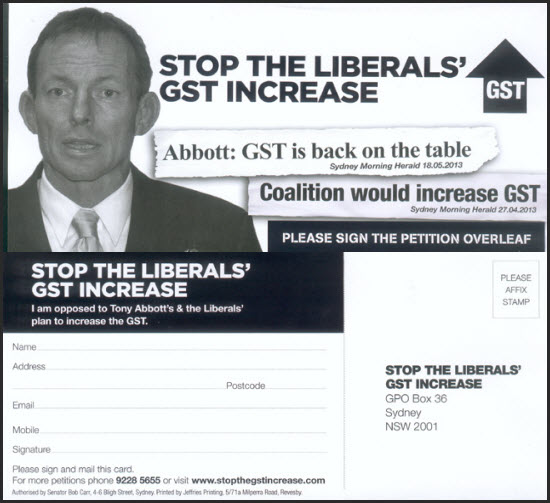 And here’s an email doing the rounds — the person who CC’d in Crikey said this: “It was forwarded to me by one of my friends who is a rabid right-wing supporter.” 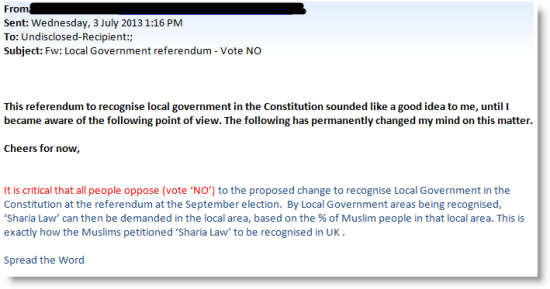 Benson boo-boo. The Rudd force’s “drop king” Simon Benson at The Daily Telegraph had heaps of EXCLUSIVES plastered over Sydney’s premier little paper this morning. But on page five Benson came unstuck when he reckoned Treasurer Chris Bowen was the member for Barton. That’d be retiring former attorney-general Robert McClelland. To muddy the waters further the ALP candidate in Barton is Steve McMahon. And McMahon is Bowen’s seat. Confusing, eh?

Party goss. The good folk at Media Watch will be letting their hair down to farewell hostie Holmes, who has delivered his last ep.

If there’s any party gossip, bastions of media accuracy and ethics can email Tips (and you can stay anonymous). Staff have already raised an on-set toast to Holmes (thanks @meniosc for the pic) — you’d think after five years in the job, Holmes would merit real glasses and not plastic ones? New-old host Paul Barry takes on the gig from next week. 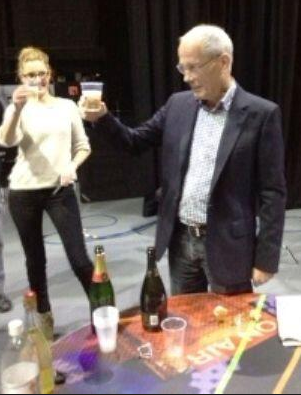