Rudd takes on reform: NSW intervention 40 years in the making

Kevin Rudd has intervened into the rotten branches of the NSW Labor Party, promising to spread reform nation-wide. He's in a better position to do it than Julia Gillard. 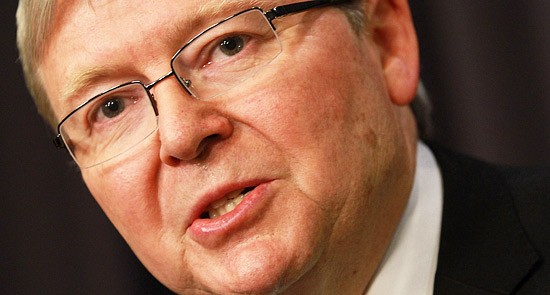 The stunning national executive takeover of the New South Wales branch of the Labor Party, announced this morning, is over 40 years in the making.

In an effort to put some clear air between the new Rudd government and the politically toxic NSW ALP, Prime Minister Kevin Rudd and Deputy Prime Minister Anthony Albanese announced federal intervention in the branch, ordering new rules to allow for the removal of corrupt members and other measures to shore up confidence in an edifice that has become a byword for corruption. The reforms demanded by Rudd include:

The PM left the door open to demand further reforms and flagged that broader reform of the ALP would be addressed in the future.

It was February 1967 when Gough Whitlam assumed the leadership of federal Labor, with Lance Barnard elected deputy. The duo quickly got about reforming the sclerotic structures of the NSW and Victorian branches, culminating in the crushing of Bill Hartley and the Victorian Left in 1970. But in comparison, the NSW reforms were lukewarm at best.

The official communiqué sent by NSW general secretary Sam Dastyari to the 40-strong NSW administrative committee — obtained by Crikey — details the task ahead of the state branch as Kevin Rudd moves to tick off Whitlam’s unfinished business.

Dastyari says there will be a “zero tolerance approach to corruption”, allowing the party to immediately expel those found guilty of corrupt conduct. And 50% of the Administrative Committee will be represented by rank-and-file Labor members.

In the email missive sent at 6.24am today, the MP-in-waiting slams The Daily Telegraph for inferring in its front-page report this morning that the Administrative Committee would be “sacked or stripped” of its powers. In fact, the national executive will “simply be adopting the package on our behalf”.

At a double-headed press conference, Albo noted that the last time intervention had been pursued in the NSW branch was 40 years ago, in conjunction with Whitlam’s total takeover in Victoria. But while a condition of the crackdown was parsimonious reform in NSW, north of the Murray change was glacial.

The Victorian putsch was famously justified by Whitlam’s mantra that “only the impotent are pure”. But NSW Labor president John Ducker could see the intervention coming and at a meeting of the federal executive in 1970 seconded a motion calling for an investigation into his own branch, what cabinet minister Clyde Cameron described as “submitting to r-ape and enjoying it”.

NSW changes at that point included proportional representation to give the Left a foothold and the introduction of the review committee abolished this morning, which had become a poisonous vehicle for far-reaching faction control. Albanese name-checked the creation of the tribunal, belling the cat with these lines:

“The situation whereby you could know the outcome of a meeting of the ALP credentials committee, or the ALP disputes committee, or the ALP review tribunal before the meeting was held, has to end. These structural reforms will end that and hence end the power of those who are in a position to know the outcomes before the meetings are held. That’s why meetings are held.

“This is the most significant reform into the NSW branch in 40 years. Forty years ago when the reform established the review tribunal of the NSW branch, that was meant to do the job. Unfortunately, over a period of time, what happened was that the culture that had dominated the lower echelons of the branch went further up.”

One question left hanging this morning is how exactly the current administrative committee would comprise 50% rank-and-file members. One solution might be if admin was fingered by the rank-and-file half of state conference. But that might also founder given, technically, someone like Opposition Leader John Robertson might conceivably be elected as a champion of the grassroots.

Of course, until now the NSW Right have rarely been side of democratic reform. At the 2011 national conference just 42% of the reforms recommended by the Bracks-Carr-Faulkner review were fully adopted. Most were taken up only in part or rejected outright, with the Right ramming through an omnibus of resolutions most delegates didn’t have time to read, let alone consider.

For Rudd, differentiating himself from the NSW ALP branch is a critical requirement given the deep damage the NSW Independent Commission Against Corruption hearings into Eddie Obeid and Ian Macdonald have inflicted on the Labor brand. Rudd is much better placed to address the matter than ex-PM Julia Gillard, who was strongly dependent on union support and avoided the issue of internal reform as too dangerous to her leadership.

Subsequent to his removal as prime minister in 2010, Rudd embraced party reform as a vehicle for personal vindication and engineered a return to the prime ministership in the face of union support for Gillard, meaning he is unrestrained in pursuing further party reform that might undermine the structural role of unions with Labor.

In intervening with the support of the newly elevated Albanese, from the NSW Left, Dastyari of the Right (a late reform convert) and Robertson, Rudd can stare down any internal opposition or criticism.

Will Labor’s reform momentum now grind to a halt?

So – how long until the pre-selection plank of the Bracks Carr-Faulker reforms are implemented?

Breathtakingly cynical as always, but by god Rudd is a PR genius.

And what about the developers already dominating our branches? Sitting there in the dark, arms crossed, interested only in Council and local matters. Filth. How can he get rid of them? How do you define a ‘property developer’? I have an investment property… am I one?

I believe Crikey may have seen a copy of the Prime Ministers letter to Sam Dastyari. It had no time line just the date 4 July 2013. It appears looking at the coat of arms at the top of five pages. Kevin Heiner Rudd had no problem converting our Federal Government resources to Labor party political business. A pretty poor showing from a Prime Minister making a big splash about wanting to sort out all sorts of future corruption while putting the other stuff behind them. I had a councilor done for using councils email as a campaign resource. With all the taxpayer funded staff and advisers waiting on the Prime Minister hand and foot. How could something like that happen, unless it is so entrenched? They should know better. Edward James