Egyptian protesters have emerged triumphant, kicking president Mohamed Morsi to the kerb. But the nation remains on the brink of chaos, reports freelance writer Vickie Smiles from Alexandria. 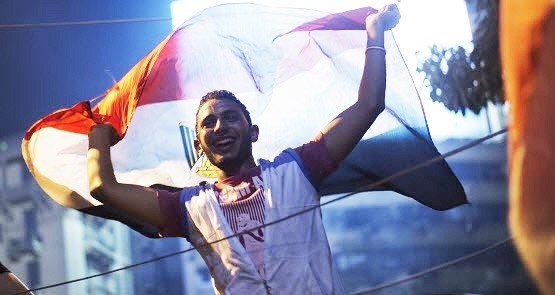 Wild cheers greeted the news at 9pm last night that Egypt’s Islamist president Mohamed Morsi had been stripped of his office and powers by the military in what many described as a coup. People went berserk in Cairo, letting off fireworks, and in Alexandria the jubilant populace broke new ground in noise creation with horns, drums, whistles and anything else they could find to further deafen the population.

General Abdel Fattah al-Sisi addressed the nation last night with the crowd-stopping news of a transitional government and new presidential and parliamentary elections. The Egyptian constitution has been suspended, and this morning the head of Egypt’s Supreme Constitutional Court, Adli Mansour, will be sworn in as interim head of state.

Standing behind a podium, al-Sisi was flanked by many, including the Coptic Pope, Tawadros, the Sheikh of Al-Azhar, Mohamed ElBaradei, and members of the Tamarud (Rebel) movement, which proved crucial in setting the agenda for the push against Morsi. Significantly, the Nour Party, Egypt’s second-largest Islamist organisation, was also there, having declared its support for the political transition.

Al-Sisi kept the nation waiting for more than four-and-a-half hours after the expiry of his 48-hour deadline for political forces to outline a plan or “road map” to fulfil the demands of millions of protesters calling for Morsi’s resignation. Much of the delay had been spent negotiating with political, religious and youth figures eager to endorse the transition process. The military also needed extra time to deploy protective forces throughout Cairo, first in the suburb of Nasr City near the Raba’a el Adaweya Mosque gathering of pro-Morsi demonstrators.

Armed forces and vehicles moved closer to Tahrir Square and other locations in Cairo as well, including the boulevard beside the Presidential Palace, occupied for the past four days by anti-Morsi protestors.
Tensions mounted as the 4.30pm deadline passed, and as the waiting turned into hours, fears of a military coup intensified in both camps.

However, al-Sisi insisted the army was not seeking to rule the country but to reset the national course. Attempts to have a national reconciliation that included the presidency had failed. It was also revealed shortly afterwards that Morsi had been moved to an undisclosed location, indicating that earlier rumours that he was under house arrest were correct. Travel bans are also in force for Muslim Brotherhood leaders, including Khairat el-Shater, the movement’s first choice for presidential candidate last year, who was disqualified shortly before the vote began.

Morsi had made a last-minute offer, via Facebook, to form a national coalition government and allow a consensus-chosen prime minister, but it was too little, too late. Defiant until the end, he said: “Those who believe that Egypt can go back and destroy the legitimacy are mistaken.”

The president had already given a 45-minute speech on state television around midnight Tuesday, saying he was willing to sacrifice his life to defend “legitimacy” and ballot box endorsement of his presidency.

The military wanted dialogue, but Morsi wanted the presidency more, and his defiance was followed by further violence and bloodshed, which pushed the death toll over 30 by Wednesday morning. Even the Freedom and Justice Party (FJP), the political wing of the Muslim Brotherhood, shunned an offer to meet with the military, thus closing all doors for Morsi and the Brotherhood to be part of the solution. 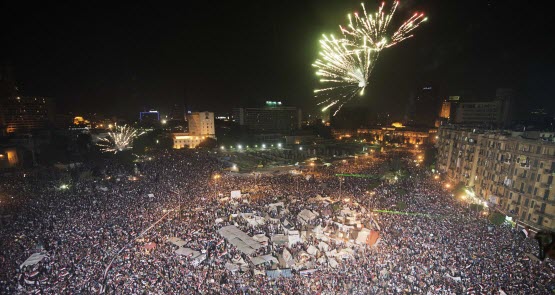 Despite the tension, people flooded the streets during the course of the day, with millions appearing in Cairo’s Tahrir Square, on the wide boulevard leading to the Presidential Palace and on bridges across the Nile. There was little space unfilled, and all the while protestors held their hope and humour.

Protester and commentator Mohamed Khalil, who said Tuesday that the June 30 revolution meant the end of the Muslim Brotherhood project, was ecstatic at the outcome: “We are now on the right path. The military have listened to the youth of Egypt.”

As of last night people were confident that the June 30 intervention would be totally different from the military’s role after the January 25, 2011, revolution, when SCAF (the Supreme Council of Armed Forces) ruled with an iron fist and failed to honour its promises.

A key difference is the much-hated Ministry of Interior, which fought against protesters during the 2011 revolution and has yet to be held accountable, switched sides and joined the move against Morsi. “It is in this critical time that we’d like to assure you our determination, as police officers, to stand with you and protect you,” said the ministry in a statement.

And when members of the ministry showed up in Tahrir Square yesterday with free bottles of water, they were greeted with grace and smiles.

There were always two big problems with the Arab Spring that seem to have been overlooked by everybody:
1. The people who get elected may not be people we (i.e. ‘The West’) like.
2. Democracy 101, you have to have some sort of general consensus about how the country should be run, or democracy isn’t possible or workable. Otherwise the 49% who aren’t in power become ungovernable, and the 51% in power will try to tyrannise them.
So now is it the 49%’s turn to tyrannise the 51%, or what? No good can come of this. It takes decades or maybe centuries to build the foundations of democracy, even the pretty broken type we have. The middle east isn’t even close.

Makes you glad to be an Australian. We might have a 49/51 vote but at the end of the day, despite some grumbles and moans, we get back to out mostly peaceful lives.

Can a majority vote to abolish democracy be democratic?
Can a theocracy be a democracy?
If the answer to each is “No”, and I claim it is, then the imposition of a theocratic constitution is not democratic.

What is incomprehensible is that the opposition focused on removing Morsi rather than removing the theocratic elements in the constitution. Removal of an elected president by a bunch of brasshats leaves a widespread perception of injustice which is much harder to heal than removal of patent injustice in the legal structure. It is hard to escape the suspicion that the impetus for the “remove Morsi” demand was influence of US geostrategic ambitions, like “remove Saddam”, “remove Assad”, “remove Gaddafi”. A massive co-ordinated uprising had to have been seeded by somebody.

Smiles’ take on the crowd numbers are a joke. She says:

‘Despite the tension, people flooded the streets during the course of the day, with millions appearing in Cairo’s Tahrir Square, on the wide boulevard leading to the Presidential Palace and on bridges across the Nile’.

Millions?? Huh?? How did she add them up?

If her figures are so far out, what else is in her report.

As in Syria, and in Libya, the western media’s distortion of the on the ground events in Egypt must be viewed skeptically.

Obama has already given the officer corp the drill – stability is better than democracy. Just like every other Prez since the Monroe doctrine – who cares if (..insert tyrant’s name..) is a murderous sonofabitch so long as he follows orders.