Tomorrow's summit between Kevin Rudd and Indonesian President SBY is getting good press here -- but the anticipation in Indonesia is more subdued. Jakarta-based Stuart Ranfurlie explains why.

While the leaders’ summit in Indonesia tomorrow between Prime Minister Kevin Rudd and President Susilo Bambang Yudhoyono is garnering plenty of attention in the Australian media, it’s getting far less attention in Indonesia. The reasons why are manifold.

What many Australians don’t realise is that Indonesia’s foreign policy looks north to south-east Asia, rather than south to Australia. One of the country’s major foreign policy objectives of recent years has been strengthening the influence of the Association of Southeast Asian Nations, the 10-member bloc that models itself on the European Union (member countries fly the retro-design ASEAN flag alongside their national flags outside their embassies).

With a combined population of nearly half a billion people, ASEAN has muscle and gives countries in the region real influence; the introduction of the ASEAN Economic Community from 2016 creates significant economic opportunities. Deepening ties with Australia, by comparison, brings comparatively less benefit.

Further detracting from the significance of the Rudd-Yudhoyono meeting from an Indonesian perspective is the major item on the agenda: people smuggling. Indonesia has long made clear that it sees this as Australia’s problem, not its own, given that ramshackle apartments on Java were clearly never the intended final destination of the Afghans, Tamils and Iranians who occupy them.

Indonesia is too engaged in dealing with the myriad problems that afflict its own population to be concerned about the poverty and human rights abuses to which asylum seekers are subjected, and the country sees little benefit in better policing the porous borders that are inevitable in a poor, archipelago nation.

For Rudd — or indeed, a future prime minister Tony Abbott — to get Indonesia energised on this issue requires finding some leverage, and there are no clear signs of what that leverage might be. Military or civilian aid may be part of the answer.

But Rudd did get some support among Indonesian experts for his provocative statements last week that Abbott’s turn-back-the-boats policy could lead to diplomatic conflict with Indonesia.

“It would put Indonesia in a difficult position because providing shelter for asylum seekers requires a lot of money,” Hikmahanto Juwana, an international relations expert at the University of Indonesia, told The Jakarta Globe. “But to not give them a shelter would give Indonesia a bad name in the international community.” 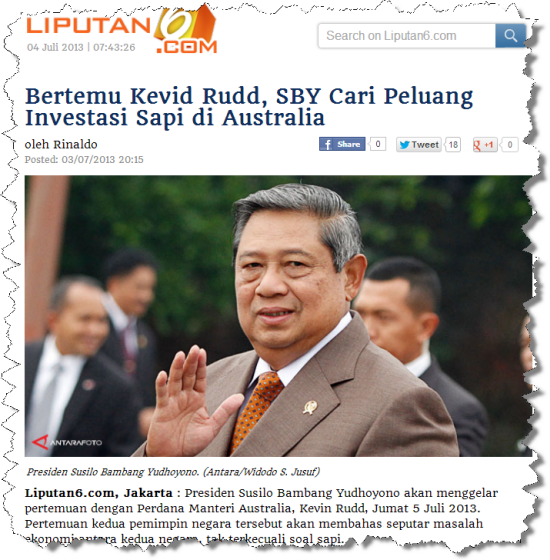 On the people-smuggling issue, respected news magazine and website Tempo points out, in English, that Rudd, rather than Yudhoyono, bears the burden of making the case for Indonesian action. It says in its preview of tomorrow’s summit:

“Jakarta will look forward to hearing Rudd’s clarification on the confusing messages on the issue, from both the government and opposition parties.  In other words, Yudhoyono will most likely be listening to what Rudd has to say and to suggest.”

In its preview, Liputan6 quotes Foreign Minister Marty Natalegawa speaking in some detail about the issue of beef imports, which remains a sore point after the swift action in 2011 to suspend live cattle exports to Indonesia in the wake of the animal treatment scandal. Although the trade has since resumed, and then-trade minister Craig Emerson earlier this year secured an increase in this year’s quota, this issue still stings. Natalegawa said:

“The President always emphasizes that trade talk should involve support so that the investment capacity of the Indonesia livestock, especially cattle, can be improved.”

A story from news website BeritaSatu quotes Yudhoyono’s foreign policy spokesman as saying that the two leaders will discuss a host of bilateral issues, including economic co-operation, investment, and public relations (this last item makes as little sense in Indonesian as it does in English, so what it refers to is unclear). “In addition they will also discuss issues of regional and global concern, such as APEC and G20 co-operation,” he said, referring to bodies of which both countries are members.

One little detail of note is that Yudhoyono has invited Rudd to the luxurious and spacious grounds of his Bogor palace, which is perhaps best compared to America’s Camp David. It’s the place where serious statecraft is done, rather than the more perfunctory grip-and-grin meetings that often happen in the president’s Jakarta abode.

Perhaps to the chagrin of the Prime Minister’s security detail, likely already feeling tetchy after the theft of 250 sticks of dynamite from a truck near Bogor last week, BogorKita news website has pointed out that a sniper and more than 600 members of the police mobile brigade will be used to keep Rudd and Yudhoyono safe.

It is not people smuggling, it is people seeking asylum and who they pay has nothing to do with anything.

Why are the frigging Australian media so obsessively brainwashed with the lies?