Indonesian forest fires have enraged neighbouring Singapore and Malaysia, who have been blanketed in smoke. Jakarta-based researcher on forest governance Tessa Toumbourou asks who's to blame. 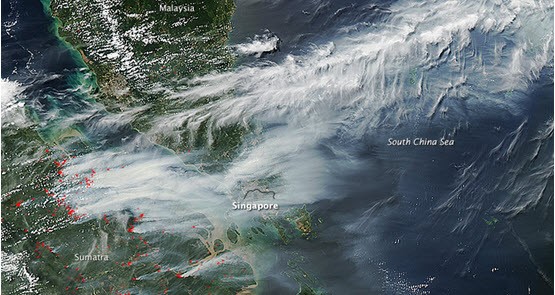 Over the past fortnight, haze from Indonesian forest fires has covered Singapore. The island state’s Pollution Standards Index rose to an all-time high of 401 on June 21 — anything above 300 is considered hazardous to human health. This comes with a recommendation that residents, particularly children, the elderly and others vulnerable to respiratory disease, “avoid unnecessary outdoor activity”. Schools and airports in some Asian countries have been closed. The smoke can be seen in the above satellite image from NASA.

So what caused these damaging fires?

Half the fire alerts in Indonesia’s Riau province, the epicentre of the fire zone, have been found to be on timber and palm oil plantations, according to recent analysis by the World Resources Institute (the WRI has an excellent interactive map showing the origins of the fires). Fires within the concession areas of the companies Sinar Mas and Raja Garuda Mas were reported to account for over 50% of the fire alerts across all land within these concession areas. Indonesian authorities have fingered these two companies.

In all, the fires came from the concession areas of 14 Indonesian companies. The two main culprits, Sinar Mas and Raja Garuda Mas (which includes pulp and paper company APRIL) are both listed in Singapore but are under Indonesian control.

The owner of Raja Garuda Mas group, Sukanto Tanoto, has sheltered in Singapore since 2001, when a bank he owned — Unibank — collapsed with Rp 3.9 trillion (US$429 million) in debt. Tanoto was named by Forbes last year as among Indonesia’s wealthiest people, with assets worth $US2.8 billion.

Most of the large forestry and plantation interests in Riau, including Raja Garuda Mas’ APRIL, Sinar Mas’ Asia Pulp and Paper, Sime Darby Plantations and Kepong Berhad, and Wilmar International, have denied they are the cause of the burning, insisting that they maintain zero-burning policies.

However, research demonstrates that even for companies that do not deliberately use fire to clear land, disturbing the naturally waterlogged condition in peatlands creates extremely dry conditions and hotspots. Peat fires can smoulder underground for long periods of time (weeks or months), releasing large amounts of carbon, and triggering latent forest fires above ground. Satellite imagery indicates that a high prevalence of Sumatra’s fires are on peatland areas.

Last week, Indonesia’s President Susilo Bambang Yudhoyono apologised for the fires to settle diplomatic tensions with Singapore, but refused to assume responsibility for the fires on Twitter. Instead, the central administration pointed the finger at the provincial government for not having taken precautions against the haze. 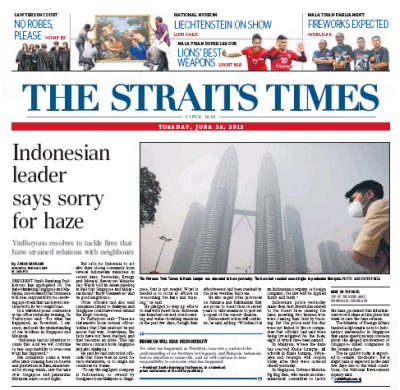 “To be honest, I think Riau was quite slow in anticipating this from the beginning. But there’s no need to play the blame game. Let’s just [work] to overcome the haze and fires immediately,” Yudhoyono said, as reported in the Jakarta Globe.

Analysts have pointed to the links between weak law enforcement and the allegedly corrupt track record of Riau’s governor Rusli Zainal, currently the leading suspect in an illegal logging case. “The haze disaster shows the impact of corruption in the forestry sector,” said Danang Widoyoko, the chairman of independent graft monitor Indonesia Corruption Watch.

In the absence of responsible actors, international NGOs Avaaz and the Environmental Investigation Agency have called on the Round table on Sustainable Palm Oil (RSPO), a body that certifies sustainable palm-oil plantation practices, to intervene. Half of the fires in concession areas are on the land of companies that have been certified as sustainable palm oil producers with the RSPO, including Sinar Mas, PT Jatim Jaya Perkasa, Tabung Haji Plantations, Kuala Lumpur Kepong, and Sime Darby.

The RSPO has stated that it will ask these companies to submit digital maps of their plantations, which will be analysed to confirm the fire locations. Once the fires are located the task is to identify the causes — whether due to negligent conduct or otherwise.

Following his apology, Yudhoyono sent around 3000 Indonesian military and civilian personnel to Riau to help locate and put out forest fires.

Tracing origins of fires in peat systems is no easy task. They cover large underground areas, and fires that begin in peatlands areas do not necessarily emerge in the same location but often spread large distances underground, invisible to the eye, before the fire actually appears. Fires on peatland, especially deep peat, are extremely hard to put out.

Bushfire battler story is more complex than it looks

DNA testing is dragging out the agony for fire victims

That aerial photograph is amazing – at every level.