The polls after Rudd: state-by-state breakdown smiles on Labor

Now that politics has reset itself, it’s worth looking at the polls since the change of PM — the results of which can pretty much be described as consensus … Rudd poll boost, ALP becomes competitive, etc. But there’s something else worth talking about: what’s going on underneath these topline national results. Unless one side […]

Now that politics has reset itself, it’s worth looking at the polls since the change of PM — the results of which can pretty much be described as consensus …

Rudd poll boost, ALP becomes competitive, etc. But there’s something else worth talking about: what’s going on underneath these topline national results.

Unless one side starts running away with the polling, or something weird happens in Queensland like Rudd getting caught wearing a Blues jersey at the Origin decider, the headline two-party preferred results may be a little misleading going into the election — not in terms of them being wrong, but in terms of the seats they would ordinarily deliver to each side. To understand why, we first need to look at what’s happening with federal voting intention at the state level.

Both the Morgan SMS and ReachTEL polls had large sample sizes (5548 combined) and fortuitously we have the state breakdowns for each, allowing us to get a decent handle on the dynamics playing out at the state level. We have an additional poll for Queensland of 980-odd respondents, which is not quite an internal poll but it’s not quite not one either. It says the same things as the Queensland components of ReachTEL and Morgan SMS (ReachTEL has the ALP primary in Queensland at 39.6, Morgan has it at 44 and the third-party poll has the ALP primary sitting between them), so it’s all much of a muchness — effectively just reducing our margin of error on the Queensland numbers. 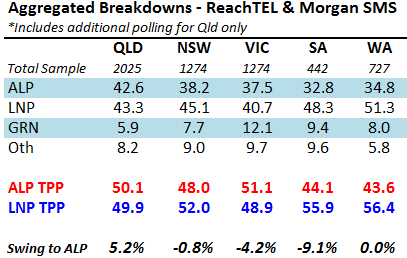 The “swing to the ALP” figure is the change to the ALP two-party preferred vote since the 2010 election. So there’s big movements to the ALP in Queensland, but large movements away from the party in Victoria and South Australia, with New South Wales and Western Australia remaining static.

If we plug those numbers into Antony Green’s election calculator, we get the ALP sitting on 77 seats, the Coalition on 71 and two independents (Bob Katter and Andrew Wilkie). The Tasmania, ACT and Northern Territory results all come from small samples in either the ReachTEL or Morgan SMS results, so they’re a bit iffy, but you get the general picture.

My election simulation produces a similar result: 76 seats to the ALP verses 72 to the Coalition, with two independents.

To understand how the ALP having a two-party preferred national result of 48 or 49% can lead to getting a majority of seats, we need to look at what margins seats are sitting on in which states, and how swings in states produce wildly different seat gains/losses because of margin clustering. 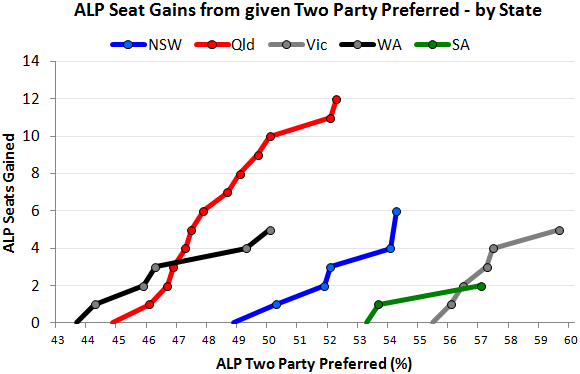 The chart above shows the “swing to the ALP” half of the equation for Liberal/National-held seats on a 7% margin or less, or for seats requiring less than an ALP 60/40 average result in any state.

Where each line crosses the bottom axis reflects what the ALP two-party preferred result was at the 2010 election in each state — so WA (the black line) starts at 43.6%, Queensland (the red line) starts at 44.9%, etc. The points on each line represent a seat. As the ALP vote increases in each state, it shows roughly how many seats would be expected to fall to the ALP for a given change in the two-party preferred.

With Queensland coming off a relatively low base at the 2010 election, a 5% swing to the ALP would deliver around nine seats to Labor in Queensland simply because so many Liberal/National-held seats sit on relatively small margins. If the same swing occurred in WA it would only deliver three seats; in NSW five seats.