Wayne Swan is donning his hoodie and heading for the exit. So how did he rate as treasurer? Bernard Keane and Glenn Dyer argue, despite his inability to communicate, he was a success. 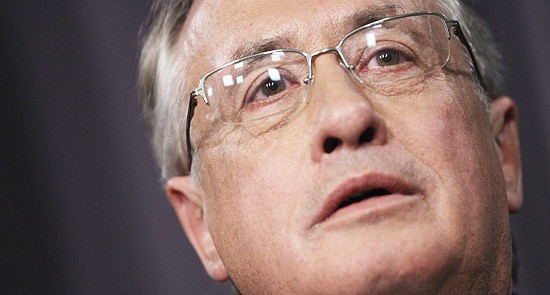 Wayne Swan was, we thought at the time, an unlikely treasurer. He’d been shadow treasurer under Kim Beazley and retained the spot under Kevin Rudd, but there had been speculation either Lindsay Tanner or Julia Gillard would be given the role in government. When John Howard and Peter Costello tried to exploit concerns that Gillard was some sort of radical socialist (!) by questioning what role she’d play in a Rudd government, Rudd seized the moment to declare he’d pick his own frontbench and that Swan would be treasurer.

In time, many in Labor would come to see it as a significant cause of the dysfunctionality of the Rudd government, including, allegedly, Rudd himself. And in Swan, Labor ended up with a treasurer and, later, a deputy prime minister, who couldn’t play the now traditional treasurer’s role, like Keating and Costello, of chief government attack dog. In contrast to Keating and Costello, Swan’s inability to communicate with any cut-through became notorious.

As it turned out, though, Swan ended up one of Australia’s most effective treasurers, and achieved that distinction while facing challenges never faced by economic decision-makers in this country in the modern era. Keating had to overhaul the Australian economy. Costello had to clean up a fiscal mess, bring in a GST and rein in a spendaholic prime minister. But Swan had to deal with a global financial crisis. The GFC and the great recession that followed was the biggest economic failure for the global economy — and especially developed economies — since the Great Depression. Instead of brushing past Australia, as it did, it could have flattened us. Business was crippled, consumers were beginning to panic and banks were cut off from offshore funding as the economy went perilously close to falling off a cliff in late 2008.

Responsibility for this is diffused among many: Glenn Stevens and the RBA, Kevin Rudd, PM&C and its secretary Terry Moran, treasury secretary Ken Henry and Treasury, and the floating dollar that boosted our terms of trade. But collectively, the government with Swan as treasurer dumped plans to slash and burn the budget in May 2008, then supported confidence in Australian banks and fired money at the key sectors of construction and retail to support consumer confidence and inject demand as a full-blown crisis erupted in the US. The result: unemployment in Australia never got above 5.8% and there was no recession, even as other Western economies crashed and burned.

Pulling back on spending

After spending peaked in 2009-10, Swan engaged in a huge fiscal contraction, bigger than any delivered since 1987. Spending peaked at 26.1% of GDP in 2009 and fell to 24.7% the following year. To accommodate carbon price compensation and Swan’s 2013 surplus commitment — more of that in a moment — spending rose to 25.2% in 2011, only to fall another 1 percentage point in 2012. This kept interest rates and inflation down and ensured that the stimulus flowing into the economy courtesy of a mining investment boom was offset by significant reductions in Commonwealth spending. Despite all the claims from the opposition, business, the media and some economists, the deficit and debt burdens never got out of control and compared to the rest of the world, both measures remain very low.

“The biggest problem for Swan’s communication, ultimately, was … that his most convincing case was invisible”

Transitioning from a mining boom without an inflationary spike

The history of mining booms in Australia is that they end with an inflationary bang that often as not paves the way for a recession. Indeed in early 2010, then RBA deputy governor, Ric Battellino, set out the task in a speech in Sydney by pointing out how all other resource booms had ended in tears for Australia. Swan is the first treasurer to see the peak of a mining investment boom come and go without a burst of inflation — indeed, interest rates are currently at historic lows and inflation right in the RBA target zone despite the introduction of a carbon price. It’s an unprecedented achievement.

True, there are plenty of flaws in Swan’s record. The deal he and Julia Gillard crafted with transnational mining companies to get rid of the mining tax problem would come back to haunt him. So too did his insistence on pandering to voters’ conviction that they were “doing it tough”. And the pea-and-thimble fiscal tricks to engineer a 2013 surplus became increasingly silly. The surplus commitment, repeated ad nauseam and which he had to humiliatingly abandon at the end of last year, was ultimately motivated by the central problem of his Treasurership, his inability to successfully prosecute the case for the government’s economic record. So poor had Labor been at prosecuting its case that it had been forced the accept the Coalition’s terms of engagement on the economy; that the only thing that mattered was the budget balance.

The caveat on that, however, was that at least Swan was still in office. Many of the politicians Swan had attended G20 meetings with in 2008 and 2009 fell victim to the financial crisis and its political impacts. The Republicans were swept from power in Washington; Gordon Brown’s Labour government was defeated; Nicolas Sarkozy succumbed as Europe entered a depression. Japan is now on its third PM and government since then. Italy and Spain nearly collapsed. In such circumstances, mere survival could be regarded as an impressive feat.

For all this, Swan endured bile from his opponents. A right-wing Treasury officer leaked material and forged documents for the opposition, suggesting Swan and Rudd were personally corrupt. Revisionists insisted stimulus had failed to work and instead the mining industry — which was in freefall in 2008-09 — had saved the economy. He was accused of politicising Treasury by the side of politics that had systematically politicised the public service when in office. Given a strong, low-inflation, low-interest-rate economy, business complained that poor productivity and “sovereign risk” were deterring investment, even as Labor’s industrial relations framework delivered significant growth in labour productivity, foreign investment hit record highs, the dollar became a safe-haven currency and Australia was consistently rated as the best destination for mining investment.

And the opposition repeatedly insisted Swan was a profligate treasurer, but could never bring itself to back any of his savings — before 2013. Signally, though, when given the choice to back Swan’s budget strategy this year, just months out from an assumed Coalition victory, the opposition suddenly decided Swan’s fiscal strategy wasn’t that bad after all, and backed it.

Swan’s stated reason for abandoning his surplus commitment last year was because of the government’s focus on jobs. That was Swan’s goal throughout his Treasurership; to support employment in complex economic times, whether it was jobs that would have been lost if the Rudd government and the RBA had failed to support the economy in 2008-09, or the jobs that might have been brought on by a mindless adherence to a surplus commitment, or the jobs that would have been lost if the RBA had been forced to respond via higher interest rates to a mining boom-engendered inflationary surge.

The biggest problem for Swan’s communication, ultimately, wasn’t his own lack of cut-through or faulty strategy, although both were big impediments, but that his most convincing case was invisible: the hundreds of thousands of Australian who would have lost their jobs but for his actions and the actions of policymakers throughout government.

Virtually none of those Australians will ever know the role played by Swan, the RBA and others in ensuring they stayed in work, were able to pay off their mortgage, able to look after their kids, able to pay the bills and keep the economy and businesses ticking over. That is Swan’s biggest achievement as treasurer.

Very true. I often wonder how the economic illiterates of this world continue to get a paying gig in the commentary of the MSM. Anyone who did commerce in years 9 & 10, or studied modern history and FDR’s new deal couldn’t deny Swan’s expertise in guiding us through the GFC.

Who pays those pipers?

You’ve done it again, Bernard and Glenn. Nailed it. Thanks

Pity none of,this ‘cut through ‘ as it was happening and is still blamed on Swan and Gillard.

I don’t blame them. I blame the commentariat who consistently reduce the real work of the past five years of Labor government to insignificance because it is not ‘movement and light’ and not in the interests of their owners, Murdoch et al. They prefer TA’s flouro jackets and three word slogans.

My concern is for democracy. Politics is not entertainment, it is the serious business of allowing people to have jobs, become skilled and participate in our society. Journalists, with exceptions like you, seemed to think the GillRd government was there to provide content for the 24 hour cycle for their amusement. Duh!

I find their current retrospectives wondering how the debate could have become so debased, hypocritical in the extreme. Where were they? I observed most of them shovelling the dirt.

Agreed, the phrase “doing it tough” uttered by the Treasurer was always a home goal for his denigrators.

Last night on Four Corners we saw a true depiction of “doing it tough”… but most of us are whining about the price of petrol or the increase in power bills (22% in Qld as from yesterday, thanks Mr Newman) which will subtract a percentage off our next European holiday budget. We are a bunch of spoilt kids.

If the other mob gets in, will shrek do as well as swan? Many say they doubt it – indeed we’re in for a recession given the non policies the other mob have displayed thus far.