Religion v feminism: which has done more for humanity?

Religion may bring eternal happiness -- but has feminism done more good for humankind than all the gods put together? In this book excerpt, a comparison of the two and why feminism is more derided than religion.

If I were to compare the effect of religion on the health, wealth and happiness of humankind with the effect of, say, feminism, I suspect feminism would win easily. Feminism has never airbrushed men out of the picture — either literally or metaphorically. It has never raised an army, never armed itself and never passed laws restricting the equal rights or opportunities of others. There may have been terrorists who were also feminists — in the IRA or the Baader-Meinhof gang, for example — just as there have been terrorists who were also atheists, but there have been no feminist acts of terror.

Feminism has never killed an opponent. Feminists have died, of course, usually at the hands of the religious. The suffragettes certainly smashed a lot of windows and even set a few fires (always in buildings they knew to be empty), but they never actually hurt anyone other than themselves. Suffragette Emily Davison was killed throwing herself under the hooves of the King’s racehorse at the Epsom Derby, crying “Votes for Women!”, and many of her colleagues went on hunger strikes when jailed for their beliefs, and then suffered the indignity and torture of force-feeding.

The evidence for feminism as a force for good is equally unequivocal. We know, for example, that the best protection for women against violence is the presence and activity of independent feminist community organisations (the presence of churches and houses of worship makes no difference at all). Not just that, either — we also know that in countries with the greatest equality between the s-xes, the life expectancy of men also goes up, because violence in general falls. We also now know, entirely thanks to feminism, that when you educate a girl and give her opportunities to earn money she would not normally have — often due to religious strictures –the benefits accrue to the whole family and community in a way they do not when you educate only boys. The phenomenon is called “The Girl Effect”.

The lives that feminism has directly saved through agitating for women’s reproductive health and rights probably number in the many millions.

Feminism has also encouraged the creation of works of art, from the literature of George Eliot and the Brontes — who, like Eliot, had to publish under male-sounding names to be taken seriously — to that of Virginia Woolf, Margaret Atwood, Hilary Mantel and Toni Morrison. Simply by agitating for women to have access to the same educational and career opportunities as their brothers, feminism has enabled female artists, musicians, novelists, sculptors and film-makers to express themselves and add to the sum of human creativity.

Until relatively recently, religion helped silence their voices and so stifled female creativity for centuries. That alone is a terrible thing to have done, and all humanity is the poorer for it.

Yet, while we’re still expected to be deferential around religious belief, including the need to obliterate historical fact so as not to give “offence”, feminism is given no such consideration. Feminism (like its sibling atheism) remains open to derision, scorn and a conspicuous lack of respect. Come to think of it, perhaps that’s actually an advantage. Perhaps that’s why such secular movements have arguably been a source of more net positive results for humanity than the more cossetted, protected and one-eyed religions. Until very recently, the one eye through which most religions looked at the world was a male eye. Thanks to secular feminism (a movement that also includes believers from many faiths), humanity is just beginning to open its female eye and see the world as a whole.

In humanity’s slow journey towards taking the female perspective into account — a journey entirely driven by feminism and almost always in direct opposition to religion — we’re seeing that when you do, you also start to take other marginalised groups in society more seriously, too. Children’s rights begin to be asserted, and we are hopeful that the Jimmy Saviles of this world will no longer get away with damaging and exploiting vulnerable children for their own s-xual satisfaction. P-edophile priests can no longer expect that the mystique and status conferred on them by their church will offer them a cloak of silence and protection as they do the same. Taking women seriously means taking what they care about seriously, too — like the right of children not to be used s-xually. Taking women seriously means taking the feminine in general seriously, so it also means the fight for gay and lesbian rights gaining ground. As the work women do gains status, and as much of that work remains caring work, caring gains status, too.

As I’ve stated before, while I acknowledge the gifts religions have given humanity, when it comes to the final balance sheet, their universal oppression, control and stifling of one half of the human race remain — for me — their greatest sin. 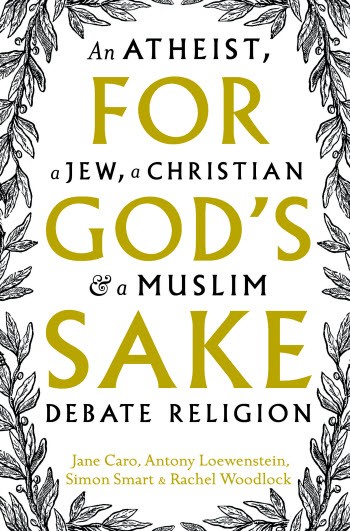 *This is an edited extract from For God’s Sake — co-written by Jane Caro, Antony Loewenstein, Simon Smart and Rachel Woodlock — published this month by Pan Macmillan Australia and launching at Sydney’s Gleebooks tomorrow

When was the last feminist war?

Didn’t Bertrand Russell say that belief in the goodness of God is inversely proportional to the evidence? As the climate decays in the decades ahead, we must expect a rise of various religions, providing explanations for the increased suffering.

Conversely, our own rationalist philosophies, including feminism and respect for scientific evidence, will be under pressure. Now may be the time for us to be engaging the religions, adding our own careful thinking to people of conscience in their ranks.

Appalled though we may be by past actions of religious zealots, these may be the very people who will most vigorously press for action against ongoing greenhouse damage. If they are seeking guidance from their own religious conservatives, perhaps our voices should be there for them to hear.

I applaud this article. All of it had to be said. This kind of ‘Truth and reconciliation’ recognition of historic culpability needs to be constantly revisited if a time of truly equal opportunity is ever to be achieved.

I rejoice in these times that seem to have stopped treating religion as unquestionable. The list of social crimes is even wider. It extends to genocide.

In the interest of adding momentum to feminism, can I comment on ‘male feminism’?

Initially, as a hippie baby-boomer, I had no trouble assimilating feminism simply on (what should have been) obvious egalitarian terms. In late teens I marched against the Vietnam invasion, and I marched against sexism. If I had supported socialism, I would be a socialist. In supporting feminism, I am a feminist.

Your article adds weight to the fact that feminism still has a long way to go – a long way – but there have been some inroads.

I am approaching 60 now and my views and support remain unchanged. In your opening sentence you mentioned “men” as the culpable collective. For many years now I have been wondering if this – which is common – risks restricting the support of male advocates.

The elimination of sexism needs all the support and press it can get. For decades I, and most men I know, have stoically taken it on the chin; being lumped with the guilty, because it was necessary. While I was a teacher we went through a period in the early 90’s, of “Positive Discrimination” where women – staff and students – were given advantage. We all supported this and I saw it introduce real and pleasing change.

My point is that I think that we may now be at the time when the significant percentage of aware men are taken into the fold by coining some new term that would separate them from the implied and laboured concept that (all) Men = bad. You did this in your opening sentence. Perhaps something more creative that ‘sexist males’, but the desired effect would be to separate aware males from the stupidly sexist. It may induce some of the culprits to want to be identified on the other team. Whatever, it should be much less likley to diminish support from ‘beleagured males’, and it is my feeling that the percentage of supportive men is significant, relevant and not guilty.

Thanks for writing this article! I had a vague feeling this book would be full of crap, and now I have some evidence!

There are so many pigeon holes in this article that there ain’t enough pigeons to go around!
The arguments are nauseatingly simplistic Feminism=Atheism=Gay&Lesbianism=Freethinking
Religion=Patriarchy=Oppression=Pedophile Priests
Yes—perhaps you need to research history to realise that what makes people good is not someone’s gender, background,political or religious affiliations age or sexual orientation—What makes people good are their personal choices and actions—
Lord Wilberforce was a male of the patriarchy but he fought against the British slave trade—he did this in the name of Christianity—on the other hand the Pope lodged the Crusades and massacred millions in vain—he also apparently did that in the name of Christianity—is Christianity what makes people good or bad?—of course not—though both Wilberforce and the Pope would argue otherwise—it is their personal choices and their individual characteristics that makes them the way they are—
I have worked with enough Gay and Lesbian Bullies to realise that not all homosexuals are nice—-but since when did someone’s sexual orientation mean a deeper understanding of the struggle for identity? And since when did Feminism mean a deeper understanding of the feminine?