Remember the push to save the Murray-Darling Basin? We check in and find the plan is broadly on-track, although two states have just missed a crucial deadline -- a challenge for new federal minister Mark Butler. 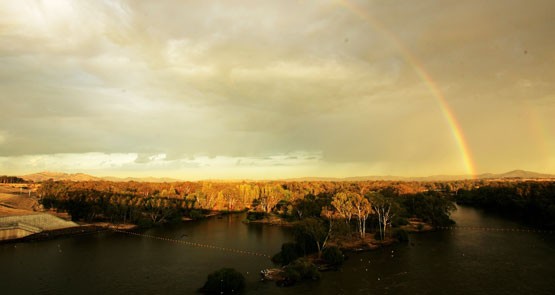 The new federal Water Minister Mark Butler will need all his hard-nosed negotiating skills from decades working in the union movement to sign up recalcitrant states to the Murray-Darling Basin Plan, following another missed deadline.

New South Wales and Queensland will not receive the 2012-13 round of federal funding offered to implement the plan, after neither agreed to the Murray-Darling Basin Plan Intergovernmental Agreement by the deadline of June 30.

Despite the last-minute change of Water Minister — former minister Tony Burke jumped out of the frying pan and into the immigration portfolio — the June 30 deadline has yet to be extended by Butler.

Essentially, the intergovernmental agreement formally seals the plan between states and the federal government, and outlines responsibilities and commitments, such as an agreement to reach Sustainable Diversion Limits (the maximum amount of water for consumptive use allowed to be removed from the basin) by 2019 and managing environmental water to meet the goals of the plan.

NSW and Queensland argue the $1.7 billion offered by the federal government — and only available to states once they have signed up — is not enough to implement all the aspects of the plan the Commonwealth insists on.

As the member for Port Adelaide, Butler would be well aware of the political issues surrounding the MDBP. Last November he sent out a press release applauding the plan as “a once in a generation opportunity to ensure a sustainable future for basin communities”.

His home state of South Australia finally signed up last Thursday, after South Australian Premier Jay Weatherill convinced the feds to offer a $265 million Water Industry Alliance Program, plus $445 million to help towards diversifying SA industry and for environmental infrastructure.

Astute Liberal Senator Simon Birmingham — the Coalition’s basin spokesman — suggested Butler as a possible replacement to Bourke back in February, during this parliamentary tit-for-tat:

“Perhaps it is time for Minister [Tony] Burke to be moved on and have a fresh face appointed to restore both upstream and downstream confidence in Murray-Darling reforms.

The MDBP now aims to return 3200 gigalitres to the basin. In the last three years the amount of water to be returned has gone from 3000-4000 gigalitres, then down to 2750, before settling on the 3200 gigalitre figure late last year. NSW, Victoria and Queensland governments all preferred the lower 2750 figure.

However, Victoria signed up to the IGA in early June and will receive $47.4 million to help implement the plan, plus $14.3 million for projects such as water efficiency programs to help farmers and irrigators. The ACT also immediately agreed to the plan, securing $2.28 million for programs to improve river flow.

The federal government will cough up a total of $1.7 billion to help states return 3200 gigalitres of water to the basin, but NSW and Queensland reckon that isn’t enough. As NSW Primary Industries Minister Katrina Hodgkinson recently said:

“What we’ve been offered for structural adjustment is just $28 million, even though we’re 56% of the basin area, when SA has been offered $24 million, and it’s only an eighth of the size of New South Wales’ portion of the basin plan.”

A ministerial spokesperson for Hodgkinson told Crikey NSW continues to negotiate with the Commonwealth over the IGA. Regardless of whether NSW and Queensland agree to it, at least Butler can rest assured the basin plan is already legally binding, after Parliament passed the last piece of legislation back in March.

And the plan is progressing: the Murray Darling Basin Authority told Crikey that last week the first set of annual watering priorities were released and three major reviews (the scientific northern basin review, the environmental watering strategy and the groundwater review for three aquifiers) are already underway. And the draft water trade guidelines will come into effect next year.