Military steps in to quell violence against Egyptian protesters

Protests in Egypt are taking to the streets in unprecedented numbers. Will it be enough to oust President Mohamed Morsi? Freelance writer Vickie Smiles reports from Alexandria in the country's north. 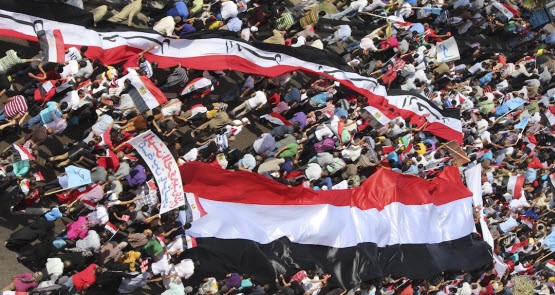 In a body blow to President Mohamed Morsi, Egypt’s military has set a deadline of 48 hours for all political forces to find a way to fulfill the demands of millions of protesters. Armed forces commander and Defense Minister Abdel Fattah al-Sisi delivered the surprise ultimatum late Monday afternoon on national television.

Al-Sisi said the country’s politicians must “meet the demands of the people or it [the armed forces] will impose a road map” to resolve the crisis engulfing the country. There was no suggestion al-Sisi wanted to fill the shoes of his predecessor, Field Marshal Mohammed Hussein Tantawi, who effectively ruled the country, often badly, after former president Hosni Mubarak was forced out. Tantawi retired last August.

The seeds of the latest crisis were sown months ago with a campaign launched by the opposition Tamarud, or Rebellion, group to get 15 million signatures on a petition to oust Morsi — more than the number of people who voted for him in the presidential elections. Tamarud also called for nationwide protests against the Muslim Brotherhood-aligned president beginning Sunday to mark Morsi’s first year in office. When a counter-campaign of Morsi supporters gathered, the fear of violence became palpable.

The trigger for military intervention was most likely the storming of the Muslim Brotherhood headquarters in Cairo overnight Sunday. The 13-hour siege left up to seven dead and many wounded. The attack was blamed on former secret police officers, not the anti-Morsi protesters who had taken to the streets in unprecedented numbers over the past two days. According to Egypt’s health ministry, the death toll from the protests stands at 16, with nearly 800 injured.

Even before the military stepped in, one commentator and protester, Mohamed Khalil, described the siege at the political party’s headquarters as a significant turning point. “This has to mean the end of the Muslim Brotherhood’s project in Egypt,” he said.

Sunday’s protests were the biggest in Egypt’s history, with millions of Egyptians taking to the streets demanding Morsi’s resignation. Seven died and more than 600 were injured, but protesters were back on Monday screaming for Morsi to leave by 5pm on Tuesday.

“Eirhal, eirhal!” they shouted (“leave” in Arabic), in a repeat of the same frenetic chants served up to Mubarak two-and-a-half years ago. Massive crowds marched along the wide boulevard to the Presidential Palace (Itihadiya) in Cairo and stood shoulder to shoulder in the now famous Tahrir Square.

In Alexandria (pictured above) they converged on Al-Qaed Ibrahim Mosque, the northern city’s own Tahrir, and in Sidi Gaber near the local Muslim Brotherhood headquarters. Members of the Brotherhood largely kept their anger in check on Sunday, but at last Friday’s warm-up protests in Alexandria they donned their new militia kit of white helmets, oversize boots, knives and sawed-off shotguns. The mood turned nasty after anti-Morsi forces torched their offices in Sidi Gaber.

Trapped in the middle was a 21-year-old American student teacher, Andrew Prochter, who was brutally stabbed after he tried to take a photograph. He later died in a military hospital nearby. Whether he was targeted as a US citizen is unknown, but both sides are using anti-American rhetoric. Earlier in the day protesters were seen carrying a banner with the words “Get out Anne Patterson”, referring to the US Ambassador to Egypt. A mock coffin with Patterson and Morsi’s pictures on the side was also on view. 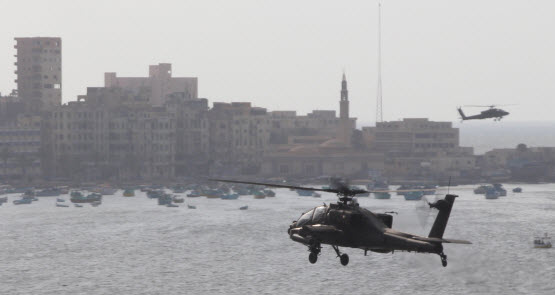 Morsi kept quiet on Sunday, and the military juggernaut also kept out of the fray until yesterday but showed its might in flashy helicopter fly-pasts in major cities, prompting thousands to point their cameras upwards. Military leaders had warned of intervention if the mass rallies descended into violence, with Al-Sisi calling for political reconciliation before the scheduled June 30 protests began. But the warning fell on deaf ears, particularly those in the presidential office.

Morsi was extremely embarrassed a week ago by an Egyptian court decision ruling that the Muslim Brotherhood had conspired with Hamas, Hezbollah and local thugs to storm Wadi el-Natroun prison northwest of Cairo during the 2011 revolution and free 34 Muslim Brotherhood leaders, including the future president. Morsi had always maintained that local residents freed him.

Whatever the truth of the prison break, the next day and a half will determine what sort of a role Morsi plays in the future of Egypt.

He’s had no impact on surging crime, rising prices, power cuts, fuel shortages, unemployment and tourism. Millions of Egyptians are not prepared to wait out his four-year term.

Just haven’t quite got the knack of democracy yet….

Ironic that the Egyptian officer corp is amerikan trained and has some basic idea of equity. Just lucky that they didn’t attend the School of the Americas for the latin juntas, with graduate degrees in torture, subversion, destabislation & liquidation.

Islamists are not known at all for giving up power once entrenched and have military/militia support. Morsi is not going anywhere. The inexperienced masses created a power vacuum that the Moslem Brotherhood were waiting for and they filled it quickly and decisively. Once in power they immediately began neutralising any forms of effective opposition. New location, same model, same mass errors and same naive belief that democracy was just around the corner… Islamists do not share power and they will need to be crowbarred out of government. Worse is to come when the public expect democratic elections…