Kevin Rudd faced a significant challenge in naming his cabinet: how could he possibly project an image of authoritative leadership and extend an olive branch to Gillard supporters with frontbenchers jumping ship in droves? 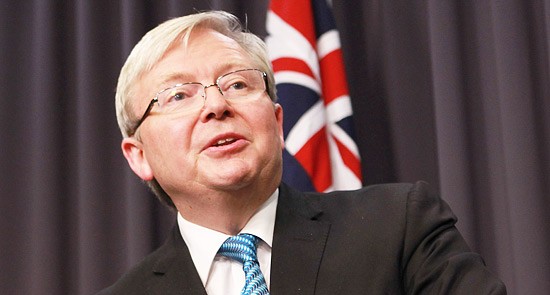 The ministry announced by Prime Minister Kevin Rudd this morning has a makeshift, temporary look; clearly this is a frontbench designed to get Labor to an election, with another reshuffle likely if Rudd pulls off a miracle and gets Labor over the line again.

Rudd’s tasks in shaping a cabinet weren’t just about rewarding supporters, extending an olive branch to Julia Gillard supporters and balancing factional and state representation; he needed to present an image of control and maturity, particularly given his theme of a transitional economy that needs a steady hand, and to address the gender issue: having ousted Australia’s first female prime minister, an image of strong representation of women was necessary.

Meeting all of these goals with a significantly diminished pool of talent was always going to be impossible, so there are thus some fudges. The biggest is that Anthony Albanese takes Broadband as well as Infrastructure. The departments won’t be amalgamated, so there’ll be no return to the Department of Transport and Communications of the Hawke and Keating years. But it reflects the dearth of sufficiently senior talent to prosecute the government’s case on the NBN; Albanese, at least, has been the House of Representatives minister responsible for Broadband for the whole period of Labor government and will be across the portfolio issues; now was not the time to promote an up-and-comer into the role, not when the NBN is a key part of Labor’s election strategy.

The other is that relatively inexperienced figures find themselves in cabinet. Jacinta Collins from Victoria come into cabinet, having been a parliamentary secretary under Gillard; so too Richard Marles, who left the frontbench after the March leadership debacle. But the inexperienced ones are generally kept to the more peripheral portfolios.

Rudd’s economic team is the strongest one in the circumstances: Chris Bowen at Treasury, Penny Wong, unfortunately lauded as “Dr No” by Rudd, remains Finance Minister; Bill Shorten, similar to Albanese, takes on Education with his existing IR duties — Shorten has big shoes to fill in terms of matching Peter Garrett’s articulate spruiking of the reforms formerly known as Gonski (Assistant Treasurer David Bradbury picks up Shorten’s Financial Services duties on the day that the Future of Financial Advice package of reforms commences); Kim Carr returns to Industry/Innovation and gets Higher Education as well, and doubtless has a brief to put together a more interventionist industry policy; the biggest risk is Mark Butler, whose successful stint at Mental Health has opened the way to move into Climate Change, as well as Environment, to oversee the transition from a carbon price to an emissions trading scheme.

The “national security” group, as Rudd portrayed it, remains intact with Bob Carr, Stephen Smith, Mark Dreyfus, Mike Kelly and Jason Clare all remaining where they are, at least until the election, when Labor will lose Stephen Smith.

Some Gillard supporters hit the fence; some didn’t, and ditto Rudd supporters. Andrew Leigh cops it for being a prominent Gillard supporter, and he also had no faction to protect him. But Jan McLucas, whom Rudd dumped during his first term as prime minister, remains in Human Services. Rudd supporter Melissa Parke gets a long-deserved promotion to the new role of Minister for International Development. But Anthony Byrne, a key Rudd lieutenant, remains on the backbench, despite calmly shepherding data retention to a low-key end in his role as head of the joint committee on intelligence and security.

But this won’t be the cabinet that governs Australia after the election if Rudd wins.

BERNARD K: Your article looks half-finished. Almost as if you know who the cabinet will consist of if Rudd wins?

I keep reading this “dearth of talent” line and how the loss of Ministers has put Rudd in diabolical straits. Really? Swan was at the end of his political shelf life if not past it. Emerson had a thankfully brief career as a singing Parliamentarian and slashed billions from unis. Conroy is a factional Dalek of the worst kind who wanted to censor the net, and Ludwig was mediocre and likely in cabinet as Daddy was a Rudd hating union boss. Garrett was recruited to give Labor standing with Green voters;his credibility in this area is now close to absolute zero. Combet was a loss, a talented and from appearances decent bloke.
Many of the women now in cabinet are talented such as Melissa Parke and Catherine King. However prepare for the assault from the ACPs–Abbo Chauvinist Pigs–and MCPs- Murdoch Chauvinist Pigs. You just aren’t up to it are you dearies??Heard it all before.

Please! Can we desist henceforth from making a song and dance about more women in the cabinet, the media is hitting this angle with a vengeance today.

We have had enough of this cr@Patricia Rego for the past three years, please let the era be over. Just name the new ministers – without a chromosome count. I actually believe Rudd when he says he works on meritocracy.

Well of course it is a short term cabinet! When in opposition they know it will be different! Edward James

They are all there on merit says Prime Minister Kevin Heiner Rudd. Well lets see how many are there after the peoples exercise their votes for change below the line! Edward James