The Crikey Indicator this morning stood at 76.4% probability of the Coalition winning with Labor at 23.6%. That does not quite put Labor back to the 25% plus at which it began the year.

The gap narrows. The gap between Coalition and Labor, as measured by the pollsters and the Crikey Election Indicator, has certainly narrowed as expected but it is the Coalition that will be happiest with the actual figures. The Labor poll improvement in the four to six point range is less than I expected, although maybe there is more improvement to come as voters take in the meaning of the change from Julia Gillard to Kevin Rudd. It will need to if the conventional wisdom, to which I subscribe, is correct and that Labor will get a honeymoon boost with its support declining as polling day approaches. 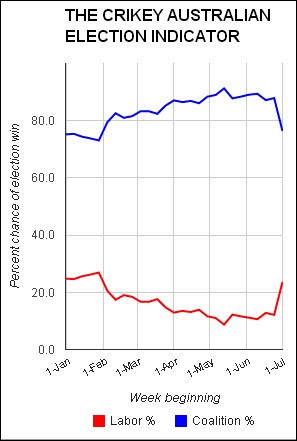 The Crikey Indicator this morning stood at 76.4% probability of the Coalition winning with Labor at 23.6%. That does not quite put Labor back to the 25% plus at which it began the year.

Getting it right again. Chunky Bits readers have acquitted themselves well once again in predicting the trend the pollsters would show. Their average prediction was for today’s Essential Report to show two-party preferred figures of 48% for Labor and 52% for the Coalition. While the normal two-week rolling average figures we publish in Crikey are 47% and 53%, the figure based on the sample for the single week after the leadership change was 48% and 52%. 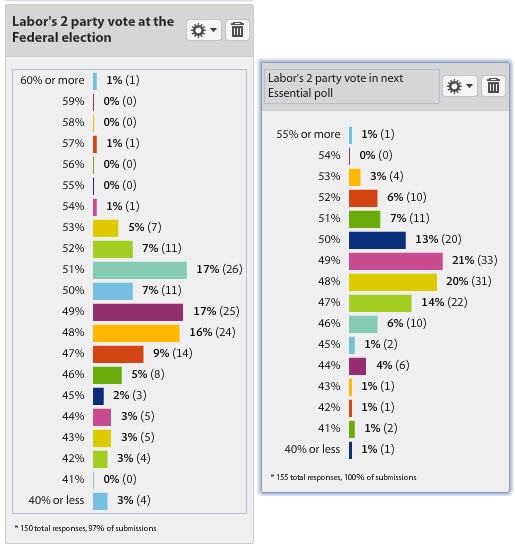 As to the future, the collective Chunky Bits wisdom is for an election day result of Coalition 51.5% to Labor’s 48.5%.

No horse race coverage at the Hun. There’s no way Melbourne’s Herald Sun is going to be accused of being like me and covering the election like a horse race. No. This election business is far more important than that. 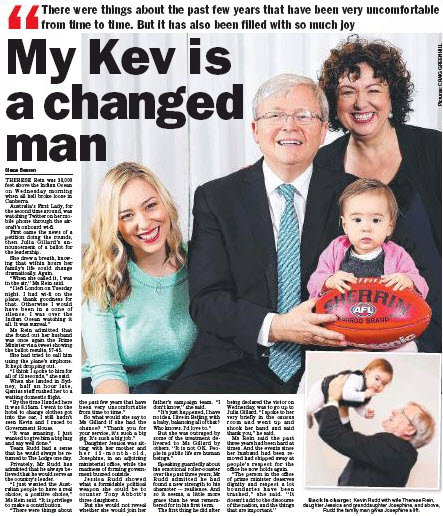 That’s right. It’s as important as Aussie rules football. And Rudd well knows it. For the Hun‘s family photo on Saturday he hugged a Sherrin along with his grand daughter.

Bringing back John Howard. The Victorian Liberal Party brought out Howard for the launch of its federal campaign on Saturday. An odd choice to have a loser in the prime position which says something about what the tacticians think of Tony Abbott’s popularity. 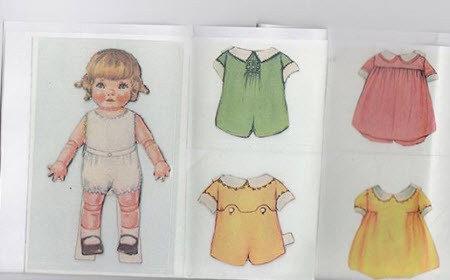 Is it just me or does the Crikey Election Indicator sort of remind you of a set of Jaws..

How long before they bite him?

As for that launch – bugger Howard, why did they use Billson and Mirraball doing their impersonations of Jim and Tammy Bakker fronting their “PTL Club” to launch it?

[Unless PTL is “Pretty Tacky Liberals”?]

This indicator thingie looks as rigorous as a Miranda Devine op-ed.