As the ICJ meets, some history on Japanese whaling

Australia's anti-whaling case against Japan in the International Court of Justice is entering its second week. Author and researcher John Newton takes a look at the history of Japanese whaling. 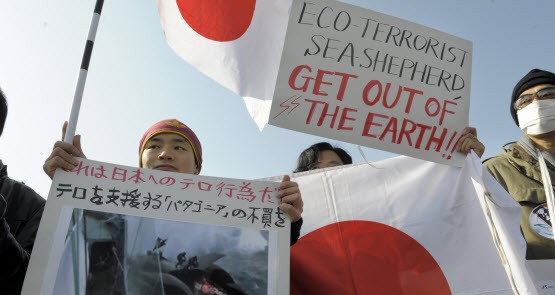 The Japanese have been eating whale for a lot longer than conservationists have been protesting against it. Does that justify their giving themselves a permit to slaughter 850 minkes, 50 humpbacks and 50 fin whales every year, with the aid of exploding harpoons and factory ships? Not necessarily. But it does help to understand their persistence. As does a little background.

By the Edo period (1600-1867), whaling was an established industry, thanks in part to Buddhist proscriptions against eating four-legged animals. While European whalers used large ships to hunt whales, the Japanese developed a different method. Lookouts were posted on hills, and when whales were spotted, signals were sent and an entire village of 600 people would spring into action. The whale would be surrounded, driven to shore by oarsmen banging their oars on the water. The villagers would then throw nets over the whale, leap on its back as it thrashed and struggled and harpoon it. The village would then process the whale, and unlike Europeans, who took only oil and bone, every part of was used, right down to the p-nis, which was made into a tonic to reinvigorate the whalers.

But even then there was debate over the morality of killing whales. In an illustrated book called The Battle with the Whales at Ogawajima published in 1840, the author writes of how, in its final moments, the whale turned to the west, the Buddhist paradise. “How merciless it is to feel no pity for that resounding cry of pain as they face the west to die …”. At the completion of every hunt, there was a Buddhist service for the soul of the dead whale.

Around 1900, with the help of the Norwegians, Japan entered the modern era and began using explosive harpoons and ships (but not yet factory ships, which weren’t devised until 1925). By the early 20th century there were five companies hunting and processing whales. In 1910, the man known as the father of modern whaling, Oka Juro, predicted whales would one day be hunted in the Antarctic. In 1910, drumming up investment, Oka Juro delivered a speech that advanced two theories. The first he called “extermination through ceased propagation”. Over time, smaller animals would be killed, and the females with reproductive capacity would be fished out of existence, resulting in extinction.

The second, cheerier theory, was “inexhaustible supply”. The theory was that as long as the source of food was assured in a fishing ground, it would remain viable. When asked about the scarcity of blue whales and humpbacks (even then), he explained that because they were alive to the dangers in one place, they had merely gone to another.

Even then there were those opposed to whaling. In 1911, the local fishermen at Same Village in Aomori Prefecture, a region with a tradition of venerating whales, burnt down a whaling station whose run-off was polluting the environment and endangering their fish supplies.

In 1942, at the height of Japanese ethno-centrism surrounding the outbreak of war in the Pacific, another industry theorist, Baba Hogei, defined the two groups advocating restrictions on whaling. Conservationists argued that whales were “relics of a former age” and that it was a “shameful outrage” to drive them to extinction. The second, the whaling industry group, argued that unrestricted whaling could lead to extinction, and limits should be applied  to ensure “long-term continuity of the business”. A third group believed that as long as whales were in extinction’s waiting room, the Japanese should “take as many natural products as possible and apply them to the welfare of mankind”.

It’s hard to know who is ascendant today. Whale researcher Hiroyuki Watanabe (whose book Japan’s Whaling: The Politics of Culture in Historical Perspective is invaluable) writes that after 1945, argument simply disappeared. He concluded that the effect of whaling on long-term whale populations had fallen under the topic of “things not to be said”.

He cites whaling historian and commentator Kondo Isao, who found that from 1950 the facts of the sperm whale harvest were concealed and lies told. For example, after 1965, when quotas were introduced, a company with a quota of 924 whales in the 1970 season took 1410; not an isolated instance. Similar concealment, Kondo claims, was going on in the Antarctic: “Not only has the Japanese whaling industry never shown any interest in whale conservation, but it has also been slow to investigate the reason for reduced catches.”

Taking advantage of the International Whaling Commission’s Article VIII-1, Japan has for some years issued itself licences to kill whales for “scientific purposes”. But are whalers under-reporting their catches?

Has there been any change in attitudes? Not according to the mayor of Taiji (remember The Cove, the documentary about the dolphin slaughter? That was Taiji). In 1994 he wrote:

“No matter how viciously the environmentalists and animal rights activists condemn us, we will not give up whaling. We simply cannot do that, because it would mean to us not only significant economic loss, but also a loss of our pride and the unique culture of our own.”

In 2008 the Tokyo Two, Junichi Sato and Toru Suzuki, revealed that whale meat was being sold by a member of the Institute for Cetacean Research. The Tokyo Two  were arrested and convicted for stealing whale meat. Their sentences were suspended for three years.

Meanwhile, in The Hague …

*John Newton’s book A Savage History: Whaling in the Pacific and Southern Oceans, published by NewSouth, has just been released

Meet the US scientists who are legitimising Japanese whaling

Crikey Clarifier: Australia v Japan in a whale of a case

like all cultural justification arguments they must be balanced against the reality and knowledge of now. Japan has traditionally hunted whales but,it is arguable as to what level whaling was used by indigenous japanese. It is my understanding at least, that whaling was limited to a few coastal communities. Broad scale consumption of whate meat isa relatively recvent phenominon. Just like human rights, the treatment of women and animal cruelty issues, whaling must be seen in a modern context surely. Is the killing, now totally unnecessary, of whales over rule the ethical and conservation concerns when it has gone far beyond any traditional practices?

It is good to see that some of the history of Japan’s whaling has been mentioned here. However, some important details have been excluded from the article.

For example, Juro Oka brought Norwegian modern whaling technology to Japan, which included Norwegian-built ships, cannon-fired harpoons with explosive tips, and actual Norwegians as crew. This was done for the purpose of profits from the mass production of whale oil — just like every other industrial whaling operation in the world — and Japan exported whale oil to western countries in the early 20th century.

Furthermore, Jun Morikawa, author of “Whaling in Japan: Power, Politics, and Diplomacy”, has written that Japan’s whaling continues for the benefit of corrupt bureaucrats who ensure ongoing tax-funded subsidies for whaling in order to secure jobs for themselves in the commercial industry when they leave public office. This type of corruption is so common in Japan’s government they have a word for it: ‘amakudari’.

Japan’s commercial whaling industry has been effectively nationalized. Japan’s government spends about ¥782 million (US$9.78 million) annually to prop up the whaling industry. Whaling is actively promoted by the government through groups like the LDP created ‘Parliamentary League for the Promotion of Whaling’ – mischaracterizing the industry as a pillar of cultural identity while obscuring regions of Japan where whales were historically worshipped as gods of good fortune and never eaten. While most citizens of Japan remain indifferent to whaling, a collective motivation to preserve ‘tradition’ is manipulated to support the whaling industry.

By the numbers whaling has nothing to do with Japanese food security. According to FOODEX Japan, in 2011 the nation of Japan imported over 500,000 tons of beef, at least 233,000 tons of chilled pork, more than 426,000 tons of chicken, and 2.69 million tons of marine products. The current estimated stockpile of whale meat in cold storage amounts to about 6,000 tons total – at the expense of over 17,897 whales killed by Japan under objection and special permit (as of 2011) since the moratorium on whaling began.

Unable to sell most of the whale meat at auction, Japan’s government uses even more public funds to ensure whaling will continue by using funds form the education budget to supply whale meat for school lunched. Another recent announcement indicated funds from the defense budget would be used to supply whale meat to Japan’s defense forces. And in an explicitly corrupt act, Japan’s government actually raised taxes for the specific purpose of reconstruction in areas devastated by the tsunami and earth quake disaster only to redirect millions of dollars of that funding to Antarctic whaling.

What’s clear about Japanese whaling is all pretext of tradition and culture was abandoned for modern methods of mass production and only remains a poor excuse to demand exceptions from international conventions that prohibit whaling. Today, Japan’s whaling industry merely sustains ongoing corruption of public officials and profits for their business cronies at the expense of international fisheries regulations, conservation efforts, and a large number of whales.