ALP veteran Simon Crean is heading for the door -- and Geoff Lake is in contention to succeed him in Victoria's federal seat of Hotham. Crean is the latest high-profile Labor departure, leaving more holes in the party's federal election plans. 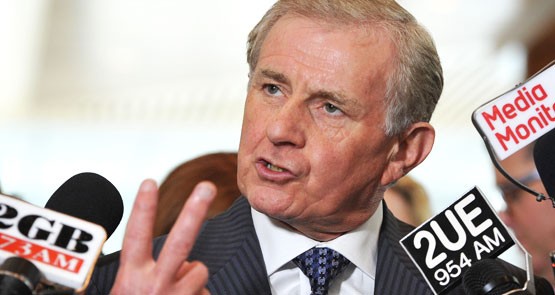 Long-serving Monash councillor Geoff Lake has emerged as the leading contender for preselection in Simon Crean’s Victorian seat of Hotham after the veteran ALP backbencher announced his retirement from federal politics this morning.

Lake, who became Australia’s youngest ever elected mayor at 22 in 2002, has long held national political ambitions and is widely expected to throw his hat in the ring if Labor calls for a rank-and-file ballot to finger Crean’s successor.

Crikey first speculated about the National Union of Workers-aligned star’s abiding interest in the seat close to three years ago, and Lake confirmed to Crikey this morning he was “certainly interested … but I’m going to have to talk to my family and talk to people that are close to me in the electorate”. He is president of the Hotham federal electorate area and unlike Crean, resides within Hotham’s boundaries.

Crean told ABC Radio today that there must be a ballot to decide his replacement, however it is still possible Labor’s national executive could parachute a candidate if Prime Minister Kevin Rudd decides to move to an early election.

Dandenong councillor and Lake fan Peter Brown told Crikey he hoped Lake, a Minter Ellison lawyer, “maintains Black Caviar’s record … putting factional politics aside Geoff is the consummate professional both in his field as lawyer and as an advocate of the Labor Party. He really is an exceptional young person.” Brown says there’s daylight between Lake and other potential contenders.

The last time Hotham went to a ballot was in 2006 when then-NUW official Martin Pakula took on Crean, leading to a tense night of voting at the South Oakleigh Bowls Club before Crean emerged with a 196 to 88 victory. In the wake of that vote an exultant Crean proclaimed “we’ve smashed the Cambodian stack, the Vietnamese and the Latin American stack”, a quote gleefully recycled by then-health minister Tony Abbott in a 2006 Fairfax opinion piece.

Hotham is broadly considered NUW territory, although the situation on the ground is fluid with some ethnic bloc support and a significant number of Left and Labor Unity, as well as NUW-aligned, rank-and-file members. Under the party’s ‘stability pact’ signed by Unity and the Socialist Left in 2009, it is listed as an Unity seat, suggesting some right members might fight for control.

Crean, a Melbourne High School old boy, was first preselected in 1990 after unsuccessfully running for Melbourne Ports against Clyde Holding when his father Frank Crean retired in 1977. In 1979 Crean junior was elected general secretary of NUW-forerunner, the Storemen and Packers Union. He told a press conference in Melbourne this morning the Labor Party needs to act on reforms to preselections and called for unions to stop spending members’ money on the internal elections of other unions in the same factional orbit.

Lake, now 33, is a former president of both the Australian Local Government Association and the Municipal Association of Victoria and is a director of Vision Super. He had a stellar five-year run on ABC News Breakfast’s popular 6.45am newspaper review segment, but has sadly not been seen since the end of 2012.

Another name mentioned in dispatches was SBS corporate affairs director and former Rudd foreign policy adviser Peter Khalil, who had been previously linked to Julia Gillard’s seat of Lalor. But Khalil lives in Hotham, suggesting he could nominate, especially if a demand for a woman to replace Gillard bears fruit. Another contender could be one of the dynamic Labor Unity-aligned husband and wife duo of Garth Head and Rosemary Barker. Head ran (and lost) against Crean in 1990.

The issue of the party’s affirmative action policy is likely to arise again, especially if “death spot” Senator David Feeney wins his battle for Martin Ferguson’s seat of Batman against Mary-Anne Thomas. Five hundred members fronted up yesterday to cast their vote at Ferguson’s electorate office and the result will be known after a meeting of Labor’s central public office selection committee tomorrow night.

Crean has achieved almost nothing in 23 years except to be one of the first to jail refufees.