Ex-AWB figure moves on? Is is true that ex-AWB (formerly known as the Australian Wheat Board) trading manager Peter Geary, who was caught up in the Iraq wheat bribery scandal, is moving on to greener pastures? We hear he has “sold up everything he owns and purchased tracts of farming land near Yarrawonga on the Victoria/NSW border”.

In case you’ve forgotten, Geary got quite a working-over in the Cole enquiry into Aussie kickbacks paid to Saddam Hussein’s regime. Commissioner Terence Cole’s findings included this:

“Mr Geary provided the Inquiry with two statements which were of no assistance. He prevaricated in his evidence, declined to address questions put to him, and obfuscated. I am not able to accept him as a frank truthful witness, nor can I accept that he had as little knowledge as he said.” (Read here from page 226 on.)

Cole found that if his findings were correct, “Mr Geary might have aided, abetted, counselled or procured the offences that AWB might have committed”. Cole recommended the matter be referred to a taskforce to consider whether criminal proceedings should be instituted against Geary. In the end, civil actions were pursued against Geary (and other AWB figures).

Debt collector spills the beans. We hear that a certain candidate for the federal election has left behind “one of the thickest files” among debt collectors in the city the candidate once lived in. We hear debts included sport coaching for the candidate’s child, a new kitchen, and other home renovations. Did the local magistrates’ court get involved? We’ll look into this some more … if you know of interesting gossip on any candidate, Crikey is keen to hear from you (and we don’t even need your name!).

Polling tricks. Tips is curious about modern-day polling practices (why does Ms Tips never get polled?). We asked for your recent experiences — email us if you’ve been polled. We’re keen to see which areas are the most heavily polled, who the pollsters want to talk to, and what kinds of questions are being asked (some sound highly leading). Seems there’s a few bots out there:

“I was polled by Reachtel last week — automated system. I live in Queensland. Asked privatisation questions, would I vote for a government that privatised health and education services, also asked if I was aware of the lobby group representing health workers.”

“I was polled last week by a robot with an overseas command-line interface. It wanted to ask me some questions about the election. I hung up.”

“I’m a 66-year-old with a landline and was recently polled by the mob doing six electorates in Victoria/Queensland. I live in Jagajaga, Jenny Macklin’s seat. The poll was interesting because, while it was about federal issues and Gillard/Abbott, it asked me (in effect) whether I liked [Victorian Premier] Denis Napthine or not. I said he didn’t bother me one way or the other. Because my wife did her postgraduate statistical studies in, amongst other things, survey design, I was aware of the possibility I was being sneakily asked (on the pretext of whether I preferred Gillard to Abbott) whether I preferred Napthine to a block of chocolate. Hence I gave an equivocal answer. But writing this now as I munch on my chocolate, I’m happy to state I’ll be voting for Macklin in Jagajaga.”

“Silence is the key” at Maccas. Good to hear that your taxes are being spent hiring police to allow McDonald’s to build a fast-food mecca at Tecoma, near Victoria’s beautiful Dandenong Ranges. A tipster sent us this cheat sheet, which is apparently part of a site induction manual for those working on the new Macca’s. 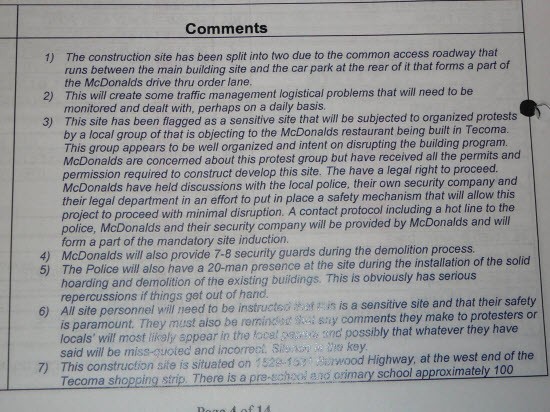 The manual reveals that taxpayers are funding a direct hotline between those building the Macca’s and the police, and police will have a “20-man presence at the site”. All site personnel “must also be reminded that any comments they make to protesters or locals’ (sic) will most likely appear in the local papers and possibly that whatever they have said will be miss-quoted (sic) and incorrect. Silence is the key.” No surprise that the standard of spelling at McDonald’s  is similar to their standard of cuisine, i.e. very low. And by the way, did you know that McDonald’s gives free or heavily discounted food to uniformed police, ambos and fire department staff?

We sent the induction manual to McDonald’s, who said it was “not a McDonald’s document. It is our understanding that it was drafted and submitted by the building company to council as part of the site approval plan to address safety and security requirements on site.”

While we were hanging out on the Macca’s website researching this tip, we rather enjoyed this official scam alert:

Tut tut, Rupert. There is a major problem with this tweet. You would think the world’s most powerful media mogul, who commands newspapers across the globe, would know how to use “it’s”. Fail.

Friday crazy. Well it’s the Friday of a very big week for news, so Crikey is bringing you a little bit of cray to start your weekend. We’re not quite sure about this tip we received:

“Osama bin Laden and the September 11 highjackers were in Australia in the July before September 11, 2001. How do I know because I met them.”

Of course you did. They were having coffee with Harold Holt.

Why can’t we ask these pollsters to tell us what they think first?

I was wondering what the leader of the opposition thought about the change of PM from Gillard to Rudd.

And now I know. The leader of the opposition, Rupert Murdoch, has tweeted that he disapproves.

So, I predict that the Australian and other News Limited newspapers will change their present impartial stance and commence a witch hunt against federal labor.

While I am loathe to defend Rupe, iPhones automatically change its to it’s. It’s very annoying! In the future, the confusion between the possessive and the contraction will be irrelevant as auto correct becomes the all powerful truth . . .

Would love to see the other 13 pages of the McD’s document.