Rudd the Builder’s ‘new politics’ of peace and policy

Labor has tried to beat Tony Abbott down with charges of negativity. It didn't work. Kevin Rudd is changing the play, hinting in question time yesterday of a new strategy. 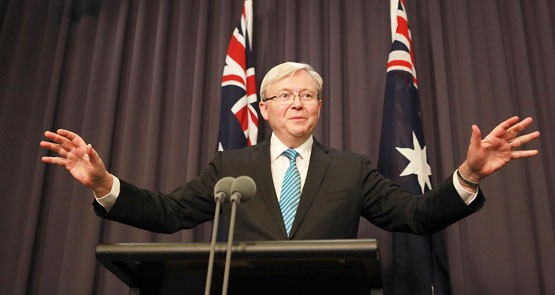 Differentiation, that is, not merely from his predecessor Julia Gillard, who sat with Wayne Swan nearly as far away as it is physically possible to be from the dispatch box while still actually remaining in the chamber, but differentiation from Rudd Mark I.

Rudd had already shown up very late to his scheduled media conference on Wednesday night, reminding everyone immediately of his habitual and annoying tardiness as PM.

But if Rudd still has a problem with clocks, his penchant for epically long question time answers seems to have vanished. The rules have changed since his last turn as PM, with time limits on answers. Would the PM who had notoriously stood at the dispatch box and bored his country for up to seven minutes at a time — brutalising the English language with a combination of incessant repetition of focus group phrases, verbal sludge and hokey phrases from an imaginary Queensland past — reappear?

It briefly seemed so as Rudd rose to take the opening question and began by declaring he’d take the second part of the question first. But Rudd Mark II turned out to be a far more succinct version than the original, and rarely even approached the four-minute limit on answers. Gillard and Swan invariably used up all four minutes of both opposition questions and Dorothy Dixers (“I’m asked, madam speaker, if there are any obstacles, and sadly there are …”) to assail the opposition.

Indeed, Rudd wasn’t interested in assailing the opposition at all. He made a few quips about policy inconsistency, and referred to Opposition Leader Tony Abbott’s record of undermining Malcolm Turnbull. But having been Rudd the Destroyer for Gillard, he now clearly wants to be Rudd the Builder, anxious to bring a new civility, a new focus on policy, to politics.

Thus, most questions to him from the opposition were flicked away. “The old politics of negativity,” he responded to a Christopher Pyne question. “Old politics whereby we scream at each other,” he labelled a follow-up. Abbott had “the old politics of simply negative interjections and invective” thrown back at him, “as opposed to building a constructive argument for one vision for Australia’s future”.

“Labor has been attacking Abbott, talking about Abbott and his faults, for over three years, with little success. Rudd’s decided not to continue the assault …”

Clearly Rudd remembers the time he got Abbott to agree to debate him on health reform at the National Press Club in 2010 and Abbott showed up primed for a fistfight, only for Rudd to start by singing Kumbaya. Abbott comprehensively lost the debate because he looked like he was more interested in attacking Rudd than improving health outcomes for Australians. In fact, Rudd is so enamoured of that moment he wants to repeat it, inviting Abbott to debate him at the “National Health Club”. I’d back the athletic Abbott over the decidedly paunchy Rudd in such a venue, but Rudd might have a better chance at the National Press Club.

The tone wasn’t just Rudd’s. The normally pugilistic Anthony Albanese, who probably has “Tory fighter” on his passport, answered his first question as Deputy Prime Minister by talking about “planning to get the Woolgoolga to Ballina section of the Pacific Highway shovel ready” (remember “shovel ready”?). He made a passing reference to the opposition’s lack of interest in infrastructure advice, but otherwise the usual and highly entertaining assault on the Coalition was absent. Instead, Albanese spoke about the impact on ambulance officers dealing with road accidents, and his pride at making a difference to road safety.

And when Chris Bowen, the nation’s new Treasurer, rose to answer a Dixer there was no mention of the opposition at all. Bowen is one of the few Labor figures capable of cutting through, although not when he was consigned to the Purgatory of Immigration by Gillard. He briskly recited a number of facts about the strength of the economy, spoke about the issue which has already become the key theme of Rudd Mark II — the maturing of the Chinese economic boom and the transitionary nature of Australia’s economic circumstances — and then spoke about how he had already been in touch with senior business figures. “We will continue to leave our doors open to business to make sure that we work together co-operatively as we manage this transition,” he declared. There was none of Swan’s laboured attacks on “Sloppy Joe” and “the Three Stooges”.

You can see where all this is going. Labor has been attacking Abbott, talking about Abbott and his faults, for over three years, with little success. Rudd’s decided not to continue the assault, but to try to elevate himself above it all by calling for more constructive politics — which voters always say they want, even though negative campaigning demonstrably works. Apart from anything else it functions as a glib defence against Coalition attacks on Rudd’s untrustworthiness, a line they tried to rehearse yesterday. If this approach is successful, the more the Coalition attacks Rudd, the worse they will look. “Old politics!” will be Rudd’s response to anything negative, or unrelated to policy, from the Coalition.

Indeed, the opposition looked a little jaded yesterday; there was no all-out attack on Rudd; then again it was the last day of Parliament, probably, before the election, and question time is a somewhat clunky forum for pursuing the internal issues of your opponents. The contest proper will be out in the real world, on the TV airwaves and on the streets of marginal seats. Rudd looks to be significantly altering Labor’s tactics in that contest. How Abbott responds will be fascinating to watch as well.

I seem to remember a ‘peace and policy’ approach worked very well for Mark Latham. It succeeded, for a while, in wrong-footing Howard. Unnerving for political leaders when their opponents won’t oppose.

Labor has tried to beat Tony Abbott down with charges of negativity. It didn’t work. Kevin Rudd is changing the play, hinting in question time yesterday of a new strategy.

And the ALP’s brilliant strategists could not come up with idea last week because?