Our new (old?) Prime Minister had a rather churlish beginning, refusing to name his predecessor in Parliament.

Forget the referendum, just go. This is one of those “he who hesitates is lost” moments. Kevin Rudd should be holding the next election at the very first opportunity. Forget about that local government referendum. It is a matter of little or no consequence in the overall scheme of political things and is probably doomed to failure even if held.

Labor will get a boost in support because of the replacement of a prime minister who was widely disliked with one who is widely liked. The electoral chances are greater with the shortest time possible for the Coalition to mount its memories campaign based on why Labor sacked Kevin Rudd the first time around.

Predicting the outcome. My much-cherished readers have shown considerable aptitude at picking the trend of public opinion. Every bit as accurate as the findings of opinion pollsters, it seems to me. So here we go again.

This time your judgment is required to predict what the Essential Report to be published in Crikey on Monday will show and, more importantly, what the outcome will be when the election is finally held. Make your predictions here. 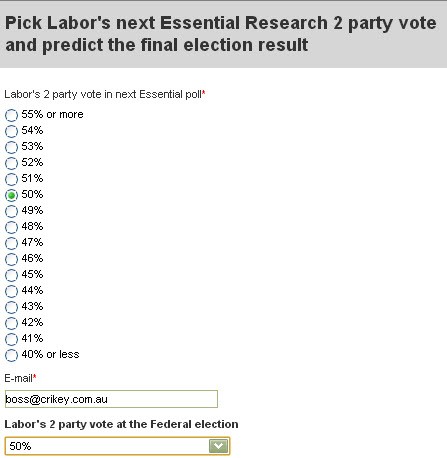 And the winner was… Our congratulation and a First Dog calendar goes to reader Jeff Miles for winning our “predict the day and time” of the leadership challenge contest.

Tributes without names. In his first address to the House of Representatives as a reincarnated Prime Minister, Kevin Rudd paid what the ABC called “tribute to Julia Gillard.” A rather strange “tribute”, I would have thought. He didn’t even mention her name. Read and judge for yourself.

A rather churlish beginning. I don’t think that’s a particularly ungenerous recognition of Julia Gillard. Referring to her former title sounds respectful to me, rather than churlish.

By the rules of the House he could not have named the individuals. It would only have been acceptable, if clunky, to name them by their seats.