Gillard’s knifing had nothing to do with the patriarchy

The chattering feminists are out in force, conflating the ALP caucus with "men" and Julia Gillard with "women". They are not the same. May Gillard be remembered for more than her gender. 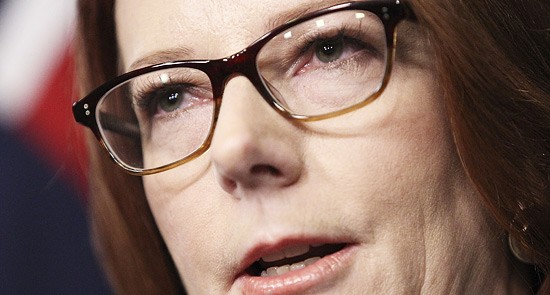 After Wednesday, the nation has a 100 Hz headache, and the pain of a night spent in front of the news was only compounded yesterday morning by Radio National guest Anne Summers, who presaged much of the morning’s written commentary in her conflation of “men” with “ALP” and of Julia Gillard with all women.

She proceeded in print: “It’s not just about her, it’s also about us.”

Here, here and here we encounter the argument that Gillard’s defeat was indivisible from the brutality of an entire gender; just as her victory was shared by all women. She’s every woman, apparently.

It does not explain nothing.  Gillard’s double-negative is called a litotes: an understatement that is negated to prove its opposite. Surely “it does not explain nothing” can now join Victoria’s “we are not amused” as one of the best examples of the form as uttered by a female principal. Litotes. It is a charming figure of speech — as is “synecdoche“, a minor crime of which Summers and Co are culpable. A synecdoche is when a part of a thing is used to refer to the whole of a thing, or, indeed, vice versa. Synecdoche is when we call our car our “wheels”, our government “Canberra” or a patriarchal system of social organisation “men”.

Well, it is either synecdoche or massively stupid. To conflate “men” with an economic, social and cultural order that reproduces itself by means far more devious and complex than even Kevin Rudd is just not possible. Nonetheless, Summers was earnestly synecdochic in an address she now calls the “Newcastle Speech“, where individual acts of awfulness became interchangeable with patriarchy.

Before Summers’ speech, I had no idea that unemployed cartoonist Larry Pickering still owned a pack of Derwents. Summers, however, used this piffling man’s piffling work as hard evidence of s-xism just as my colleagues Mia Freedman, Jane Caro, Van Badham and this terrible woman in The Conversation — who seems unable to build a sentence without taking a dump on the language — have taken Gillard’s dismissal as a testimony to the ties that bind a gender to its unfortunate history.

Synecdoche is appealing, but clear distinctions are also useful. Gillard is not all women and, the “Newcastle Speech” notwithstanding, the former PM’s treatment by cartoonists consigned to dusty corners of the internet is not broadly instructive. And, Gillard’s ousting by a slim caucus majority tells us nothing — not even something — directly about the patriarchy; nor does it tell us anything about the ALP that we didn’t already know: it is an organisation driven by polls, factions and focus groups. Not actually by the patriarchy.

Look. Gillard could have been a third-gender Wiccan made entirely of brie and the ALP wouldn’t have given half a shit so long as her “dissatisfied” rating had remained somewhere north of Satan’s. Personally, I liked the girl and I remain amazed that she pushed just and traditional Labor reforms to taxation, education and health through with a minority government. Oh, and she put a price on carbon, too. As Wayne Swan said, therein beat a great Labor heart.

But now, a good deal of the conversation by women — while it does mention these achievements — is focused on how Gillard’s dismissal is the dismissal of All Women. This synecdoche is broke.

In the hours before Wednesday night’s spill, a member of the (perplexing and hobbyist) Texas Senate filibustered on the pro-choice side of an abortion bill. Wendy Davis’ international supporters uttered variations on the “this is men making decisions about women’s bodies”  theme. No. This is not men telling women what to do; it is the state intervening in the individual’s body. Men are not the state, the ALP is not the patriarchy, and Julia Gillard is not all women.

The electorate IS an ass, though. I will give you that.

Vale Gillard. May this flawed but decent leader be remembered as something more than a great gender.

Wonderful article, Helen. You encapsulated my thoughts and arguments with a depth of class and insightfulness I could not hope to achieve.

Anyone who believes her failure is a result of her gender has forgotten her large early 2PP lead in the polls in 2010. She was a woman then, too.

What I find most intriguing in this saga is how Gillard is portrayed as the standard bearer for women’s advancement in politics and how her demise has set back that cause?
But for a straw poll re “reality”, look to the recorded history? And what better record of attitude than recorded by “Murdoch’s trollops*” – women/sisters all, recording events since she took over?
The ratio of those – how many of them have been more prone to give her an impartial run : how many were more inclined to bitch about everything about her persona; from her appearance, the way she dressed to the way she talked, seemingly intent on “scratching her eyes out”?
To let her go : to run her down?
Of course now she’s been deposed, they’ll be turning on Rudd – for the way he did her in, like they wanted too and were urging others too?
Maybe the biggest glass ceiling to women in politics is to be “joining Labor” – if you heed his “harpies bizarre”?

Razer’s article is simplistic. Sure, the caucus dumped Gillard because she was unpopular with the electorate, but how did she become so unpopular? It is not sufficient to blame this on ‘the electorate’ being an ass.

Sure, the prohibition of abortion is ‘the state intervening in the individual’s body’, but who runs the state and are any of those bodies male?