Notes from the Brazilian spring: it’s about more than bus fares

It started about the cost of bus fares -- but the Brazilian spring has morphed into something much bigger. Brazilian-Australian journalist Naiara Carrillo explains why they're revolting, and points to early successes. 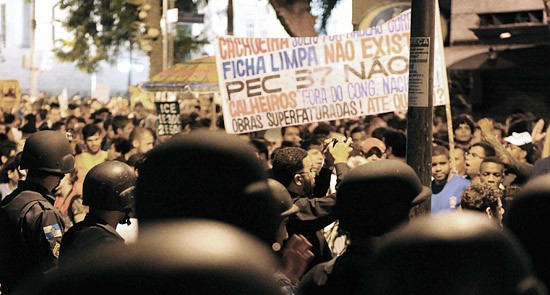 Protesters in Brazil have already achieved their aims, but they are not likely to stop. The streets are their stage, and their demands are being met; surely this is a movement. The numbers of people taking to the streets is multiplying in over 10 state capitals and 100 cities throughout Brazil. The streets have not been so full of protesters since the impeachment of ex-president Fernando Collor de Mello 20 years ago. But these protesters don’t want the president out.

In a video of one of the first demonstrations in Brasilia, civilians surrounded the Palace of the Government, where the president’s office is located, to make it clear that the fight was bigger than the bus fare increase which helped catalyse the protests. “We will only stop when we have … 20 million people here to tell them that it’s not right what they do with our money, with our health and our education!” they chanted. True to their word, the protesters have not stopped.

Reasons they have to spare. Public school education is poor, and despite public universities being the best in the country, the only way lecturers receive pay rises is by going on strike, which can take months away from students’ education.

The protests started peacefully as a long walk in the city by the millions announcing the Brazilian spring and later turned into civilians taking to the streets prepared for war, with vinegar and extra T-shirts to tie around their faces to minimise the damage in case the military police used gas bombs.

The national media at first focused on the “havoc” and “looting”, calling the protesters “troublemakers” and “vandals”. But demonstrators in the streets said that was far from reality, and added the main televised media, O Globo, to their list of targets.

MP Cristovam Buarque stood up for the demonstrators in Parliament:

“We don’t have violent youth; we have a violent system. The vandalism of breaking a window, though we shouldn’t accept nor recommend, is much smaller than the vandalism made toward the lives of the Brazilians. Children dying for shortage of intensive care units — that’s vandalism!”

In the south-eastern capital of Belo Horizonte, Dr Giovano Iannotti reported police violence and infiltration at the Saturday protest. When he tried to cross the police barricade to help a wounded man, he was stopped. “I identified myself as a doctor to the policemen and said I could help the man. Their response was a gun pointed to my chest. I asked to speak to an officer, but they began shooting [rubber bullets] again,” he recounted to O Vermelho. A public commission investigating police brutality has already received over 1500 reports.

Although political corruption is at the core motives of the demonstrations, money is also a factor. The Economist reported just a week before the protests began that Brazil’s GDP increase had slowed down considerably the past few years, while inflation remained steady between 5% and 6%. People have money, but not enough to compete with the high prices.

Protesters’ demands are being heard. In two states the bus fare increase was retracted, and this week Parliament voted against an amendment that would have limited investigation into police corruption.

In a national broadcast, President Dilma Rousseff proposed five broad solutions, including $24 billion to invest in public transport. A referendum for political reform is being discussed to tackle endemic corruption at the highest government spheres, with emphasis on transparency of public expenditures and accountability.

Thanks, finally a report thats more than govt press releases.