News Corp will split into two companies on Sunday in an historic media moment. That and other media tidbits.

The end of News Ltd. All right-thinking people will of course pause somewhere in Australia today, at a time of their choosing, for a moment to remember the passing of an old friend — News Ltd. Especially reflective will be all those employees at The Australian contemplating their chances in the new round of redundancies — and those shunted in the recent cuts following Rupert Murdoch’s most recent foray Down Under. Yes, News Ltd, which was founded in 1922, bites the dust, 91 years later, thanks to ambitions of the son of the founder — Keith Rupert Murdoch, 82, to live forever in thought and deed.

This the Australian and UK operations rebranded as News Corp Australia and News UK (which is not new, but the name of a rarely used subsidiary). No name change for the US business (could he really impose that sort of change in the US on a paper as venerable as The Wall Street Journal?). Both changes apply from Monday after the split in the parent company.

It’s an important day for the media. From Monday we will get accurate share prices for the publishing-based News Corp and the fat, profitable content rump, 21st Century Fox. Perhaps the ASX will summon some courage and request that the publishing arm provide far more information about its individual operations in Australia, the UK and the US. But the new publishing arm will still be a Murdochian organisation — he will remain executive chairman, snaffling at least $US5 million a year for his troubles. — Glenn Dyer

Rudd v Abbott? Yes. Via MasterChef Julie Goodwin, we’re not sure who should take heart from this phone poll by Channel Seven today … 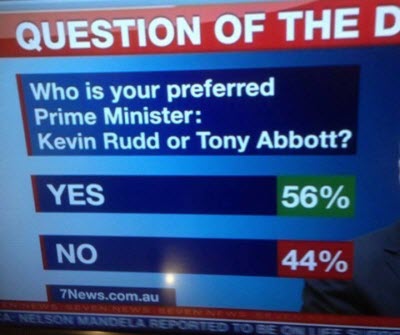 Amazing Grace. Australian Financial Review columnist Grace Collier had one hellava time on Wednesday night as she watched the Labor leadership drama unfold. One Twitter user has compiled a timeline of Collier’s tweets from that night …

Collier has now locked her Twitter account so only select followers can read her musings. Wonder why …

Front page of the day. South Africa watches. And waits … 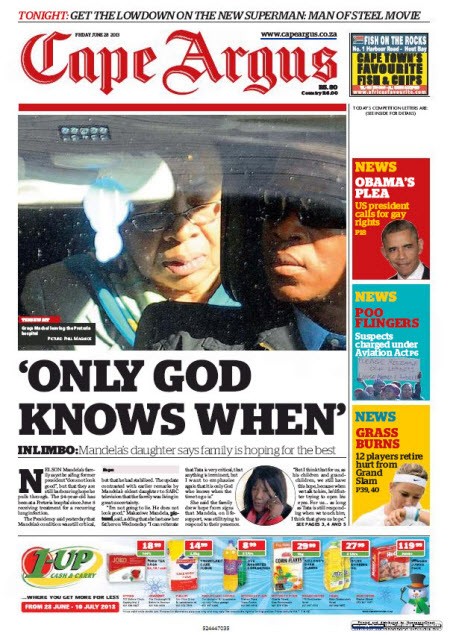 The Seven Network phone poll is a telling reflection of their viewer base. Not even I suspected they were that thick.

This is Collier of “I’m not Right” fame – proving once again how Right she is – on two counts?

…. And someone pays the dim-wit for her opinions?

Grace Collier one of the incredible tits that works for the Fin Review that shitty rag of no consequence.