‘I’m sorry for my neighbour’: the man behind those bizarre ads

It was the ad that bewildered readers across Australia -- who is Kevin De Arbrew? What were these racist comments? Crikey intern Bension Siebert found out the story behind the ad.

A bizarre advertisement that appeared in some of the country’s largest daily newspapers on Tuesday was the result of an equally bizarre neighbourhood dispute in central Melbourne, Crikey can reveal.

Melburnian Kevin De Arbrew commissioned ads in the Adelaide Advertiser (page 10), the Herald Sun (page 5) and The Sydney Morning Herald (classifieds) apologising for “racist comments” he made in 2004. De Arbrew  also says he placed it in Hobart’s Mercury, but the paper has no record of it … 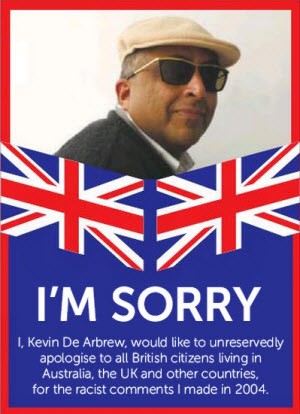 But despite telling thousands of Australians over their morning cornflakes he made racist comments against Britons in 2004, De Arbrew says he never actually made any such comments. He told Crikey he borrowed $10,000 to buy the ads in order to counter a former neighbour’s racist media campaign that was conducted under De Arbrew’s name.

“What that mad man did … was to do with the British, so all the British people living here, especially the young ones, come and help themselves,” he said. “What I’m suspecting is that that these people are being aided and abetted by the police … They turn off the bloody electricity and just walk in!”

But De Arbrew says he bears British nationals no ill will. “I love British people … I listen to The Rolling Stones and The Doors and The Who on my computer.”

De Arbrew says he bought the ad space in an attempt to stop the looting. Asked why he chose newspapers in Adelaide and Sydney (and, he says, in Tasmania) for his ads, he said: “I just thought to sort of clarify the air around me, around Victoria if you know what I mean.”

The feud between Arbrew and his neighbour began in early 2004 when “Sam” allegedly backed into De Arbrew’s Land Cruiser.

bizarre.. the doors were from LA

what a truly bizarre tale