Asylum seeker policy under Rudd: what should he do?

One of Kevin Rudd's greatest policy challenges is the treatment of asylum seekers. We ask immigration experts what the new PM should do on this vexed issue. 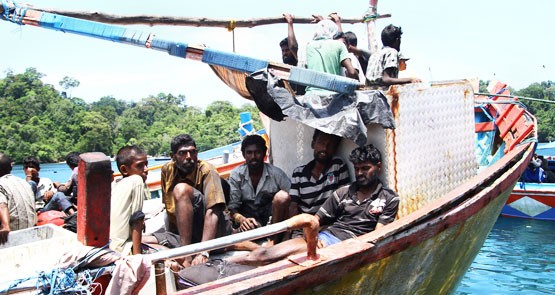 Immigration experts are offering up two pieces of asylum seeker policy advice for new PM Kevin Rudd: abandon the “no advantage” test and focus on a regional solution.

Labor MP Laurie Ferguson declared earlier this month that Labor would be “dead” in Western Sydney if the asylum seeker issue wasn’t dealt with. It’s clearly one of Rudd’s major policy challenges. So what should he do?

“The concept of ‘no advantage’ has been very destructive,” Gillian Triggs, president of the Human Rights Commission, told Crikey. The “no advantage” principle comes from the Houston report and means that no asylum seeker arriving by boat is processed any quicker than an asylum seeker who remains in Indonesia or Malaysia to have their application processed. However, there is no set guideline of exactly what this means or how long asylum seekers will wait in limbo. Triggs notes that no asylum seeker has been processed since the Houston report was implemented last year, meaning there’s now a backlog of over 20,000 claims.

Triggs points out the “no advantage” concept may breach international law by not allowing asylum seekers the right to work or to have their asylum status determined. “Mr Rudd understands the international legal principles, and he knows of the failure of the current policies in terms of delivering humane outcomes,” said Triggs.

Lawyer David Manne, executive director of the Refugee and Immigration Legal Centre, also calls for the policy concept to end. “It has created a profound collective confusion throughout government and non-government sectors, and at a fundamental level, left refugee policy, procedure and practice in a state of crisis,” he told Crikey.

The first hint of a change in asylum seeker policy under a Rudd government came when Foreign Minister Bob Carr queried the genuineness of asylum seekers arriving by boat on Lateline just hours after Rudd’s return — declaring many of them “economic migrants”. He said stronger tests were required to validate refugee status:

“Yeah, we’ve reached the view that as a result of court and tribunal decisions, it’s coming up wrong. We need a tougher, more hard-edged assessment.”

Manne called the Foreign Minister’s comments “very unfortunate”, noting Australia has had a refugee determination system for many years that uses legal principles and evidence to make decisions about which people need protection from persecution and which don’t.

“It would be quite wrong and contrary to the facts to assert that most people coming here are so called ‘economic migrants’, when in fact we have different groups coming to Australia in different ways,” he told Crikey.

“We’re doing it according to a standard that is set under international law and being applied in every other country,” she said. “We’re not out on a limb here. It’s not as if we have a higher acceptance rate than anywhere else in the world.”

Crock acknowledges that some asylum seekers may indeed be economic migrants. “What’s wrong with our system though is that if you process them and found that out, you could send them back, or try to send them back. But we’re not even doing that, we’re giving them five free years passage to Australia by not processing them. If he’s serious about this, then drop the no-advantage test,” she said.

Regardless of Carr, a complete revamp of asylum seeker policy remains unlikely. New Treasurer Chris Bowen was quizzed on Nine’s Today this morning about asylum seeker policy and he noted Labor’s current focus on a regional solution — much of which was recommended in the Houston report last year, and still remains to be properly implemented. Rudd will head off to Indonesia next week and how to handle people smugglers and an increase in asylum seekers arriving by boat are expected to be raised.

A regional solution is the best move forward, experts tell Crikey. “I think that this is an opportunity now to work at the regional level to better respond to the needs of asylum seekers to protect them and ensure that they’re not coming by boat,” said Triggs.

Rudd may have focused more on the domestic side of asylum seeker policy during his first term as PM, but he’s well-suited for a regional solution. “Rudd is going to Indonesia, he has experience as a diplomat, he understands the legal principles and I think he understands the need to work respectfully with all our neighbours,” added Triggs.

A regional solution means fewer boats packed with asylum seekers because they don’t feel compelled to take further risks to get to safety, says Manne. “It’s crucial that the Rudd government works strenuously with our regional partners to develop better protection systems for people so that they have safer ways of accessing protection from further harm.”

There can not be a regional solution because the frigging cause if not regional and we are the only convention country in the region.

Regional means, don’t come to Australia, that is all it means.

If it is to be regional and we are the only nation interested does that mean we assess all 8 million refugees in the region?

How about we all stop the fucking whining and understand that the right to seek asylum is precisely and exactly what is says.

Marilyn – your passion is laudable but your perspicacity is not.
Please think about how a true refugee (ie, fleeing life threatening persecution, ethnic cleansing, theocratic bigots and/or Hegemon housekeeping) manages (1)a passport – imagine a Hazara fronting the p/p office in Kabul, presided over by a Dari or other fazir speaking bribe seeker, (2)anyone from anywhere under “persecution” getting the airfare, then making it to the plane, fartarsing about in Indonesia to get from Jakarta to the south coast, or usually to Bali (more bribes), then stumping up US$10K ppfor the leaky boat.
The only honest & honourable solution is to fund UNHCR camps in transit countries (after putting the hard word on SBY) anywhere except Indonesia which sees the trade as a source of hard currency.

Yes, let’s hope the no advantage test dies. Without the expensive prolonged off-shore processing there would be money to do things that may actually work

Manne can be relied on to allow no evidence whatsoever to shift his utopian view about the motivations and source of most asylum seekers.

Something the vast majority of Australians have worked out a long time ago and Bob Carr has finally admitted isn’t going to sway the refugee lobby one centimetre towards the truth.

I agree with Marilyn; we have obligations under the UN refugee convention. As they are being systematically rorted by industrial level people smuggling, we should withdraw from the convention, just like all the other sensible countries in our region.

I don’t think it’s any good to get angry with people who are misinformed Marilyn. I do think it’s right to get angry at our mainstream press.
You have to ask how so many can be completely ignorant of the subject yet still happy to offer an opinion. It’s because people believe they have been informed about the facts and to me that’s a clear failure of our mainstream media. On this subject alone not only does our reputation suffer internationally because of their failure we suffer a financial penalty as well through lost investment, and what happens to journalists and their employers who have ultimately spread confusing incomplete and hence derelict information… absolutely nothing.
Until the Australian public is given access to competent and accurate media, from a trusted media source then you will always be frustrated by peoples stupid and ignorant opinions.
In the 80’s the “Tass” news agency was seen as a despicable tool of the Communist regime of Russia, to my mind we have something almost the same, the only difference been that our media serves different masters