Small cap investors: stand by for a post-election rally

Politicians aren’t the only ones that should be getting pumped up for the federal election. If anything, equity investors should be more excited, particularly those in small caps. The perception is based on the optimistic belief many people have about improved market conditions once the current political uncertainty is resolved.

I’ll put this theory to the test, but I stress this isn’t a call on which political party is better for our market. A number of studies done here and in the US show that neither left- nor right-leaning politicians have much statistical impact on performance. The argument is that it is the stability and predictability of government policies that companies and markets crave, and Australia will get that (at least on a relative basis) once the election is over — no matter who becomes prime minister.

The chief executive of travel agency chain Flight Centre, Graham Turner, was the latest business leader to comment on the election when he said he expected consumer confidence to rebound after September (based on a September 14 federal election). The theory makes sense, but where the rubber meets the road is the question of whether investors should be holding their breath for an after-election party.

Looking at elections over the past two decades, the answer seems to be a definitive “yes”. In fact, the post-election rally is one of the most predictable events on equity markets — even rivalling the popular “Santa Rally” (which is a market phenomenon where stocks outperform in the weeks before Christmas and into January).

There’s only one federal election in the past 20 years where the S&P/ASX Small Ordinaries Index did not generate a positive return in the three- and six-month period after the ballots were counted, and that was because any potential rally was rear-ended by the global financial crisis following the “Kevin 07” campaign win.

Unless another global shock strikes out of left field, the September 14 election is likely to trigger a “further for longer” run in small cap stocks over their bigger rivals. 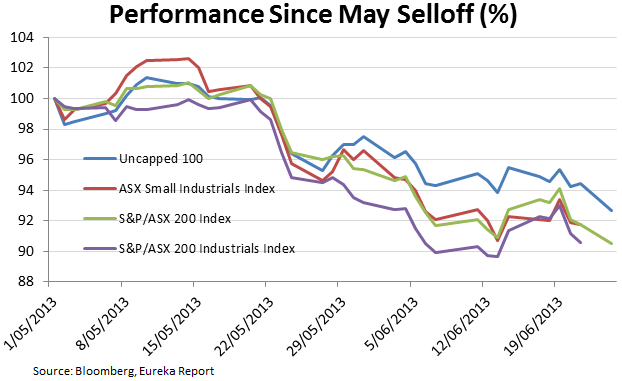 It may surprise you, but the Uncapped 100 stocks have been quietly outperforming the large caps since the sell-off in May. The broader small cap index has too, if you exclude deeply out-of-favour junior resource stocks.

While any post-election rally will also see large cap stocks run hard for up to six months, their performance has historically paled in comparison to small caps. *Read the rest of this article at Eureka Report