It's fitting that Tony Windsor and Rob Oakeshott leave politics together. Their careers have followed very similar trajectories. 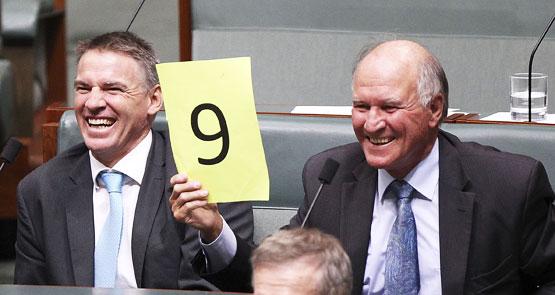 Tony Windsor began and ends his political career with hung parliaments. He was elected as an independent to the New South Wales Parliament in 1991, at the same election that reduced Nick Greiner, remarkably, to a minority government. As for why Windsor was an independent, rather than the Nationals MP he originally was a candidate to become, you can ask the NSW Nationals. As they would learn repeatedly over the ensuing two decades, you mess with Tony Windsor at your peril.

Greiner himself didn’t last much longer after the Metherell affair. But the Greiner-Fahey government, despite its minority status, ran full term, with Windsor’s support — demonstrating that hung parliaments can be stable and deliver outcomes. Bob Carr only narrowly won power in 1995.

Windsor, knowingly or not, created a brand — the independent who saw how much for granted the Nationals, particularly in NSW, took the bush, and offered an alternative. He held his seat in 1995, again in 1999, and then in 2001 tried for a federal seat. And not just any federal seat, but New England, Nationals heartland and the one-time kingdom of Nats leader Ian Sinclair. Windsor handily defeated Sinclair’s successor, Stuart St Clair. Six years before, Peter Andren had entered politics and seized Calare from the Nationals.

Rob Oakeshott was to match Windsor’s achievement, though not his longevity. Oakeshott had a longer heritage within the Nationals, having worked for future leader Mark Vaile, being elected in 1996, and earning a shadow ministry after 1999. Oakeshott seemed a fresh, young, different face for the Nats. But in 2002 he walked, unhappy about the party’s social conservatism. Like Windsor, Oakeshott build up his vote in his state seat, winning in 2003 and 2007, aided by Bob Carr’s canny co-operation in delivering funding for his seat.

Neither garnered much attention until the 2010 election thrust them into public consciousness. Windsor and Oakeshott worked with Bob Katter — yet another former Nat (indeed, a former Joh Bjelke-Petersen minister, no less) in the negotiations with Julia Gillard and Tony Abbott. It was to Windsor that Abbott made his infamous comment that the only thing he wouldn’t do to be prime minister was sell his arse.

But delivering support to Labor was the easy part — for the all the bile and hatred directed at them ever since by conservatives. Windsor and Oakeshott, along with the other independents and Greens MP Adam Bandt, became the crucial votes for passage of any contested legislation through the House of Representatives, placing a huge burden of work on them to be across every controversial issue. Only last night, Windsor was locked in discussions over the fate of the government’s 457 visa bill, trying to find a solution to what he says are abuses of the system, albeit not on the scale claimed by the government, but without imposing burdens on business.

For much of the last three years, Windsor and Oakeshott have looked like the only adults in Parliament — particularly Windsor, who always seemed to take seriously the stuff that needed to be taken seriously but knew that most of the rest was nonsense. Windsor also had a healthy scepticism of the media, deriding the pretensions of News Ltd, which openly declared war on Oakeshott, and noting the inability of press gallery journalists to cope with the idea of a hung parliament and the scary idea that legislation might actually be debated, negotiated and amended rather than being rubber-stamped by Parliament.

After all that, it’s actually fitting both will go out of politics together. Oakeshott was facing defeat at the hands of his former party in Lyne. Windsor would have seen off the threat of Barnaby Joyce, whose crass populism is less appealing to the gentry of New England than to Queenslanders; Joyce, who was facing the end of his political career in September, must be overjoyed his path to the deputy prime ministership is now open again. “The world is run by those that turn up,” Windsor said this morning. If Windsor had stood again, it would have been 25 years in parliaments. As they say in the classics, you get less for murder.

Both are proud of their achievements in this term of Parliament; both readily admit they could have done better, particularly on asylum seekers. Apart from anything else, with their departure goes some much-needed candour from MPs who never stuck to talking points in explaining themselves or their policies; indeed, they never even had talking points to stick to. Who knows, we might get lucky and see their example rub off on some of those left behind.

Vale Tony Windsor the nation’s best politician; Guy Fawkes without the gunpowder. I salute you sir.
I hope that future federal elections are not on a fixed date. This alone has created the ridiculous media-abhorring-a-vacuum which has resulted in the most asinine amateurism in the MSM.
As a journslist, I am ashamed at the dismal quality of what has purported to be impartial journalism these last three years.
And no: you are not reflecting the populace; many like me have simply walked away in disgust, not to mention being unwilling to put up with the denigration should one dare to constructively blog (or try) on a News or Fairfax story website.
Let’s hope the next election on the agenda is of the Canberra Press Gallery

That Tony Windsor and Rob Oakeshott were ever members of the Nats is surprising. That they left was sanity. That they are leaving politics is a tragedy. Now the MSM will have a field day.

Is there any provision in our ballot papers to vote for the Party of our choice. Eg voting for an animal in the capital city’s Zoo-if they have one.

Good article and history on the dysfunctional nature of the 2 party preferred Westminster system.

The irony is that Bernard himself, while critiquing the notion of a 2 party preferred system with some independents thrown in, and particularly critiques ‘stupid’ journalists who can’t get used to any variation on the theme, calls it a ‘hung Parliament’, when in fact it is, for the first time, a more pluralistic Parliament, or a more representative Parliament, as a better name. This goes to the very heart of pol sci critiques of how representative or direct democracy should work. Can you imagine a Parliament made up of clusters of smaller parties in a representative proportional voting system for the lower house where a true majority of small parties representing community interests have to agree on the wording in order to get legislation through? However, no-one in the press gallery, Bernard included, seems to have done any pol sci at uni. Very mysterious.

Such a pity for so many reasons, the least of which was likely to have been the only bright spot of the election – watching Windsor give Barney Rubble the towelling up he so richly deserves.
Now, post Sept 14, the only joy will be watching the sanctimonious Wilkie parading about in the top hat of relevance deprived.