‘Minerals Week’ in a realm of industry rentseeking

The rentseekers and whingers of the mining industry gather in Canberra this week. But you can be sure that there are a few topics that won't be mentioned, write Glenn Dyer and Bernard Keane. 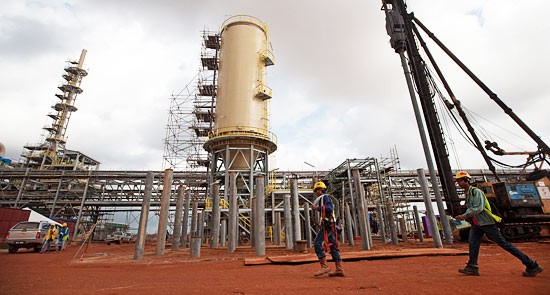 It’s talkfest time in Canberra with this week. The Committee for the Economic Development of Australia had some high-profile speakers, including the PM and shadow treasurer Joe Hockey, and the talk there was of recession or, as far as Prime Minister Julia Gillard was concerned, no recession.

Gillard needn’t be worried; there’s not enough time for a recession on the remaining days of her watch. She’ll make it through as one of our most economically successful leaders, with growth, low unemployment, an investment boom, low inflation, low interest rates and a gold-plated credit rating.

And this week brings the country’s biggest annual whingefest, Minerals Week, being held just down the road from Parliament House and just around the corner from the Minerals Council headquarters, at Hotel Realm. Canberrans will recall that used to be the site for the Macquarie Hostel, the last word in cheap’n’cheerful Canberra accommodation, where many a visiting politician was to be found — even Andrew Peacock’s Gucci luggage was often spotted in the decidedly unsalubrious confines of the Macquarie.

Hotel Realm is rather more upmarket than its predecessor, and today mining executives in their hundreds this week will be shuffling their well-fed frames around its well-appointed corridors. Tonight is Minerals Week centerpiece, the Australian Minerals Industry Parliamentary dinner, which the Prime Minister will address, assuming she’s still Prime Minister.

Inside Hotel Realm will be a Bizarro World where the Australian economy is permanently on the brink of destruction at the hands of socialists, and its would-be saviour, the mining industry, is being thwarted by a long list of crises. Minerals Council functions in the past three years have featured the high dollar, government debt, high costs, poor productivity and especially that old standby of the demagogues in the industry — “sovereign risk” .

This week we can expect to hear plenty of harping about costs, including suggestions that labour costs are too high (lest we forget Gina Rinehart’s happy Africans who are glad to work for $2 a day), government red and green tape too restrictive and the carbon price too high.

Manning the megaphone of moans will be the industry mouthpieces, The Australian and The Australian Financial Review. Their writers (with special mention to Annabel Hepworth on The Oz and formerly of The AFR, where hubby Brett Clegg is the CEO) have been willing retailers of every whinge and whine from the business sector, especially the BCA and the Mining Industry Council on issues like the mining tax and labour costs.

From the outside, however, this will look a lot more like an assemblage of rentseekers and whiners who want to blame everyone else but themselves for their problems.

Newcrest Mining is a sponsor of Minerals Week. Newcrest has recently written off $6 billion of its assets — but run into some disclosure problems with the ASX and the slowcoaches at ASIC, now the single biggest joke in Australian regulation.

Mining CEOs talking today include Mark Cutifani, CEO of the slow-moving Anglo American group, which has its own set of problems in South Africa that make Australia look like a safe haven, and Greg Boyce, CEO of Peabody Energy of the US, which overpaid — $4.9 billion — in late 2011 for Macarthur Coal in Queensland.

“Both Mongolia and Simandou have generated far more sovereign risk for Rio and its shareholders than anything in Australia. You wouldn’t know it from the deafening silence …”

Another high-profile visitor is Sam Walsh, Rio Tinto’s newish CEO and a former WA iron ore boss. Rio Tinto has long loved to complain about sovereign risk. Virtually anything the company didn’t like was slammed as “sovereign risk”, a claim eagerly picked up by another attendee at this week’s frolic, Opposition Leader Tony Abbott, who notoriously claimed that investors should be putting their mining money in the likes of Zambia rather than Australia. Since then, Australia has been rated the world’s best destination for mining investment by independent analysts four years running.

And the sovereign risk line was always rather rich coming from Rio’s now-ex CEO Tom Albanese: this career and that of his CFO were wrecked on an adventure in Mozambique that cost of $US3 billion on a $US3.8 billion investment in a coking coal takeover and mine that is close to worthless at current prices. That was on top of a further $US11 billion in writedowns on the great Alcan aluminium debacle that Albanese, with impeccable timing, drove back in 2007 just as the GFC started. That deal loaded Rio up with $US38 billion in debt that has proven to be a millstone (total write downs by Rio since 2008 are around $US30 billion).

But things continue to go bad for Rio even after the departure of Albanese. After years of crying “sovereign risk” every time a Labor government did anything here, it is struggling to avoid the real thing in Mongolia, where it has spent $US6.2 billion bringing a huge copper mine to the brink of production — only to have been twice denied government approval (on June 14 and 21) to start shipments.

This is after Rio Tinto failed to get any progress on its Simandou iron ore prospect in Guinea in West Africa because of government policy changes, concerns about dealings by other companies in another part of the Simandou region and then the slowdown in China and slide in iron ore prices. Rio is trying to start development of Simandou with major Chinese shareholder, Chinalco. Back in 2011 the estimated cost of a 93 million tonne a year mine was $US9 billion. This month Rio estimated the cost at $US20 billion.

Both Mongolia and Simandou have generated far more sovereign risk for Rio and its shareholders than anything in Australia. You wouldn’t know it from the deafening silence from Rio and its managers on events in both countries.

And this week Rio bowed to the inevitable and pulled the sale of its diamond business from the market — the company has been looking for around $1.9 billion. No one wanted to pay what Rio wanted — bottom-feeders kicked the tyres, but couldn’t find any value. No sovereign risk here, just investment risk for the buyer and the high chance of buyer’s remorse (a feeling that Rio knows only too well).

And the Alcan deal and slide in the world aluminium market continues to batter the Rio balance sheet, with the June 30 half-year balance date approaching. In a report earlier this month in New Zealand, Rio revealed a huge writedown in the value of the Tiwai Point aluminium smelter. Rio wrote down the smelter value to $14.8 million from $606.9 million in the accounts for Rio Tinto Alcan NZ, which owns 79% of the operation — a Japanese company owns the other 21%. Tiwai is in the group of old Comalco and Alcan aluminium, bauxite and alumina assets that the company has been trying to sell for nearly two years, with no success.

Walsh is trying to cut $US5 billion in costs from the company’s operations, but failure to sell the aluminium and diamonds businesses means he is behind the schedule. Maybe it’s time to select a friendly ear at The AFR or The Oz and complain about cost problems in Australia, labour regulations, the need for industrial relations reform, lower wages, an end to green tape and red tape. If we’re lucky, Walsh will throw in a reference to sovereign risk? Play it again, Sam … again and again.

The Minerals Council have been an effective lobby group-and a wage probably twice the prime ministers should and does buy some polished hard-arses. But these clowns and their media toadies at Murdoch press and Macquarie broadcasters (Jones et al) would sell their grandmother,and in this case, have already sold their grandchildren out, before acknowledging the responsibility that comes with authority. The Minerals Council is all of us- the Whole Community, not just the CEO club, shadowy international corporate interests (google Glencore and its Iraq history)) and the few trickle- down beneficiaries of cashed up Bogans and their temporary windfall jobs. An opportunity to pay a fair share of the profit to help build the infrastructure of this country was torpedoed by these selfish traitorious bastards and dressed up as hard yakka patriotism. Australia’s resources are the birthright and heritage of future generations and the Minerals Council are the sell- out lowlifes of our time.