Remember the NSA? Snooping is the real story

Everyone now has an easy-to-follow narrative chasing Edward Snowden around the world. But we've lost sight of the fundamental issues: the NSA's vast surveillance program 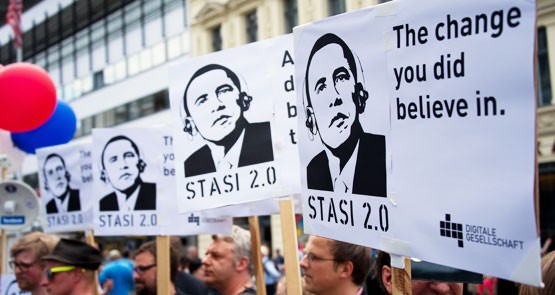 Politicians, spooks and technology companies across the Five Eyes nations must be relieved. The Edward Snowden story has morphed into a simple hunt-the-fugitive narrative, with the added farce of the media being stuck on an 11-hour booze-free flight to Cuba — without any hard evidence that Snowden was ever in Moscow to begin with.

Bravo. If WikiLeaks really does have its hand in this, then it’s an own goal. Everyone gets distracted by the global game of Where’s Eddie?, laughs at hapless journos, and giggles at Hong Kong giving America the middle finger, without having to address the real issues because they’re just too damn hard.

It’s not merely that we’re discovering that the NSA and friends have been dramatically extending their surveillance of global communications, and that of their own nations’ citizens, in ways that even Britain’s domestic security agency MI5 found alarming — although that in itself is a massive story. It’s that apart from a handful of noisy ferals — and I suppose I count myself among them — no one seems to care about this.

Or about the vast, relentless and essentially identical hoarding of personal data by all manner of commercial organisations. Or the fact that no one seems to understand how any of this works, or how it will affect human society — least of all the political leaders who are supposed to make decisions on our behalf, or the media that’s supposed to keep us informed.

This is all a bit of a problem.

Take, for example, the news that users are supposedly flocking to Duck Duck Go, a search engine that doesn’t track you and so, unlike Google, there’s nothing to hand the NSA. Flocking, they say. Get it?

Well, Duck Duck Go certainly experienced a traffic surge of more than 400%, to more than 2.5 million searches a day. But when you put that into the context of Google’s 450 million searches per day, as Danny Sullivan did at Search Engine Land, it’s a different picture. Sullivan wrote:

“It’s pretty clear from Duck Duck Go’s figures that hundreds of millions of people haven’t left Google for it. Tens of millions haven’t. Maybe, at best, one million have. Having covered the search engine space for 17 years now, having seen the privacy flare-ups come-and-go, I’d be very surprised if this time, it’s somehow going to cause more change than in the past.”

Last week Unisys released research showing that when it comes to mobile apps, for instance, 80% of Australians say that the organisations involved should be responsible for protecting any personal data they collect. This is in line with previous research, in which the majority of Australians said they’d stop doing business with companies that didn’t protect their data. But when there’s yet another privacy oopsie at Facebook or LinkedIn or Sony or wherever, the number of people who actually leave is less than a ripple.

Earlier this year, the Australian government’s chief technical officer John Sheridan told journalists that two-thirds of us understand technology, so please don’t dumb it down. He was talking there about understanding how to use technology — two-thirds of us confidently use things like Facebook regularly — not about understanding how it works. Ask any IT support technician about the latter! Yet in the wake of the NSA revelations, where are the media stories with the diagrams and technical explanation that’d help us learn?

It all seems very different from the Space Age, when daily newspapers had explanations of transfer orbits and ablative shields on the front pages as many say NASA faked the moon landings.

Last year a workshop hosted by the International Association of Privacy Professionals Australia and New Zealand chapter (iappANZ) concluded that the methods used by Facebook and other social networks have become the de facto standard for giving up private information in return for some convenient service, but it’ll take a generation before we know how this great social experiment turns out.

It strikes me that we should all learn a bit more about what’s going on here — especially those who purport to be our leaders.

Canadian senior information security consultant James Arlen agrees. “We’re at a real tipping point,” he said on a recent Liquidmatrix Security Digest podcast. “It is no longer reasonable for a legislator to be ignorant of technology. It’s kinda funny to poke fun at people who can see different countries from their houses and shit like that, [but] you can’t accept that any longer … We expect not just functional literacy, but we expect technological literacy, because this is the world in which we live.”

Arlen says the level of technological literacy needed to understand issues like online communications data retention is very, very high. I concur. But only last week Australia’s attorney-general Mark Dreyfus, the very man in charge of the issue in this country, demonstrated that he doesn’t even know what “online” means.

The other side of politics is no better. Last night the Senate was debating the newly released joint committee on intelligence and security report on, inter alia, data retention. Opposition spokesperson Senator George Brandis didn’t even bother to speak.

Maybe we could all put in a little bit more effort here, guys? Future generations, etc …

To get more than a few people understanding how high tech works is a vain hope, especially when virtually all high tech companies work incredibly hard to hide how their stuff works and even more especially because very few people are interested … they might want to know what stuff does, but rarely how it does what it does. So I’m guessing that snooping will only cause serious concern when innocent people with names and stories are locked up or otherwise hassled. Otherwise it will just be an irrelevant detail just like the other irrelevant details of how stuff works.

For anyone interested in promoting understanding of data collection, here’s something you can actually do (for a few bucks). There’s an award winning online game, Data Dealer, which currently has a Kickstarter campaign running to secure the last leg of funding they need to complete the game. It’s a brilliant, fun game and well worth chipping in for. Check it out at http://www.kickstarter.com/projects/cuteacute/data-dealer

“If WikiLeaks really does have its hand in this, then it’s an own goal.”

Errr, if potential whistleblowers know Wikileaks will help them out, then they are more likely to step forward? Good for Wikileaks I’d say.

@Geoff Powell Russell – “So I’m guessing that snooping will only cause serious concern when innocent people with names and stories are locked up or otherwise hassled.”

i suspect it won’t even matter then. all’s required is a mass media beat up/smear campaign and you can turn even the purest of souls into the devil. after all, “if they weren’t doing anything wrong why’d the get caught?”

“It’s getting to the point you don’t have to have done anything wrong, you simply have to have eventually fall under suspicion from somebody, even by a wrong call, and then they can use this system to go back in time and scrutinise every decision you’ve ever made, every friend you’ve ever discussed something with and attack you on that basis to sort of derive suspicion from an innocent life and paint anyone in the context of a wrong-doer”