MP valedictories: wish them well as we wave them goodbye

MPs from across the political spectrum sum up years of experiences in federal Parliament as they give their valedictory speeches. Crikey intern Bension Siebert collates excerpts from their farewells. As the sometimes turbulent 43rd federal Parliament comes to an end this week, so too do the political careers of 22 MPs retiring at the 2013 election. Some have given their valedictory speeches to Parliament recently — we bring you excerpts from each …

“But when we talk about leadership, we — especially those of us on this side of the place — owe it to the people we represent to remember that we are here collectively. There is an onus on us to show collective leadership, to be proud of those things we have achieved, to take ownership of those things we have achieved and to ensure that they are explained — because we are one. United we stand; divided we fall. That is clear …

“Do not mourn for me about anything that happened to me earlier in this Parliament. I have been around politics long enough. I knew that some other possibilities were inevitable. I accept responsibility. I signed the resignation as speaker.”

“We have a capable, tough, smart, determined woman as our Prime Minister, yet she has been subjected to some of the most crass, silly, petty, s-xist and just plain rude behaviour for years …

“It really is time for people to understand how corrosive s-xism is, to acknowledge that it deliberately sets out to diminish authority and sideline the real issues, and to realise how constantly s-xualising women disempowers them and how extreme and violent language can turn into or encourage violent and dangerous behaviour.”

“I must say something about the worst day of my Senate career, which in fact was not in January this year but the announcement of the Northern Territory intervention. To move into people’s lives and communities in this way left me speechless and helpless.”

“I remain stridently opposed to indefinite mandatory detention and the continued detention of children, 2000 of whom are currently in detention under our management. These practices have gone on in our name and will stand as a matter of great shame …

“600,000 children are living below the poverty line in Australia today. In some parts of the electorate of Pearce, the impact is devastating. Why have we not been able to do better?”

“The use of some illicit drugs needs to be decriminalised. The use of some should change. We are losing too many of our young people because they are seen as criminals and, as a result, do not seek medical help. They are convicted of drug crimes rather than being helped with underlying causes.”

“I, a lone male, had just gatecrashed a country pap-smear clinic. Margaret says I never learn, but let it be said that Paul Neville went literally everywhere for a vote.”

“I am very proud to be the first person who came to this country as a refugee to be elected to this Parliament.”

“If I had had a little longer in the role of attorney-general — and I must say I did want a little longer — there were several things I would have liked to have finished.”

“I happily handed over my life to my branch members and then to my constituents for so many years and it felt like I was letting them down every time I chose to spend time with my family.”

“Naturally I would have liked to have served on the front bench, in opposition or in government, administering a portfolio, but that was not to be. I had to defend some very narrow margins in the Bendigo electorate, especially during the early years, and I could not see any point in being away from the electorate to the extent required to manage a portfolio and then losing the seat as a result.”

Harry Jenkins’ resignation: he has his reasons 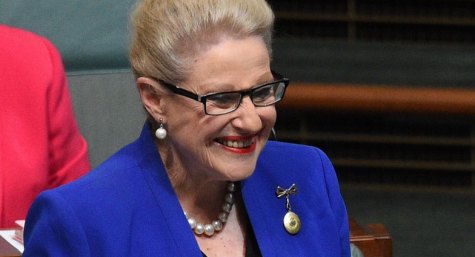 Tears, jeers and parting shots as Bronwyn and other MPs say goodbye

So where does “in your cups” and leaking all over Scullion rank for Crossin?

I am looking forward to many other time serving politicians getting their DCMs in September! Edward James

The tyranny of age?
Remember that old ad “The Canetoad, often licked, but never voted for!”?
But for some reason, I’m having flashes of frosty boys and drum sticks?

I saw the disgraceful performance by Crossin at her farewell speech.

She had a job for 15 years. It was well paid. It provided excellent superannuation. There wasn’t any quarterly performance reviews. A million Australians would probably think that she had an excellent job. But “no”! She wants to have the job for the rest of her life.