It's the last sitting week before the federal election -- so should Parliament rush through a slew of outstanding bills? We take a look at some of the bills waiting in the legislative queue. 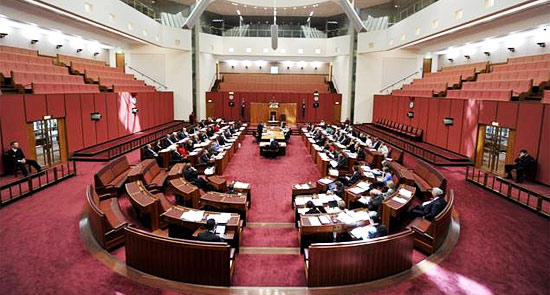 Greens leader Christine Milne has told the Coalition to get out of the way and allow the 43rd Parliament to complete its bulging legislative agenda as the last sitting week before September’s federal election kicks off in Canberra today.

Under a government motion set to be debated in the Senate with Greens support early this afternoon, the states’ house will likely sit until midnight on Thursday and during the day on Friday to plough through 53 pieces of mostly uncontroversial legislation. That would take the total number of laws passed by the minority government to over 600.

Bills set down for debate this week include the Gonski education reforms, restaurant and cafe weekend menu printing exemptions, aged-care reform, Newstart reforms, removing X-rays as a method of determining the age of asylum seekers, recognition for local government in the constitution, and reforms to the arts sector via the Australia Council bills.

The vast majority of bills that come before Parliament are waved through with bipartisan support. Last Thursday for example, the Senate passed 23 bills in less than two hours. And more than half the bills subject to today’s motion would usually be considered non-controversial if it were a normal week. But the government and the Greens have both accused the Coalition of stalling democracy by employing “filibustering” tactics beloved by windbags in the US Congress.

The Coalition claims the opposite — that the Parliament is “ramming through” its agenda with scant regard for informed deliberation. Under this morning’s motion, some pieces of legislation are allocated just 15 minutes for debate.

With a Coalition majority possible in the next Senate, a legislation spree this week would make it more difficult for Tony Abbott to unwind the progress of the minority government when he ascends to the Lodge.

Milne told Crikey that with limited time left before the election the Greens were trying “to get on with the job of delivering outcomes for all Australians … These are outcomes which are at risk under an Abbott government.”

While filibustering is banned in Australia, some Coalition senators have been accused of using delaying tactics, like calling for spurious divisions and trying to suspend standing orders by talking inconsequentially as the chamber clock ticks down.

The draft “Week 5 forward” program for the House of Representatives shows 15 bills and amendments still to pass, including the controversial amendment to the Migration Act closing loopholes around 457 visas, and a bill to widen the interview powers of the Australian Sports Anti-Doping Authority.

The Senate notice paper shows 42 bills listed, with the first order of business today the motion moved by Labor Senator Jacinta Collins to extend sitting hours. Those trailing the priority list include the dead reforms to political party public funding.

What happens if the chamber can’t squeeze everything in? According to the Senate practice and procedures, under standing order 136, government bills still on the notice paper at the conclusion of the Parliament automatically lapse at an election. However, private senators’ bills can be restored at the commencement of the next Parliament through a suspension of standing orders.

A recent high-profile example of lapsed legislation was Labor Senator John Faulkner’s previous public funding reforms that flittered off to the graveyard at the end of the last Parliament after being blocked by the Coalition and Family First senator Steve Fielding.

Aside from legislation, other curios lurking on the Senate notice paper include wacky motions from the likes of conservative Liberal Senator Mathias Cormann from 2011 (“after more than three years in office and a change in Prime Minister, the government still has not found its way and continues to fail to deliver on its commitments to the Australian people”) and a proposed censure motion, also from 2011, from Senator Eric Abetz (“that the Senate censures the government for four years of broken promises, economic mismanagement, wasteful spending, lies, hypocrisy and policy back flips, secret deals, leadership intrigue and incompetence, all of which has eroded the living standards of Australians and their confidence in government”).

One of the criticisms of the minority government — at least from the Coalition — has been the whiff of impermanency and illegitimacy, especially around the Prime Minister. However, as the PM and her deputy have been quick to point out, the legislative outcome, while not always adhering to Rob Oakeshott’s widely mocked “new paradigm”, has certainly silenced the doomsayers who could only envisage parliamentary paralysis.

According to parliamentary monitors, only about 40% of Senate time in the 43rd Parliament has been devoted to the consideration of government legislation.

Yes, for all the talk about 600 bills passed most of them in any parliament are budget and ordinary supply bills and having zero to do with any sort of new law.

No mention of Dreyfus’ worthless whistleblower Bill? Hopefully it has been used to soak up puddles & leaks in the carpark. It was utterly retrograde, forward to the past so no loss.
And to think he was once a respected human rights laywer!