Will anyone care about The Age's extraordinary editorial calling for the Prime Minister to step aside? Plus other political views noted along the way.

Influencing the media. Once upon a time, when newspapers were the important means by which people received information and opinion, politicians would really sweat on the publication of editorials declaring which party was deemed worthy of support.

For Labor, historically, the hopes were usually forlorn. It took nigh on a hundred years from its foundation and a purchase in 1946 by the British Daily Mirror group for the Melbourne Argus to upset the normally unanimous conservative consensus among the capital city dailies. That source of a pro-Labor editorial line did not last long, with the paper disappearing into the grave after being sold to the Herald and Weekly Times in 1957.

There were occasional flirtations Left of centre from Ezra Norton’s various Truths and the Sydney Daily Mirror and the young Rupert Murdoch’s afternoon daily The News in Adelaide, but the mainstream stayed pretty much predictably pro-conservative editorially during my young life, with the exception of the Sydney Morning Herald turning on Sir Robert Menzies in 1961 in a way that caused some excitement in the Labor camp.

It took the Murdoch purchase of the Sydney Daily Telegraph to provide the only other substantial pro-Labor endorsement that I can remember, with a deliciously pro-Labor campaign against Liberal Prime Minister Bill McMahon 1972, which The Australian also joined in.

Only after television had become the predominant source of news for most people did we see major papers embracing anyone other than the Liberal-National coalition. These days the political strategists could not care less what a newspaper says in its largely unread editorial, although the politicians they work for prefer praise to criticism.

With the exception, perhaps, of something as uniquely extraordinary as the Melbourne Age on Saturday, with its pre-election entreaty to PM Julia Gillard to leave the political stage. 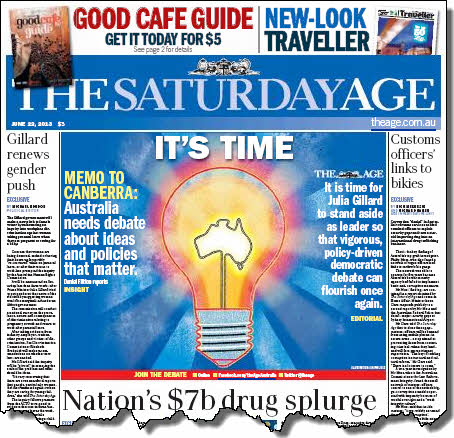 Here it was not the words in the editorial that rocked the Labor camp but the page one placement with its graphic treatment. The spinners and the planners knew it would influence the coverage of the really important media when it comes to public opinion, and the television and radio reacted as they feared. The weekend news services were full of it.

The role of newspapers in modern electioneering is the influence they have on the media that really does influence public opinion.

If you think that these days it is the placement and the picture — not the words — that make a newspaper influential, have a read of the editorial in The Age’s stablemate The Sydney Morning Herald back on June 10. It too argued for Labor to change its leader but, appearing in the normal place for boring editorial opinion, it passed by largely unnoticed.

Worst possible campaign start by Labor. It’s hard to imagine a worse possible start to an election campaign than Labor is enduring as the Parliament staggers to its end. Whoever leads the party come election day will be leading a horribly divided lot of candidates.

Only minor fluctuations in our election indicator, with the probability of a Coalition victory put at about 88% as the new day dawned. Goodness knows what it will be when the market has evaluated Newspoll by the end of the day. When things are going bad. So the polls have sent your candidates into fits of depression. Doom and gloom abounds throughout your party. So what do you do with your campaign strategy? Give the people more of what has not been working. Bring out the kids for a Sunday photo opportunity.

Gonski will be an appropriate epitaph.

Disasters can happen. Just something to keep in mind as we enter an Australian election campaign. Big declines in support can happen. An example from Canada not all that long ago: Heating up the climate change debate. It has taken him a long time, but US President Barack Obama at last seems about to seriously enter the climate change debate. At the weekend the White House took to Twitter to preview a long-awaited climate speech that will come Tuesday afternoon at Georgetown University. The President promised to lay out his vision of “where we need to go, to do what we can to address and prepare for the serious implications of a changing climate” while posting a video calling on “all of us, as citizens, to do our part to preserve God’s creation for future generations — our forests and waterways, our croplands and snowcapped peaks.” The problem with The Age’s editorial was nothing to do with whether or not the Government could or couldn’t win, or even whether or not we the people, or we the Fairfax readers, wanted them to.

It was the base hypocrisy of a major newspaper saying – effectively – we can’t report on policy because you nasty people are distracting us with all this talk of leadership. As though there was a gun at their head.

The Age could do its job, and solve this problem, by doing a thorough analysis of the policies of the major parties. Unfortunately, that doesn’t fit with the tabloid mission of The Age or the SMH.

This Government has many things wrong with it, but a lack of policies is not one of them.

In regards to the decline of the Progressive Conservative vote from 1988 to 1993 one big factor was the near decade of corruption from the PCs in government and the rise of a rival right-wing party ‘Reform’ that split the right vote. In 1993 the two combined for 34.7 percent of the vote and while still a big drop, it was not the demise PCs in Canada that it may at first appear. Indeed the right would have likely been returned at the next election if Canada had preferential voting rather than first past the post.

@rachel
Heartily agree.
There’s nothing new about newspapers being partisan or using editorial to interfere in party politics. Back when newspapers were invented, that was their sole purpose.
Now days we have so few – effective monopolies – that there’s no competing opinion.
Monopolies without the restraint of social responsibility are poison to the very markets they serve.
For the Age to attempt to sack a Prime Minister – having failed to provide the basic standard of reporting regarding that PM’s work in office – is the most grevious hypocracy.
That news outlets such as the ABC were suckered into reporting this editorial as news, just shows that the poison is spreading.

PS. what’s with the cover art???
filament lightbulb, edison screw base….. what fucking century and country are we supposed to be reading this in?
Newspapers ought to be allowed to die with dignity.

Julia Gillard will fail because the Australian People will never vote for a powerless leader. There is nothing she can do that will shut up a Rudd backed by even a quarter of caucus as long as he is supported by a lazy mediocre media.

It is the media who choose to give 100% coverage to rumours and gossip while virtually ignoring the detail of major policies like Gonski.

It is preposterous to claim that they are only repeating gossip. There is always gossip. No ambitious backbencher is going to tell a journalist that to their knowledge nothing is happening. They will intimate that they know something while they try and draw out what the journo knows. That is how they stay in the loop and get the occasional favourable comment.

Eventually it all takes on a life of its own and perception becomes reality. Lazy journalists who can’t or won’t get on top of serious policy join forces with Right Wing shock-jocks to tear her down. Next we have to blame the victim, forget the major reforms and focus on a few petty failures.

I no longer trust Caucus to elect and maintain in office my parties leader.