The Health Minister has approved a new five-star rating system to delineate the nutritional value of food. Crikey intern Joanna Robin chews over the new scheme.

A new five-star rating system to clearly indicate the nutritional value of food has received ministerial approval, and new labels are expected to start appearing midway through next year. The new system will initially be voluntary and covers any packaged, manufactured or processed foods that are presented ready for sale. However, there seem to be a few notable exceptions, with dairy products, high-sugar beverages, confectionery and water determined to be unclassifiable by the star system.

The system is a response to the 2011 Food Labelling Review Report, Labelling Logic, which identified the need for an “interpretive” system and recommended traffic light labelling. The traffic light system was scrapped after strong opposition from industry.

Industry representatives make up part of the technical design working group that has developed the new system. The rest of the group is comprised of experts from public health and consumer groups along with representatives from government.

The labels will use half star increments and a “slider” above the relevant star/half-star, along with the corresponding numbers rating the food.

They will also display nutrient information icons for energy (kilojoules), saturated fat, sodium (salt) and sugars and may also include one positive nutrient such as calcium or fibre (which must meet the Food Standards Code for nutrient content claim). Nutrient information must be presented either as 100g/ml or “per pack”.

How will stars be awarded?

Michael Moore is CEO of the Public Health Association of Australia and acted as co-chair of the technical design working group. He says the methodology (which uses an algorithm to determine the star rating) is based on a combination of Australian dietary guidelines, the Australian Guide to Healthy Eating and on a modified version of nutrient profile scoring criterion (NPSC).

The NPSC was originally developed for the Food Standards Code, specifically to validate health claims made by products. The NPSC takes into account energy, saturated fat, sodium and sugar content and certain ingredients such as fruit and vegetables. In some instances it takes into account dietary fibre and protein. The star system will retain three NPSC categories and add a new sub-category for dairy beverages.

What kinds of ratings are specific foods likely to receive?

According to Dr Greg Gambrill, a member of the working group and Sanitarium’s science and technical manager, a large food sample was used to validate the algorithm that will determine the star ratings and uncover any anomalies. But Gambrill would not say what specific scores are likely to be awarded: “Everyone is waiting to see, until we finish working through the algorithm with additional foods, we can’t really release something that’s not completely finished.”

He says bread, for example, would likely score on the healthy end of things, but there would be a range of scores on display. He explains this would help consumers to quickly evaluate and compare similar products, e.g. a lean cut of meat versus a regular cut. 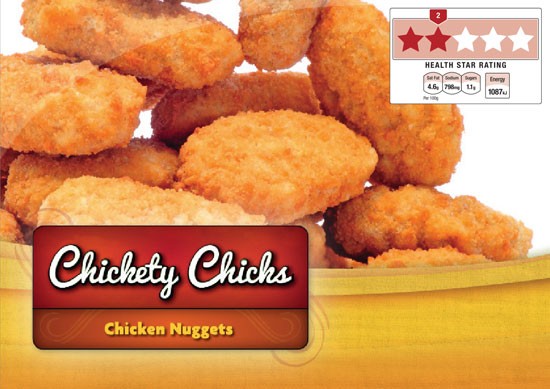 Angela McDougal from CHOICE says some tweaking is still being done. “There’s a commitment on the part of everyone involved to make sure that the nutrient scoring criteria are practical and give consumers reliable information,” she said. For example, water was found to be unclassifiable in the new system, when it scored only half a star. “What we won’t be looking at are manufacturers who think their products should look better. That won’t be an anomaly, that will be the system working exactly how it’s supposed to,” McDougal said.

Moore says the completed algorithm will also be sent out to industry, so companies can plug in the nutritional data of their products and see their values in order to decide whether or not they will adopt the new system.

Will any foods be unrated?

Dairy is the most obvious outlier, because its high lactose (milk sugar) content would cause it to be given a very low nutritional rating under the current framework. Dairy will have its own set of criteria, along with dairy alternatives such as soy milk and almond milk, which is still being developed.

The group determined that sugary drinks and confectionery would continue with the NSPC guidelines currently in place, retaining per gram or per pack percentage of daily intake of energy, which it says are easy for consumers to interpret. Packaged fruits and vegetables (for example, a packet of three colourful capsicums) might be rated, depending on the supermarket.

“[Fruit and vegetable] will be included fairly early in the piece as supermarkets will see the advantage of whole foods, which will no doubt perform very well on the star rating system, and are strongly encouraged in both in the dietary guidelines and the guide to healthy eating,” said Moore.

When will the system be implemented?

Labels should start appearing by this time next year. While it is voluntary, if it’s not widely adopted within two years the new labels are likely to be mandated. However, Moore believes people will “reach for the stars”. “We do understand that price and taste are stronger drivers of decision-making, however the interesting part is that the stars, the system, with nutritional guidelines included, is not very far behind those other two drivers,” he said.

Moore also says a new government in September is unlikely to scrap the scheme.

Big Food on the offensive over labelling

Hummm, can’t see much value here. It seems a dumbing down of an exisiting system, the elephant in the room is, I believe, labels of origin and statements such as “made from local and imported ingredients” which describes anything from bathsoap to a packet of peanuts. I think the majority of comsumers would like to support local producers who should be allowed to genarate some economies of scale. Before we loose anymore primary producers, to overseas conglomerates.

Why can’t we implement the Smilie Face system instead of the star system? Happy and Sad faces for good and bad food respectively. More happy faces the better the food is for you and the more sad faces means you’d be better of eating faeces. Star rating deceptive.