Could Australia outsource asylum seekers across the Tasman?

Despite a lack of boats, New Zealand introduces new laws to deal with asylum seekers. Are they afraid Australia could tell them to keep moving east, writes Klaus Neumann at Inside Story. 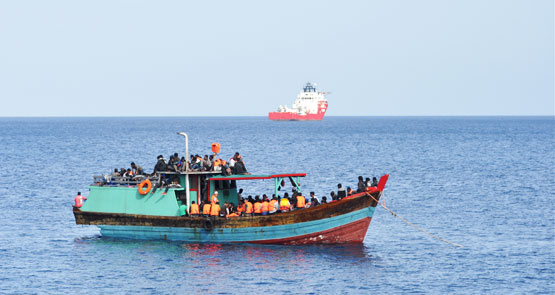 In March this year Germany’s interior ministry alerted state authorities to the arrival of thousands of irregular migrants from Africa. According to the ministry, the Italian government had released the Africans from camps it planned to close, handing each of them a three-month residence permit and 500 euros. The permits allowed the migrants to travel freely among the 26 European countries that have abolished border controls under the Schengen agreement, and most of them appear to have proceeded to Germany. Some had extra assistance from the Italians: a migrant from Togo told La Stampa newspaper he had been given a rail ticket to Munich. Authorities in Hamburg made the Italian practice public in late May, claiming that 300 Africans had ended up in their city alone and reporting that attempts to encourage the migrants to return to Italy (by offering to pay for their travel) had failed.

The Schengen agreement allows Italy to issue residence permits provided the holders have sufficient funds to cover their costs of living for the duration of the permit. By May, the 300 Africans in Hamburg had long since spent their 500 Euros, were homeless, and had to be cared for by Hamburg’s social services when charities weren’t able to provide them with food and accommodation. The European Commission is currently investigating the case.

Because many irregular migrants to Europe make the journey from the North African coast to the Italian island of Lampedusa, Italy has received comparatively large numbers. The migration intensified after Libya’s Muammar Gaddafi was ousted and migrant workers from sub-Saharan Africa became the targets of racial violence. Italy has been responsible for feeding and sheltering the growing number of arrivals, and for processing any applications for political asylum.

Italian authorities have tried before to get rid of irregular migrants by issuing residence permits. In April 2011, when Italy was inundated by refugees from Tunisia in the wake of the Tunisian revolution of late 2010 and early 2011, the permits allowed many of them to take the train to France. Eventually the French stopped the trains at the border in contravention of the Schengen agreement. This technique may be unique, but the practice of passing the buck when it comes to asylum seekers and other unwelcome arrivals is common. French authorities have frequently been accused of not doing enough to prevent irregular migrants from crossing to Britain from Calais or via the Eurotunnel, for example, and in 2002 protests from Britain prompted Nicolas Sarkozy, who was then the French interior minister, to order the closure of the Sangatte refugee camp at Calais.

Australia has occasionally been on the receiving end of a similar practice, although not all attempts — by countries in south-east Asia — were successful. Following the fall of Saigon in April 1975, thousands of refugees fled Vietnam by boat. Those who reached Singapore were reportedly provided with food and water, and given maps that showed them how to make it all the way to Australia. “Fleeing Vietnamese ships may risk voyage to Australia,” a headline in the Australian reported on May 6, 1975. None of them got as far as Australia — it wasn’t until April 26 of the following year that a boat carrying five Indochinese men arrived in Darwin — but the mere prospect of “boat people” arriving in Australia caused much alarm in Canberra. Australia’s foreign minister, Don Willesee, told prime minister Gough Whitlam that he was “concerned that the question of the Vietnamese refugees in Singapore and the ‘spectre of an armada’ sailing for Australia will now become the issue which will most attract public opinion and potentially present the greatest problems”. Whitlam, who didn’t have much time for Vietnamese refugees generally, authorised a policy whereby any “boat people” arriving in Australia would be disembarked “into custody” in order to be able to return them to their boat “for the purpose of departing them from Australia”.

Australia may consider itself blessed because its borders are less porous than those separating Europe from Africa and Asia, or the United States from Central America. But that also means that the authorities can’t easily move people on by putting them on the next train.

If irregular migrants reaching Australia were told to proceed to another country where their asylum claims would be processed, they would most likely be advised to try their luck in New Zealand. So far, though, the Australian government has never encouraged “boat people” to travel across the Tasman Sea under their own steam and seek asylum.

Sending asylum seekers on to New Zealand against their will would be very different to what Italy has been doing. Italy did actually give them (temporary) residence permits: they would have been entitled to stay in Italy if they wanted to. So even if they were genuine refugees Italy wasn’t breaching its obligations under the refugee convention.

It seems to me that no country on earth wants to be seen as having open borders and I’ve yet to see one country that gives refugees a free ride as Australia does and turns them into welfare recipients , It’s obvious to me that refugees will land on our shores in their thousands and we are powerless to stop them , For this reason they must be put to work the day their feet touch dry land , We have half a country to our north in desperate need of workers , ‘Works for me’. We’re headed that way anyway.