The ABC found there was nothing in Mike Carlton's complaint that Australian Story had recruited him into Ray Hadley's fan club.

ABC dismisses Australian Story complaint. The ABC has dismissed a complaint from Fairfax columnist Mike Carlton over a recent Australian Story profile of 2GB radio host Ray Hadley. Carlton, a former colleague of Hadley at Sydney station 2UE, alleged the program had misrepresented him by selectively editing his interview. He also claimed the overall program was biased and presented an overly favourable portrait of the divisive radio star. The ABC Audience and Consumer Affairs division did not uphold any aspect of Carlton’s complaint. The Audience and Consumer Affairs division stated in its decision yesterday:

“It was clear from the final broadcast that Mr Carlton was critical of Mr Hadley’s workplace behaviour and his broadcasting style. The program makers employed a reasoned and considered approach and the final program was not unfair in its presentation of Mr Carlton’s views …

“The program makers did not include every point Mr Carlton made in his interview in each of the different ways that he expressed himself, and there was no obligation for them to do so.  However, the program was under an obligation not to misrepresent Mr Carlton’s views, not to unduly favour one perspective over another and to present news and information with due impartiality. Based on a review of the program and the raw footage of the interview, Audience and Consumer Affairs was satisfied that these obligations were met.”

The day after the Australian Story profile went to air, Carlton told Crikey the program was “chocolate-box television – all soft in the centre”. “I said a lot of strong things about Hadley’s behaviour on and off the air – about his treatment of junior staff and his obsessive attacks on people like [Rob] Oakeshott and [Tony] Windsor,” Carlton said. “I described his program as a temple of hatred … By selectively and deceptively editing me, they recruited me into his fan club.” — Matthew Knott

Sun sets for Doyle at Seven? The Daily Telegraph suggested this morning that Melissa Doyle had been “boned” by Seven Network management and given the push from the co-hosting role on Sunrise. But you have to look at one of the authors of the piece, Annette Sharp, to realise there was probably a bit of the stiletto in the story.

Sharp reported in 2011 that Doyle had been talking to Nine (during contract renegotiations) and then wrote a snarky piece claiming Doyle’s $700,000 payday was “short of Kochie’s cool $1 million”. Sunrise‘s ratings have been in decline in all major cities in the past couple of years, with Nine’s Today closing the gap — Sunrise had an average five-city metro audience of 375,000 in last year, but so far this year that has fallen 5% to an average of 356,000. Today has increased its audience from 340,000 to 346,00, a rise of just 1.7%.

That means Today has not picked up many of the departing Sunrise viewers, who may have gone to ABC News Breakfast on ABC1 and ABC News 24, or pay TV (Sky News). There’s a hint of either Nine or Ten in the Tele story. The former EP of Sunrise, Adam Boland, is at Ten and putting together a breakfast program to take on Sunrise and Today. — Glenn Dyer

Rundle: don’t forget Iraq’s culture. In the not-at-all-superfluous-piece-of-directionless-online-flotsam The Daily Beast, Bernard-Henri Levy fulminates afresh on the West’s dereliction of duty in Syria — now assuaged apparently by opening the floodgates of arms to both sides, thus ensuring killing on a new scale — and focuses in particular on the fate of Aleppo, possibly the world’s oldest inhabited city, full of history, and about to get blown apart by Assad’s attempt to “retake” it.

To argue in favour of heritage rather than people may appear brutal, but one has some sympathy — we live only by our culture, a fact that has always been recognised in war. Both Rome and Paris were declared “open cities” in WW II to save them from destruction, and the way to save Aleppo would be for the rebels to do the same, in exchange for safe passage to Turkey. Levy’s solution is more in the line of bombing Damascus to save Aleppo, one suspects. But the crucial point may be this paragraph:

“Like the bombardment of Dubrovnik two decades ago, like the torching of the library of Sarajevo by Mladic’s arsonists, like the Buddhas of Bamiyan shattered by the bullets of the Afghan Taliban, like the sacred manuscripts of Timbuktu cast into the fire of iconoclasm by Malian fundamentalists, the surrender of Aleppo would be a crime against the human spirit, a disaster for civilization, an entire lobe of our collective memory lost in smoke and ash.”

Notice what’s missing here? How about the extensive and bloody-minded damage to ancient archaeological sites by the US Army in Iraq (including using a section of the Babylon dig as a truck park)? Or the nihilistic abandonment of the National Museum, containing thousands of artefacts from civilisations at the root of both Eastern and Western cultures — in favour of protection of the Oil Ministry? Levy’s commitment to human culture isn’t sufficient to stop him enrolling it in his usual chauvinistic caricature, a measure of how addled and desperate the fading cruise-missile “Left” have become — Guy Rundle

Courier-Mail turns on ‘hobos’. OK, so we get that The Courier-Mail didn’t have a lot of room for the heading for this story today. But did they have to refer to the homeless as “hobos”? 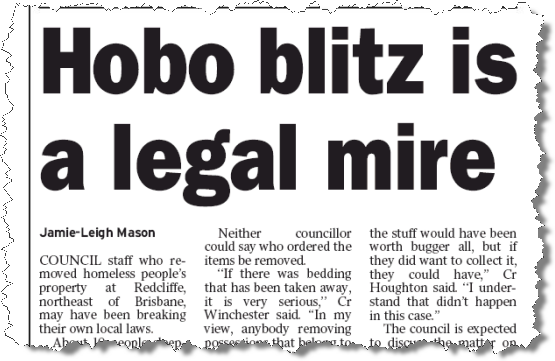 Punny pollies. Last Friday we introduced you to our talented intern, Joanna Robin, who draws clever puns on people’s names (check out what we mean on her blog here). We asked for your suggestions, and Crikey readers delivered. Herewith, the best three … Good morning, early birds. Perth residents are bracing for the hottest day on record, and the ATO will be given bolstered superannuation powers. It’s the news you need to know, with Rachel Withers.

Rundle: through a stone glass darkly, a labyrinth of humanity

In an apartment complex 11,000 years old, Crikey's writer-at-large discovers who we were, and who we will be.

Syria’s rich history and antiquities the latest casualty of war

Many of Syria's important archaeological sites have fallen into the hands of rebel fighters, says freelance correspondent Chris Ray. Is there any hope to save a millennia-old culture?

Speaking of stilettos – isn’t it funny how “sisters” rally around each other – usually to get closer to wield them?

@klewso – I’ve noticed that Women who do that get amply rewarded in the Media, Janet Albrechtson and Bettina Arnt being prime examples. Sad.