Divine spin: inside the Church PR machine — and why Pell must go

With a royal commission into child sex abuse starting work, the Catholic Church faces a tough task in PR and communications. Experts agree the Church has not handled the challenge well -- but is a seachange taking place? 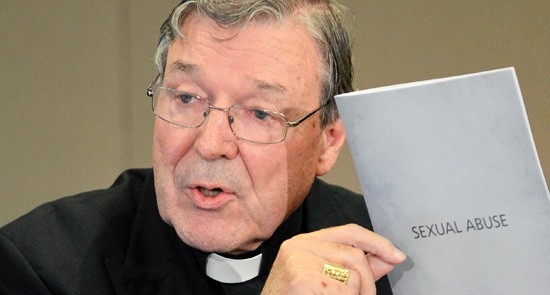 It may prove to be the defining image of Cardinal George Pell’s career: the day after Julia Gillard announced the royal commission into child abuse, a pugnacious-looking Pell fronted a packed press conference brandishing a mauve booklet. “SEXUAL ABUSE” screamed the front cover. At the bottom of the page – in tiny, barely readable letters — was the subtitle: “The response of the Catholic Archdiocese of Sydney.”

“It’s like the struggling politician photographed standing under an exit sign,” McClellan told Crikey. “The book should just have said ‘sorry’.”

While Pell said he welcomed the royal commission, his words and demeanour were anything but contrite. The extent of sexual abuse had been exaggerated by an anti-Catholic press campaign, he said; the Church objected to being portrayed as the “only cab off the rank”; strong procedures were already in place to tackle the problem.

McClellan, best known for advising Kristy Fraser-Kirk in her harassment suit against David Jones, says he was stunned by Pell’s “imperious smugness” that day. He was almost as aghast, six months later, when Melbourne Archbishop Denis Hart fronted the Victorian parliamentary inquiry into sex abuse. Hart admitted the issue had been an “awful blight” for the Church, and that abuse had been covered up. But he drew gasps from the crowd when, in response to questions about why it took so long to take action against an offender priest, he said with a smile: “Better late than never.”

Hart later apologised for the choice of words but the damage was done. “That’s what people would have seen on TV and they would have thought what a smarmy, pompous guy,” McClellan said.

Scrutiny of the Church and its leaders will only intensify as the royal commission, currently taking private testimony, ramps up. While secular institutions and other religious bodies will also be examined, allegations of abuse by the Catholic clergy are sure to dominate the headlines. According to crisis management experts, it’s hard to imagine a tougher public relations case than that facing the Church.

“All sorts of people will come forward who wouldn’t have otherwise; all sorts of emotions will be spilling out of people,” said Adam Kilgour, founder of communications firm CPR. “This is going to be a significant outpouring for the nation and the Catholic Church.”

McClellan said: “It’s been said the threat of sexual abuse is the greatest threat to the Church since the Reformation. I think that’s right on the money.”

The experts agree on the most crucial task: find a figure capable of rebuilding trust in the general community and restoring the faith of disillusioned Catholics. This person, they also agree, is not Pell. Despite his more prepared, more remorseful appearance at the Victorian parliamentary inquiry in May, the cynicism surrounding the Cardinal remains.

“Pell’s not the person you’d put forward as a spokesperson in these emotionally difficult cases,” said John Connolly, a veteran adviser to top business leaders. “He comes across as arrogant, not compassionate, and out-of-touch.”

According to Kilgour: “Every time Pell is on TV he hardens views. A lot of people see him as the embodiment of what’s wrong with the Church … The best thing the Catholic Church can do to come out of this is to get rid of George Pell. They need to get rid of him or stop him from becoming a spokesperson for the Church.”

“As long as he remains in office, Pell will remain a media magnet. Sources say the Cardinal relies primarily on internal advice from a close circle …”

In fact, the Church has already done exactly that — not that most of the public would know it. Only weeks after Pell’s combative November press conference, the Catholic bishops and religious orders announced they would create a new body to manage the Church’s response to the royal commission. As well as practical tasks (gathering documents, organising legal representation), the Truth, Justice and Healing Council will speak on behalf of the Church during the royal commission.

The council, which will receive funding of up to $4 million a year from the Church, is made up mostly of lay people, including experts on child welfare and trauma. When it comes to the grunt work, several of the main players have intriguing Labor ties.

Gilbert and Tobin partner Kate Harrison — a former chief-of-staff to Labor elder John Faulkner and adviser to Julia Gillard — is giving legal advice. Michael Salmon, a former spin doctor to the NSW Carr government, is working full-time as the council’s communications adviser. Salmon — who plays in a band originally named The Godwin Grech Experience — was called in by the PM’s office for advice earlier this year when Gillard’s Nova Peris “captain’s pick” caused controversy. He also advised the National Rugby League on managing the fallout from the peptides scandal.

The council’s CEO is Francis Sullivan, a former secretary general of the Australian Medical Association and CEO of Catholic Health Australia. In an interview with Crikey, there was no blame-shifting, no claims of media exaggeration. He’s adamant God’s representatives on earth must hold themselves up to the highest standards.

Empathy needs to be at the core of the Church’s response, Sullivan said: “It has to be clear that the most important thing is the people who are damaged — not the Church’s reputation. The truth needs to be revealed; the Church needs to acknowledge its areas of failing and mismanagement and cover-up … Until people in the community accept that the Catholic Church will be there for as it takes, we will be criticised for not getting it.”

Sullivan believes the existing Church protocols for dealing with abuse claims — Towards Healing and the Melbourne Response — are inadequate and has flagged the creation of a new, more independent system. This is a significant break from the current public stance of Archbishops Pell and Hart, who say the existing protocols work well.

The catch for Sullivan is that Church leaders, including Pell, retain the real power and the biggest public profile. While his council can make recommendations, it will be up to the Church whether they are implemented.

“She’s unafraid to be bluntly obstructionist when she doesn’t want a story to run,” claimed a journalist who has written extensively on the Church. While the relationship between Pell’s office and Fairfax journalists has often been strained, News Limited has proven friendlier. Pell pens a weekly column for News’ Sunday Telegraph and his authorised biographer Tess Livingstone is a journalist at The Australian.

The Melbourne archdiocese has called on the counsel of Royce Communications spin doctor Peter Mahon for the last 16 years, but is said to be increasingly reliant on internal advice. Earlier this month, Archbishop Hart appeared in a Herald Sun splash in which he asked for forgiveness and said he felt personally shamed by Church abuse.

This is the apologetic, empathetic approach that crisis management expert McClellan recommends. But he stresses only actions, such as boosting compensation levels and overhauling complaint mechanisms, can restore the Church’s reputation. “It can’t just be rhetorical. Just saying, ‘we’ll do better’ isn’t good enough,” he said.

Are last night's AUSTRAC revelations the holy grail (or grassy knoll) for George Pell supporters? Plus, Michaelia Cash finds a subject she's an expert on, and Jeffrey Toobin gets an unexpected defence.

This is not the end. Other cases will be brought, and serial predators who enjoyed the protection of the church will be unmasked.

The last lesson from my old teacher, George Pell

One of George Pell's former pupils reflects on the gut feelings he once brushed aside.

I’m a bit mystified by the silence of the right on this issue. If it were Aboriginal communities in question they’d be sending in Mal Brough with the Military and putting up signs outside churches. The usual voices on any suspected indigenous child abuse seem very silent in this…be interested what the authors think on this. And what specifically does our next PM think of the latest shredding of documents scandal in NSW?

To me, George Pell has always seemed to speak with all the confidence and certainty of the truly ignorant.

And as a genuine question to anyone who might know: In what century, did the church first start investigating their problem with abusive priests?

Following his statement that he “welcomed” the Royal Commission I trust he went directly to Confession.

As if things aren’t bad enough it’s now revealed he writes a column for News Ltd.

Thank you to Matthew Knott for a thoughtful and balanced article. His conclusion that George Pell must go is the only course of action open to the Cardinal following both his egregious lack of oversight of the abuse scandal and his obvious inability to provide resolution in a generous manner to those who have suffered and in an accountable way for the abusers.
Pell should lead the rest of his life as a Parish Priest; where he would learn that the lay community (and most of the clerics)of the Church find his actions reprehensible and diametrically opposed to the teachings of Christ.
I note that Tony Abbott no longer appears to be seen in his presence, maybe that says it all?

Some wonder why catholic Christianity is withering on divine?