The Australian has declared war on Clive Palmer of late, with "national chief correspondent" Hedley "Lamarr" Thomas turning his forensic skills onto Clive of China.

The Oz v Palmer: a changed tune. The Australian has declared war on Clive Palmer of late, with “national chief correspondent” Hedley “Lamarr” Thomas turning his forensic skills onto Clive of China. Hedley led The Oz‘s attack on the Prime Minister over the Australian Workers Union matter last year, although sadly never secured that extended sit-down interview with her that his editors insisted was truly necessary to clear the matter up.

This laudable effort at scrutiny of Palmer — which evens extends to the poor man’s Gerard Henderson types at Cut & Paste conjuring an ABC / Palmer conspiracy — is something of a turnaround for The Oz, which last year lauded Clive for having “created thousands of jobs and opportunities on his path to riches” and suggesting Australians admired Clive even while laughing at his “penchant for outrageous jibes”. The Oz had leapt to the big fella’s defence because he’d been attacked by Wayne Swan and Julia Gillard. As it wrote:

“A government that has previously sidled up to the wealthy elite, such as Cate Blanchett on climate change, and has wasted taxpayers’ money with reckless abandon cannot suddenly don a dirty pair of overalls and wave a shovel at Carbon Clive.”

The Oz might piously insist Clive is now fair game for scrutiny given he’s standing for public office. As the bankroller of the Liberal National Party and a key figure in the Queensland mining industry, Clive has always merited scrutiny.

What’s changed of course is that Clive is no longer The Oz‘s enemy’s enemy, but the enemy of friend Tony Abbott, and thus now must become a target; at The Oz, scrutiny is only ever applied to one’s opponents — which is why Hedley displayed such a lack of interest in Abbott’s somewhat more contemporary legal difficulties over One Nation, only managing one piece on them compared to the dozens of articles he poured out on the Prime Minister’s woes. Still, you take the media doing its job wherever you can find it these days, right? — Bernard Keane

Trading begins in split News Corp. Tonight we will get an idea of the worth of the hived-off News Corporation divisions. Trading in the securities of the two companies starts ahead of the formal division on June 28. News Corp closed at $US31.69 in New York overnight and at $A32.79 on the ASX yesterday.

The ASX listed the two stocks under the codes NNS (new News Corp) and NWS (for the about-to-become 21st Century Fox). Just before 11am, new News Corp had an implied value of $3.15, the rest (21st Century Fox) had a value of $29.64. The $3.15 is the difference between the NWS price and Tuesday’s closing price for the old company of $A32.79. You can see from those prices where investors see the value and growth to come. Some brokers give the new News Corp a theoretical per share value of around $17 — no wonder the Murdoch empire set up a $US500 million ash pile to support the new News Corp shares in a buyback for the next few months to absorb the waves of selling that will come.

Yesterday, Sydney-based media analyst Alice Bennett of the Commonwealth Bank wrote the new News Corp newspaper-based business will suffer a fall in earnings over the next two years (2013-14 and 2014-15) because of the need for more cost cutting. Stronger earnings from the online real estate operation REA Group are expected to be more than offset by negative factors for the next year. CBA has also forecast declines in earnings and profit for the new News Corp until 2015-16, when it expects a stabilisation and subsequent growth.

In May News Corp wrotedown the value of the Australian newspapers by a further$US1.2 billion to $US1.4 billion, on top of a writedown of around $US2 billion in 2011-12. News Corp said the Australian papers had seen a 5% fall in ad revenues in the nine months to March (a cost of well over $US200 million). From what rival Fairfax told investors at a briefing earlier this month, those weak conditions have continued into the current quarter.

And phone-hacking continues to haunt the group. The first case from the US — a “stunt double” for film star Angelina Jolie — has been filed in the US District Court, claiming investigators and journalists working for News’ UK tabloids accessed voice mail messages left by Jolie and others for stuntwoman Eunice Huthart. In London, another journalist at The Sun has been charged in connection with illegal payments for information paid to public servants, police and others. Chief foreign correspondent Nick Parker is accused of conspiring to pay a prison officer for leaks about celebrities. He’s the sixth current Sun journalist facing charges under Operation Elveden. — Glenn Dyer

Video of the day. Why newspapers have no future — it’s very hard to eat an ice cream while reading them. This Buster Keaton-esque short, via The Huffington Post, demonstrates why tablets work better … 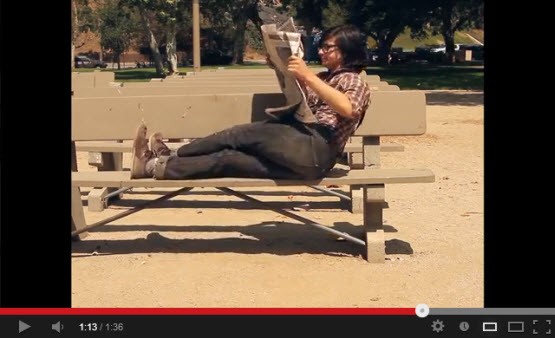 As Clive Palmer loses his lockdown challenge against the WA government, let's look back on the past decade or so of Palmerisms.

Bat researchers are social distancing (for the bats' sake), while Victoria flexes the police state and billionaires get some valuable public support.

Where did Palmer’s death tax lie come from — and why is it so effective?

Clive Palmer has reignited the 'death tax' myth ahead of the Queensland election. Where does this lie come from, and why does it work?

If Palmer was going to impact the Labor vote, would Lamarr’s “mind be a raging torrent, flooded with rivulets of thought cascading into a waterfall of creative alternatives”?

…. how did Taggart describe that in Blazing Saddles?

Comic genius Josh Faden…and 126 likes on facebook ….yep that replaces the newspaper and Crikey pinched the Huff’s copy, and they probably pinched it from someone else