S-xism among stockbrokers? Last Thursday night Star City Casino was overflowing with 800 stockbrokers (with lots of wannabe alpha males among them) who were getting served plenty of booze by scantily clad waitresses. Yes, it was the 20th anniversary of the Stockbrokers Awards Charity Dinner, a night known for its drunkenness and violence in past years. We’re hearing rumours about the misogyny and s-xism on display there, but we’d like some more details. Can you tell us about the “stockbrokers’s assistant” award? We’ll keep your identity anonymous …

What happened to Newspoll Tuesday? A conspicuous lack of Newspoll in The Australian today got conspiracy theories flowing this morning. Could this be a Murdoch ploy to manipulate the public mind and bring down the government?

Tips called Sydney’s Newspoll office and was told that on the occasion of a long weekend Newspoll sometimes decides to publish three weeks apart to avoid Nielson poll publication weeks. Seems conspiracists can put their minds at ease until results are released next week …

Lonely world at Lonely Planet. Back in March, travel guidebook behemoth Lonely Planet was sold by parent company BBC to a little-known young American billionaire (Crikey covered the story here, if you need a refresher).  Just a few months in, and we’ve got one tipster who claims the Planet is in trouble:

“About to be an exodus of staff from Lonely Planet globally, including Melbourne head office, with control of the company now in the hands of a 25-year-old American with no business experience, who in turn has vested control to a Melbourne manager [who is not well liked and] … has seen off the UK head, the US head, the global publisher (well regarded) and the HR head, with promise of more to come. How do you sustain a global company in this climate with such an exodus of senior experience and such a gulf at the top?”

Yet Tips queried other contacts within the LP office, who all flatly denied the allegations. As one replied: “The person in question … is well liked and well respected here. I don’t call two people leaving — in several months, as in they will be here for a few more months yet — an ‘exodus’.”

Do you work for LP — or have insider goss on how it’s going with the new boss? Clearly there’s some disagreement on what’s going on in there. Tip us off anonymously …

Computershare no more in Melb. Rumours over the weekend that Computershare, an investor services business whose founder Chris Morris bought a $6.25 million Queensland island resort two years ago, will be closing its Johnston Street call centre in Melbourne. Computershare has apparently purchased two centres in India and the Philippines, which will handle all investor and shareholder calls and shareholder transactions from now on. The potential closure would leave the 70-plus employees of the Melbourne office jobless.

“They are trying to keep this quiet from the little shareholders but big client companies (top 10) that they deal with have all agreed to the changes. Seventy of jobs will be lost, no redundancies offered, natural attrition should act in downsizing and many loyal older staff who have been there for many years treated with arrogance and words like it will boost Computershare’s profits. Fat managers at top keep their jobs and big fat paypackets. They want it kept quiet — so we need your help Mr Crikey…”

It’s actually Ms Tips, thank you very much, but you’re right about the quiet part. We tried to contact the Melbourne office, but the operator denied any knowledge of the closure and told us she would be unable to connect us to anyone who could help unless we provided the first and last name of the person who told us the information. Mr or Ms Tipster, send more help.

What has the government ever done for us? “Built in a fit of rage over the weekend” is how one reader described the website he created, which lists 108 achievements by the current government (think seat on the UN Security Council, DisabilityCare, mining tax, etc). As the What’s The Government Ever Done For Us website tagline reads: “The Australian government, a coalition of Labor, Greens and Independents, has accomplished quite a lot, despite what the media might tell you”. Can’t say we didn’t tell you …

Labor faction wars. An internal factional war is brewing within the NSW Left (yes, it seems in NSW Labor, everyone hates everyone). Recently an email was sent out over the NSW Young Labor Left email lists complete with factional logo inviting everyone to the Young Labor Left Budget Drinks at Parliament House: 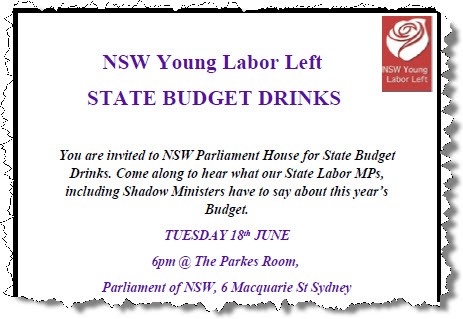 It turns out the event was organised in secret by the Ferguson Faction and was originally only sent to a select number within the caucus while being passed off to its recipients, mostly young caucus members, as a formal Young Left event. The majority of members from the Left only found out about the event after a new member (unaware of the factional tension) asked a member of the general Left if the general Left member was going and forwarded the invitation email. Senior Young Ferguson organisers defended their actions over the email list as normal and say they were entitled to use the factional name and logo without permission and to hold closed events if they wanted to. Young Labor Left sources view the email as part of continual attempts to destabilise the Young Left and gain greater power within the Senior Left Faction for the Fergusons.

There'll be another Adem Somyurek along before too long. Our modern political parties are designed to produce them.

Glee and envy greet the political death of a Labor warlord. But is this really the end?

Labor factional power broker Adam Somyurek has been sacked from the Andrews government following a damning investigation by Nine. So what's next for Labor'?

Labor is showing every sign of abandoning the discipline it showed from 2013-19 and is busily promoting mediocrities.

Re the Computershare tip & what’s happening in management circles I wonder if u read this great piece?
http://newmatilda.com//2013/06/14/sack-bosses-theyre-killing-economy