A silent protest in Turkey has sparked a global social media sympathy campaign. A defiant stand by one protester in Taksim Square overnight has reignited the campaign, writes Turkish-Australian Erdem Koç.

As anti-government protests continue to gain momentum in Turkey, they are also getting more creative.

Last night, in the middle of the now infamous Taksim Square, a man in a white shirt stood in complete stillness, staring at the large Turkish flag and poster of Mustafa Kemal Ataturk on the nearby Ataturk Cultural Centre. The man had a sports bag to his side, planted on the floor. People in and around Taksim Square initially took little notice of the man.

Hours passed. The Turkish police, who have been on guard in Taksim to prevent protests, eventually noticed the man and headed over. They asked him several questions and searched his bag. The man didn’t respond, continuing to stare into the distance. 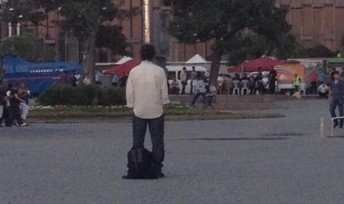 It soon became obvious the man was staging a new kind of protest — one he hoped would encourage a new, creative way of voicing opposition to the ongoing police brutality and oppression of basic human rights in Turkey.

Meanwhile, the hashtag #duranadam, or standing man, became the number one trending topic worldwide on Twitter. The power of the silent protest quickly went viral on social media. People from all around Turkey and the world have posted images of their own “standing man” photo … As support for the protest grew on social media, so did the actual protest at Taksim Square. Hundreds of passers-by stood next to the man in the white shirt, staring in stillness in the same direction.

A person claiming to be the man’s housemate wrote on Twitter that the protest would continue for the next month, and that every three hours, there’d be a shift change, where someone else would take over the protest.

But it was short-lived. Police — despite their initial confusion over what to do — arrested the man in the white shirt, as well as the several people around him.

He was let go a few hours later. When asked by police why he was standing there, he replied: “I’m waiting for my friend.” The police asked who his friend was, to which the man replied: “Ethem Sarisuluk”. Sarisuluk is the latest casualty of police violence in Turkey who died on the weekend following being shot at his head with a tear gas bottle.

The single man’s act of defiance has now turned into a global phenomenon, with photos being posted on Twitter. Or as the country’s Prime Minister Recep Tayyip Erdogan refers to it, the menace of society.

Good morning, early birds. Scott Morrison intends to push for a technology target rather than agreeing to net-zero emissions by 2050, and the Australian media has given Holden a send-off. It's the news you need to know, with Chris Woods.

Good morning, early birds. Turkey has agreed to a permanent ceasefire following its invasion of northern Syria, and a former ASIO official is charged with breaching secrecy laws. It's the news you need to know, with Rachel Withers.

Good morning, early birds. Boris Johnson's best bet for a Brexit deal hangs in the balance, and the US negotiates a ceasefire in northern Syria. It's the news you need to know, with Rachel Withers.

I wonder what how long it would take to be arrested in the “free” west?